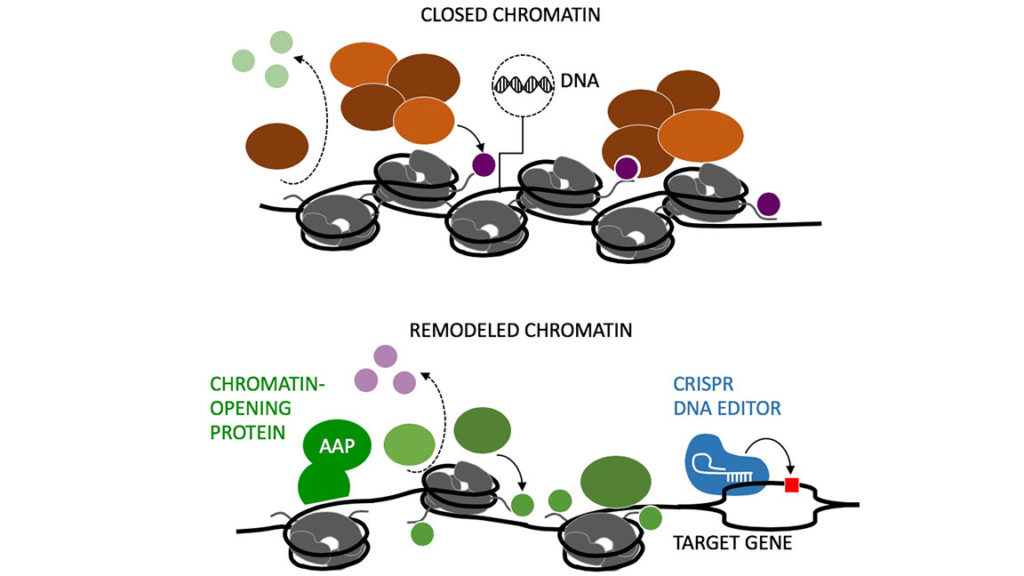 WASHINGTON, D.C., January 14, 2020 — Protein editorial assistants are clearing the way for cut-and-paste DNA editors, like CRISPR, to access previously inaccessible genes of interest. Opening up these areas of the genetic code is critical to improving CRISPR efficiency and moving toward futuristic, genetic-based assaults on disease.

The DNA-binding editorial assistants were devised by a U.S.-based team of bioengineers, who describe their design in APL Bioengineering, from AIP Publishing.

“The innovation in this paper is having another protein co-delivered with the CRISPR DNA editor, moving chromatin packaging out of the way, so CRISPR has greater access to the DNA,” said lead author Karmella Haynes, from Arizona State University and Emory University.

DNA doesn’t usually sit inside cells as a freely accessible double helix. It’s heavily wrapped up in a protective package called chromatin, which controls what genes are activated or silenced by a cell at any moment in time. Unfortunately, this packaging prevents scientists, who are accessing DNA, from correcting disease-causing mutations.

Haynes describes chromatin blocking as “the elephant in the room” in CRISPR discussions, but it wasn’t directly proved until 2016, when Haynes’ team conducted some clever experiments capturing the effect. Her team is trying to fix the problem by investigating different methods of chromatin disruption.

They used a well-established artificial system, where chromatin packaging can be turned on or off for one gene — luciferase — which codes for an easily detected luminous protein. When examining the chromatin-packed state, the team found several editorial assistants, which are called DNA-binding transiently expressed activation-associated proteins (AAPs), disrupted the chromatin and enabled CRISPR to successfully edit the luciferase gene.

“The idea is that if CRISPR needs to bind in the middle of a gene but can’t bind close enough to edit the mutation, you could send in our chromatin-opening protein to right outside that hard-to-bind region, rearrange the chromatin, and make the DNA across that gene more accessible for CRISPR to edit the gene,” explained Haynes, who is keen for others to use her system to improve CRISPR efficiency. She pointed out the AAPs can be adapted to target different genes, simply by switching the DNA-binding regions.

“It’d be interesting to find out whether one type of AAP is more effective at disrupting chromatin at some genes versus others. Or whether combining proteins together might further enhance CRISPR editing,” said Haynes. “I envision there being a whole catalog of CRISPR cofactors that can be used to enhance CRISPR activity.”

The article, “Site-directed targeting of transcriptional activation-associated proteins to repressed chromatin restores CRISPR activity,” is authored by Karmella A. Haynes, Rene Daer, Fatima Hamna and Cassandra M. Barrett. The article will appear in APL Bioengineering on Jan. 14, 2020 (DOI: 10.1063/1.5127302) After that date, it can be accessed at https://aip.scitation.org/doi/10.1063/1.5127302.

APL Bioengineering is an open access journal publishing significant discoveries specific to the understanding and advancement of physics and engineering of biological systems. See http://aip.scitation.org/journal/apb.