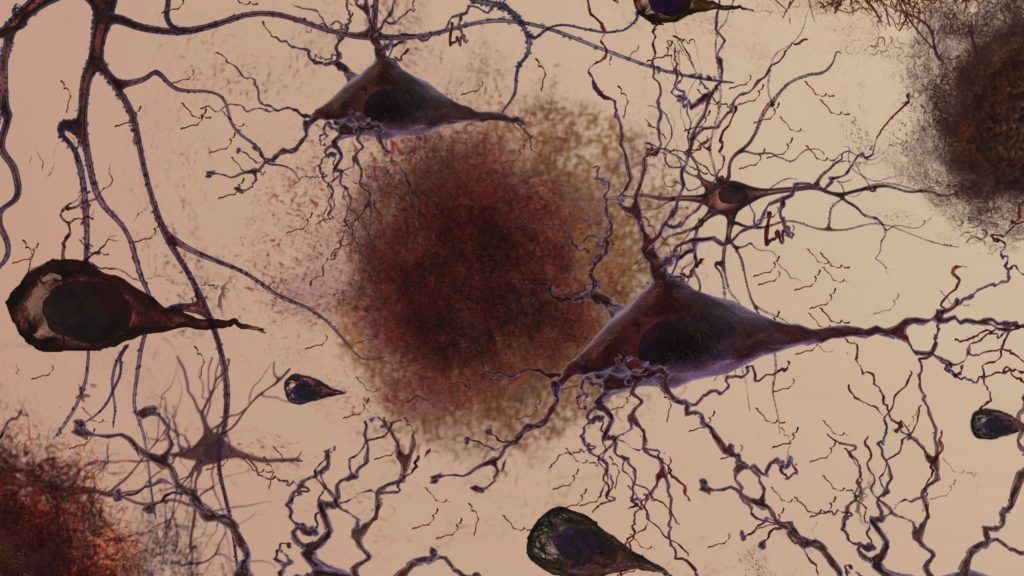 Writing in the December 30, 2019 online issue of Neurology, researchers at University of California San Diego School of Medicine and Veterans Affairs San Diego Healthcare System report that accumulating amyloid — an abnormal protein linked to neurodegenerative conditions such as Alzheimer’s disease (AD) — occurred faster among persons deemed to have “objectively-defined subtle cognitive difficulties” (Obj-SCD) than among persons considered to be “cognitively normal.”

Classification of Obj-SCD, which has been previously shown to predict progression to mild cognitive impairment (MCI) and dementia, is determined using non-invasive but sensitive neuropsychological measures, including measures of how efficiently someone learns and retains new information or makes certain types of errors.

The new findings, say authors, suggest that Obj-SCD can be detected during the preclinical state of AD when amyloid plaques are accumulating in the brain, neurodegeneration is just starting, but symptoms of impairment on total scores on thinking and memory tests have not yet been recorded.

“The scientific community has long thought that amyloid drives the neurodegeneration and cognitive impairment associated with Alzheimer’s disease,” said senior author Mark W. Bondi, PhD, professor of psychiatry at UC San Diego School of Medicine and the VA San Diego Healthcare System. “These findings, in addition to other work in our lab, suggest that this is likely not the case for everyone and that sensitive neuropsychological measurement strategies capture subtle cognitive changes much earlier in the disease process than previously thought possible.

“This work, led by Dr. Kelsey Thomas, has important implications for research on treatment targets for AD, as it suggests that cognitive changes may be occurring before significant levels of amyloid have accumulated. It seems like we may need to focus on treatment targets of pathologies other than amyloid, such as tau, that are more highly associated with the thinking and memory difficulties that impact people’s lives.”

Study participants were enrolled in the Alzheimer’s Disease Neuroimaging Initiative (ADNI), an on-going effort (launched in 2003) to test whether regular, repeated brain imaging, combined with other biological markers and clinical assessments, can measure the progression of MCI and early AD.  Seven hundred and forty-seven persons were involved in this study: 305 deemed cognitively normal, 153 with Obj-SCD and 289 MCI. All underwent neuropsychological testing and both PET and MRI scans.

The research team found that amyloid accumulation was faster in persons classified with Obj-SCD than in the cognitively normal group. Those classified as Obj-SCD also experienced selective thinning of the entorhinal cortex, a region of the brain impacted very early in Alzheimer’s disease and associated with memory, navigation and perception of time. Persons with MCI had more amyloid in their brain at the start of the study, but they did not have faster accumulation of amyloid compared to those with normal cognition. However, those with MCI had more widespread temporal lobe atrophy, including the hippocampus.

Broadly speaking, scientists believe that for most people, AD is likely caused by a combination of genetic, lifestyle and environmental factors. Increasing age is a primary, known risk factor. The amyloid hypothesis or amyloid cascade model posits that accumulating amyloid protein plaques in the brain kill neurons and gradually impair specific cognitive functions, such as memory, resulting in AD dementia. However, many scientists are now questioning the amyloid hypothesis given the large number of clinical trials in which drugs targeted and successfully cleared amyloid from the brain but did not impact the trajectory of cognitive decline.

The ability to identify those at risk for AD before significant impairment and before or during the phase of faster amyloid accumulation would be a clinical boon, said authors, providing both a way to monitor disease progression and a window of opportunity to apply potential preventive or treatment strategies.

Currently, both approaches are limited. Some risk factors for Alzheimer’s can be minimized, such as not smoking, managing vascular risk factors such as hypertension or following a healthy diet with regular exercise. There are a handful of medications approved for treating symptoms of AD, but as yet, there is no cure.

“While the emergence of biomarkers of Alzheimer’s disease has revolutionized research and our understanding of how the disease progresses, many of these biomarkers continue to be highly expensive, inaccessible for clinical use or not available to those with certain medical conditions,” said first author Thomas, PhD, assistant professor of psychiatry at UC San Diego School of Medicine and research health scientist at the VA San Diego Healthcare System.

“A method of identifying individuals at risk for progression to AD using neuropsychological measures has the potential to improve early detection in those who may otherwise not be eligible for more expensive or invasive screening.”