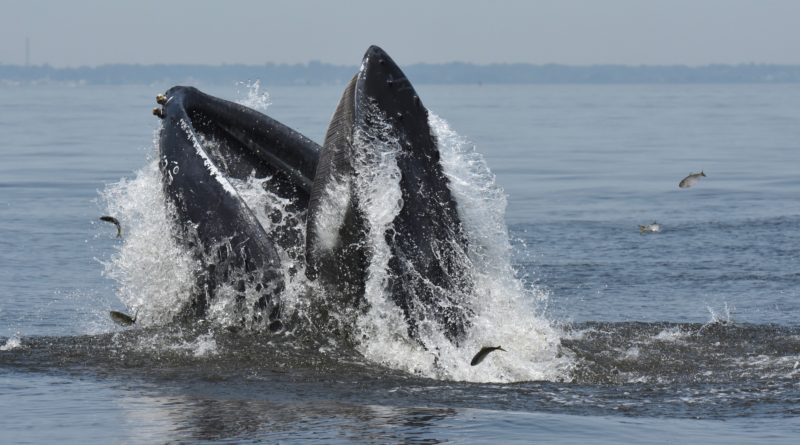 There have been a phenomenal number of whale sightings in the waters off the coast of New York and New Jersey this summer, and those who take the time to look from shore might be lucky enough to spot one.

Experts at the New York Aquarium recommend ten locations where people might have the best chance to see a whale from shore–including the roof of its own Ocean Wonders: Sharks!

Dr. Howard Rosenbaum, a New York Aquarium senior scientist and director of the WCS Ocean Giants Program, confirms his team has had an impressive number of whale and dolphin sightings during the past several weeks.

Said Rosenbaum: “Our research and conservation efforts in the New York Bight this summer have led to an impressive number of sightings of multiple species—some very close to shore. We are actively working to generate the science needed to better protect them.”

Said Jon Forrest Dohlin, WCS Vice President and Director of the New York Aquarium: “Sighting a whale from shore can be an unforgettable experience and a great way to connect with the diversity of local marine life. Observing any type of wildlife can take time and patience, but we know that they are out there. One spot I would recommend to search for whales and dolphins from shore would be from the elevated waterfront position atop of the New York Aquarium’s Ocean Wonders: Sharks!”

New York Aquarium scientists have been studying marine wildlife within the New York Bight as part of the New York Seascape program. The bight includes the waters from Montauk, Long Island to Cape May, New Jersey. The program’s goal is to better understand the marine life in New York waters in an effort to ensure a healthy ocean habitat for local marine species, species that are seasonal, and other species passing through.

Scientists are documenting how some whales and dolphins are increasingly using the waters around New York.

Until recently, sighting a whale from Coney Island or any of the beaches near New York City might have been considered a rare occurrence. In recent years, regulations to protect forage fish populations, including the Atlantic menhaden, have maintained food sources for whales, dolphins, and other predators. Over the last decades, the waters around the city have become ‘healthier’ due to past environmental legislation such as the Clean Water Act, and recovery of species has been helped by the Marine Mammal Protection Act and the Endangered Species Act.  Other possible factors, including shifts in oceanographic conditions due a changing climate have been known to alter local and regional ecosystems, and may be contributing to some whale and dolphins increasingly being sighted in these waters.

With all the excitement for these sightings, there are still issues and concerns confronting whales and other marine life such as risks of ship-strikes, changes to prey (fish) populations, potential impacts from Ocean Noise, and coastal development.

Tips on Seeing Whales From Shore:

Sighting whales from shore requires patience and some luck and could happen anywhere along the coast. If lucky enough to snap an image of a whale or dolphin, post it online and tag @nyaquarium and @WCSocean with the hashtag #WhalesFromShore.

What to Look For:

The waters of New York Bight (the 16,000-square-mile seascape stretching from Cape May, New Jersey to Montauk, Long Island) are home to many species of whale and dolphin (known collectively as cetaceans), but people looking for whales from shore are most likely to see two species:

Other Whales in the New York Bight:

Any beach goer can become a whale watcher with a little time and effort. The surface of the sea may seem uneventful for much of the time; scanning slowly from left to right, both close to the shore and near the horizon, for longer periods can yield surprising sights. Recommended items include:

About the New York Aquarium:

The New York Aquarium is located along Brooklyn’s famed Coney Island Boardwalk. The Wildlife Conservation Society (WCS) manages the aquarium along with four zoos in New York City – Bronx Zoo, Central Park Zoo, Prospect Park Zoo, and Queens Zoo. WCS conservationists, curators and animal care staff work to save, propagate, and sustain populations of threatened and endangered species around the world and here in New York. The aquarium connects visitors to marine life in New York waters and around the world through innovative exhibits and world-class animal care, educates more than 60,000 youth and adults in our formal education programs and conducts field research and conservation policy action in the waters of New York. In the summer of 2018, Ocean Wonders: Sharks! opened at the aquarium –  a 57,500 square-foot three-story facility that features 18 species of sharks and rays and thousands of schooling fish. The aquarium is accredited by the Association of Zoos and Aquariums (AZA). It is open every day of the year.  For more information, visit www.nyaquarium.com. Members of the media should contact jdelaney@wcs.org (718-265-7908); mpulsinelli@wcs.org (718-220-5182); or mdixon@wcs.org (347-840-1242).

MISSION: WCS saves wildlife and wild places worldwide through science, conservation action, education, and inspiring people to value nature. To achieve our mission, WCS, based at the Bronx Zoo, harnesses the power of its Global Conservation Program in nearly 60 nations and in all the world’s oceans and its five wildlife parks in New York City, visited by 4 million people annually. WCS combines its expertise in the field, zoos, and aquarium to achieve its conservation mission. Visit: newsroom.wcs.org. Follow: @WCSNewsroom. For more information: +1 (347) 840-1242.