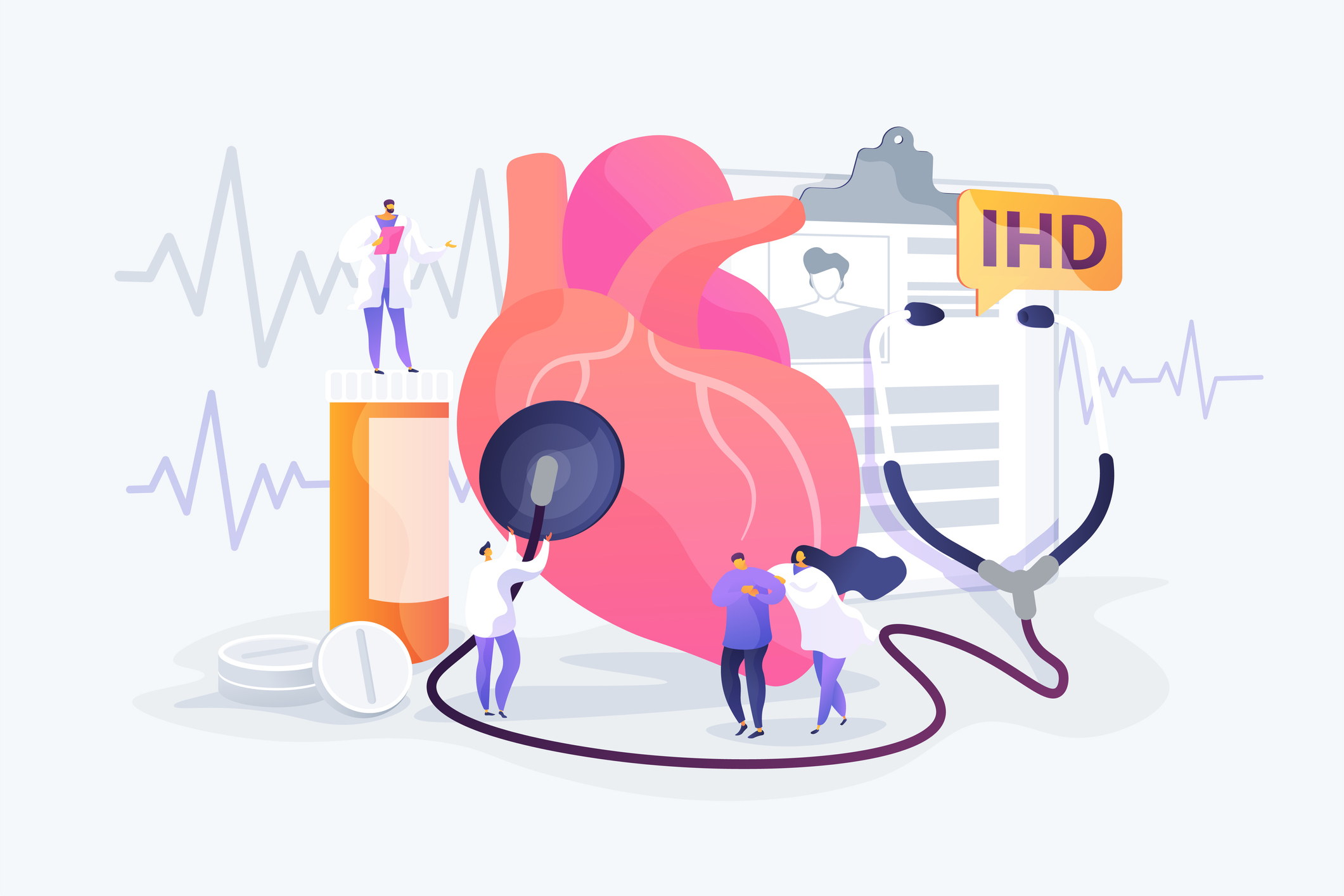 New study results found that guideline-directed medical treatment is as effective as invasive procedures, such as coronary stenting, at preventing heart attack, stroke, and death in patients with stable coronary artery disease (CAD).

Although the research supports a conservative approach to heart disease care, the study results also raise questions for people who are already receiving treatment for CAD, as well as those who have already had a surgical procedure to treat their condition. Here’s what people need to know about the ISCHEMIA study results that were presented at the last American Heart Association Annual Meeting.

What is the ISCHEMIA study?

Coronary stenting is a minimally invasive surgical procedure where an interventional cardiologist restores normal blood flow to the heart by opening a blocked artery with a stent. Coronary artery bypass grafting (CABG) is an open surgery where a cardiac surgeon uses the patient’s own arteries or veins to route blood around (bypass) blockages in the arteries supplying blood to the heart.

Who was included in the ISCHEMIA study?

All ISCHEMIA study participants were diagnosed with stable CAD using noninvasive testing methods such as a stress test, which shows how well your heart works during physical activity. CAD is considered to be stable when someone has not had a heart attack and does not have worsening symptoms — such as angina (chest pain) or shortness of breath.

People who had unstable CAD, heart rhythm disorders, heart failure, advanced chronic kidney disease, and heart valve disease — as well as people who had a heart attack or invasive surgical procedure — were not included in the study.

Does the ISCHEMIA study say that medication is better than surgery for people with CAD?

It is important to understand that the ISCHEMIA study results suggested equal effectiveness in preventing three events — heart attack, stroke, and death — in people who have stable CAD. The study did not suggest that medication is better than invasive procedures, or that invasive procedures were worse than medication. Also, the ISCHEMIA study results only apply to patients with stable CAD. The results do not apply to people who have heart failure, a history of heart attack, symptoms that are increasing in severity, or other more life-threatening cardiac conditions.

Are there some situations when surgery may be more beneficial for CAD?

Coronary stents and other surgical interventions, which are types of revascularization, may provide better symptom relief than medications for people with stable CAD who have chest pain and shortness of breath. Generally, the more chest pain a patient has, the more likely they are to benefit from revascularization. In fact, 23 percent of ISCHEMIA study participants who were initially treated with only medication therapy ended up having a surgical procedure to treat lingering symptoms.

Additionally, revascularization may improve quality of life by reducing the number and amount of medications required to manage stable CAD. For some people, effective and safe medication management can be challenging.

Are the ISCHEMIA study results valid?

Yes. The ISCHEMIA study was a prospective, randomized control trial — the gold standard for medical trials. Also, the study included a large enough number of participants to validate the data.

Further, previous studies comparing the effectiveness of medication and revascularization intervention only looked at patients who had mild CAD. The ISCHEMIA study included a subset of patients who were not previously studied — patients with moderate to severe CAD — and, as a result, provided new data for a different patient population.

How is CAD usually treated?

For people with stable CAD who do not have any other cardiovascular conditions, treatment includes aspirin to reduce the risk of blood clots and statins to lower levels of artery-clogging “bad” cholesterol. Other medications, such as beta-blockers, calcium channel blockers, or nitrates, may be prescribed too.

The ISCHEMIA study results validate the evidence-based, guideline-directed, conservative approach that the cardiovascular specialists at Nuvance Health have traditionally used to treat patients with CAD. Therefore, the ISCHEMIA study results will not significantly change the approach to CAD care at Nuvance Health. At Nuvance Health, cardiovascular care is highly personalized. Our care teams develop treatment plans that reflect each patient’s unique condition, symptoms, and preferences.

What’s the bottom line regarding the ISCHEMIA study?

The study results show that invasive procedures should be used sparingly in patients who have stable CAD. For this group of people, conservative treatment with medication should be considered before revascularization with stents or surgery.

Dr. Yekta practices general and interventional cardiology at Nuvance Health’s Danbury Hospital and Norwalk Hospital in Connecticut. He started his career as a noninvasive cardiologist. He also pursued additional training in interventional cardiology. Dr. Yekta’s unusual career path makes him uniquely qualified to comment on the ISCHEMIA study results, which compares different approaches to the treatment of stable CAD.