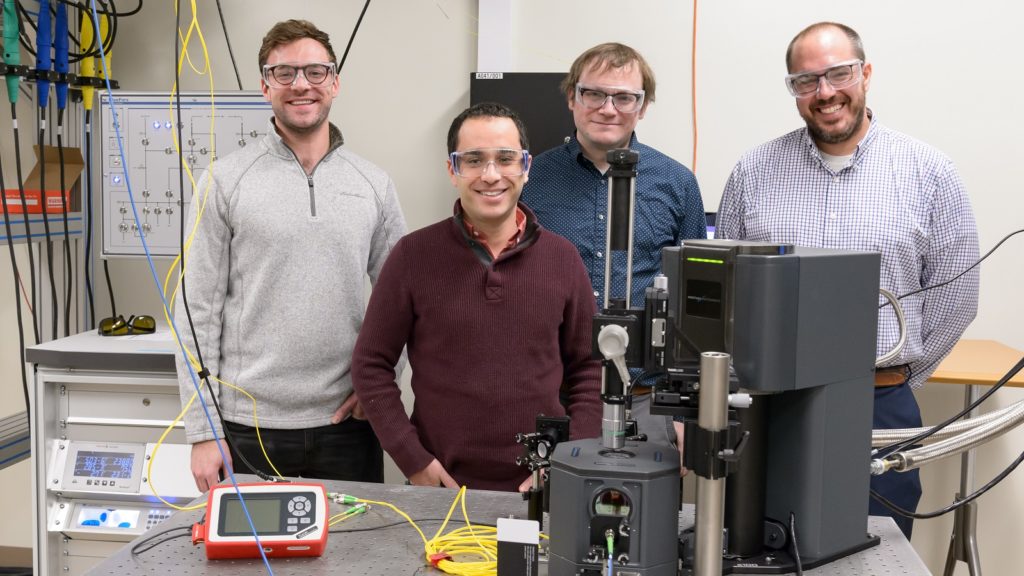 Scientists from the U.S. Department of Energy’s (DOE) Argonne National Laboratory and the University of Chicago launched a new testbed for quantum communication experiments from Argonne last week.

The Argonne quantum loop consists of a pair of connected 26-mile fiber-optic cables that wind circuitously between Argonne to the Illinois tollway near Bolingbrook, IL, and back. At 52 total miles, it is currently among the longest ground-based quantum communication channels in the country.

The loop will serve as a testbed for researchers interested in leveraging the principles of quantum physics to send unhackable information across long distances. Researchers at Argonne and UChicago plan to use the testbed to explore science underlying quantum engineering systems and to harness the properties of quantum entanglement, a phenomenon Albert Einstein famously characterized as “spooky action at a distance.” Quantum entanglement links two (or more) particles so that they are in a shared state — such that whatever happens to one immediately affects the other, no matter how far they have travelled apart.

“Inaugurating this quantum loop is a significant step for Chicago and the nation in building a large-scale quantum network that can enable secure data transmissions over long distances,” said principal investigator David Awschalom, senior scientist in the Materials Science Division at Argonne, Liew Family Professor in Molecular Engineering at the University of Chicago, and director of the Chicago Quantum Exchange. “The loop will enable us to identify and address challenges in operating a quantum network and can be scaled to test and demonstrate communication across even greater distances to help lay the foundation for a quantum internet.”

Argonne scientists Joe Heremans, Alan Dibos and Gary Wolfowicz, who worked on the quantum loop project, demonstrated the operation of the testbed by generating and transmitting optical pulses through one and then both fiber loops. They witnessed a delay of 200 microseconds for the transit time of the laser pulse along one fiber loop, which is consistent with the speed of light in the glass fiber.

They also began to use the loop for a series of experiments, including transmitting signals from photons emitted from ensembles of ions. These ions can be used as a quantum memory for the network. A functional quantum memory, which entails the storage and retrieval of quantum states, is a key technological advance needed for quantum communication and a quantum internet.

“We will need many of these quantum memories spaced out over about 100 km to relay the quantum signal through a network. The quantum loop enables us to test and refine this quantum memory technology before deploying it in large scale,” said Tian Zhong, scientist in the Nanoscience and Technology Division at Argonne, and assistant professor of molecular engineering at the University of Chicago.

“Research leading to science infrastructure such as the quantum loop will ensure that America remains a world leader in this pivotal, rapidly evolving field which will open up important new avenues of investigation in areas like quantum data transfer and secure communications,” said DOE Under Secretary of Science Paul Dabbar. “We look forward to continued increased support and accomplishment for this and other areas of quantum information science.”

Argonne’s unique suite of world-class facilities, including the Center for Nanoscale Materials and the Advanced Photon Source — both DOE Office of Science User Facilities — as well as the Quantum Factory, enable researchers to build and characterize materials and devices for quantum communication.

In addition to the quantum loop, Argonne plans to develop a two-way quantum link network with Fermi National Accelerator Laboratory. When the two projects are connected, the quantum link, also supported by DOE, is expected to be among the longest links in the world to send secure information using quantum physics.

Argonne is a member of the Chicago Quantum Exchange, a catalyst for advancing academic and industrial efforts in the science and engineering of quantum information. The Chicago Quantum Exchange, directed by Awschalom, is headquartered at the Pritzker School of Molecular Engineering at the University of Chicago and includes Argonne, Fermilab and the University of Illinois at Urbana-Champaign as core members. For more information, visit chicagoquantum.org.

The quantum loop, and the Argonne-Fermi quantum link network, are supported by the DOE Office of Science Basic Energy Sciences program.