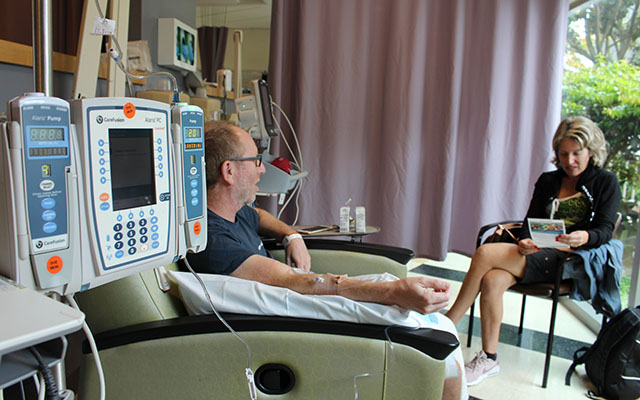 A third occurrence of colon cancer and a failed immunotherapy clinical trial left Gordon Levine confined to a wheelchair with large tumors in his right hip bone, spine and lung, plus smaller tumors throughout his body, including one that caused an obstruction in his colon.

“This time I’m going to die. I’m not going to see my daughter graduate from college,” thought Levine. “The doctors didn’t tell me I had so many months to live …I was not in hospice care, but I’m sure I was inching that way based on the disease progression and how I was feeling.”

For more than four years, Levine had endured numerous invasive surgeries, including removing parts of his colon, peritoneum (the membrane lining the abdominal cavity) and gall bladder. He underwent aggressive therapies, such as heated intraperitoneal chemoperfusion (HIPEC), but the disease steadily progressed, reaching stage four, the most advanced stage.

When his health care team in Montreal suggested his last option was a highly toxic standard chemotherapy, Levine questioned his mortality and then sought a second opinion thousands of miles away, contacting Aaron Miller, MD, PhD, a medical oncologist who specializes in gastrointestinal cancers and novel cancer therapies within the new Precision Immunotherapy Clinic at UC San Diego Health.

“Gordon had exhausted his options in Montreal. He came looking for alternatives and I recommended next-generation sequencing of his cancer,” said Miller. “Reviewing his medical history, I could see that his cancer initially responded to an immunotherapy clinical trial using Keytruda. I saw enough response to tip us toward a treatment approved for people with Lynch syndrome.”

Miller worked with Stephen Schoenberger, PhD, professor of immunology at the La Jolla Institute for Immunology (LJI), to confirm his suspicions by testing Levine’s white blood cells for an immune response against mutations identified during his tumor sequencing.

“While immunotherapy is not approved for Gordon’s molecular tumor profile, we can sometimes use drugs off-label when we have sufficient suspicion that it could work for the patient,” said Miller. “Gordon’s other option was to continue on drugs that were approved for the stage of disease he was in, but response rates are not great. Instead, the treatment we elected to try, based on the makeup of his cancer, resulted in either a very deep response or a complete response. We can no longer detect cancer in him.”

Miller cautions that the off label use is not a proven approach and may not result in a positive response in all patients. With access to experts at the Precision Immunotherapy Clinic, Miller said he hopes more patients will be matched to personalized treatments that provide a meaningful benefit to each individual, whether that means they experience improved quality of life or their cancer goes into remission.

Ezra Cohen, MD, associate director for translational science at Moores Cancer Center, who along with Miller, Gregory Daniels, MD, PhD, and Sandip Patel, MD, make up the Precision Immunotherapy Clinic medical oncology team, said the clinic’s approach was built out of necessity to consolidate offerings to pilot research studies and early-stage Phase I and Phase II clinical trials for people who have not responded to standard cancer treatments.

“The biology of cancer is telling us that a personalized approach is necessary. Inserting a square peg in a round hole will not be successful,” said Cohen. “Every cancer is different at the molecular level. It may look the same under a microscope, but when sequenced you see the difference. Similarly, every person’s immune system is different and responds differently. We need to see what is happening at the molecular and immune level. That’s where we will make the biggest progress.”

Cohen and LJI’s Schoenberger co-lead the San Diego Center for Precision Immunotherapy at Moores Cancer Center with the mission to accelerate and translate scientific advances in immunology to develop treatments that target the uniqueness of each patient with or at risk for cancer. Their efforts have already lead to a pilot study at Moores Cancer Center, the region’s only National Cancer Institute-Designated Comprehensive Cancer Center, testing a personalized vaccine using a patient’s unique cancer mutations to boost an anti-tumor immune response.

These efforts, along with upcoming clinical trials, are being offered at the Precision Immunotherapy Clinic thanks in part to philanthropists Ralph and Fernanda Whitworth and the Immunotherapy Foundation which provided initial funding for Cohen’s and Schoenberger’s research. Ralph Whitworth was a well-known San Diego activist investor who died in 2016 of complications from cancer.

“From my standpoint, what did I have to lose from trying this alternative treatment?” said Levine. “When I started treatment earlier this year, my daughters visited. I was in really bad shape. I’m not sure they thought they’d see me alive again.”

“Now I’m driving to the Grand Canyon and flying in and out of San Diego, which would have been unthinkable six months ago. When I was able to go my daughter’s graduation without a cane, that was a big deal. It has been life-altering in every dimension.”

Levine’s determination and ability to advocate for himself were important to the success of his treatment, said Miller. He looked for other options and found one at the Precision Immunotherapy Clinic, where physician-scientists are willing to think outside the box.

“Treatments like immunotherapy are not without challenges, but when a patient says it is worth it to be able to be experience these life events — like seeing his daughter graduate, driving through Southern California in a convertible, living life and taking his wife on dates again — that sustains you in the field of oncology,” said Miller.

Patients who have not responded to standard therapy and are interested in immunotherapy can contact the Precision Immunotherapy Clinic at 858-246-5300.

Plunging into the Furnace