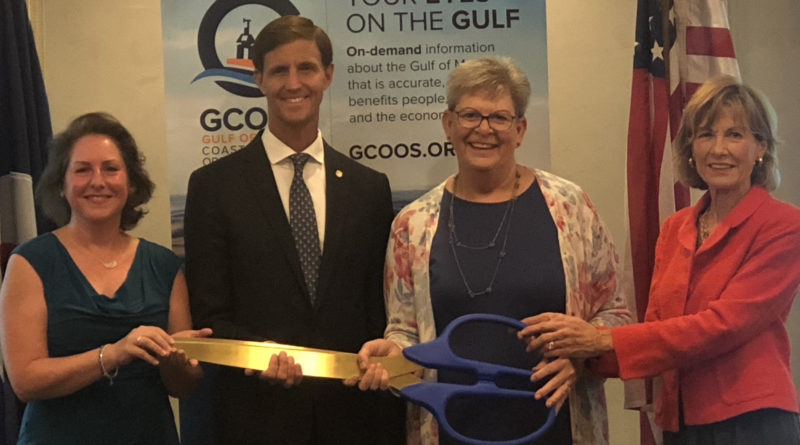 On Tuesday, Aug. 27, the Gulf of Mexico Coastal Ocean Observing System (GCOOS) joined with the National Oceanic and Atmospheric Administration (NOAA), the National Ocean Service (NOS), Fugro and the University of Southern Mississippi to celebrate the installation of two new high-frequency radars situated at the mouth of the Mississippi River.

These high-frequency radars (HFR) measure the speed and direction of ocean surface currents in near-real time — providing accurate and timely information as quickly as possible to people who depend on the data. The information is crucial for those conducting search and rescue operations and tracking contaminants who rely on information about ocean currents to track missing boaters and oil plumes or other spills. It is also crucial for ship navigation, which depends on immediate information about oceans to move large vessels safely in and out of ports and channels.

“The Gulf of Mexico has the highest density of energy activities in the U.S. and its ports are some of the busiest in the world,” said Dr. Barbara Kirkpatrick, Executive Director of GCOOS. “Yet, we have gaps in radar coverage in the Gulf. The funding provided through IOOS that supported the installation of these radars is really going a long way to helping us fill in missing information that is crucial to human safety and our Gulf and national economies.”

The radars were installed in Port Fourchon, on land owned by Chevron Pipeline Co., and in Southwest Pass at the Pilot Station and will be operated by a partnership between private industry and academia — Fugro and the University of Southern Mississippi.

The installation of the HFRs was funded through a competitive selection process by GCOOS, supported by a grant from the U.S. Integrated Ocean Observing System (IOOS). The radars are the first new ocean-observing assets federally funded in the Gulf of Mexico through GCOOS in the last five years.

“The last half of the 20thCentury was the Space Age; I’ll wager that this first half of the 21stCentury is the Ocean Age,” said Rear Admiral (Ret.) Tim Galluadet, Assistant Secretary of Commerce for Oceans and Atmosphere for NOAA. “If you look at the last 2½ decades, ocean activity has increased 400 percent. Nearly 40 percent of the population is along the U.S. coast and the Great Lakes. And if you look just at the Gulf Coast — since 2010, the population increase has been more than 24 percent — nearly double the rest of the country. This is the Ocean Age and to empower it, we need data and ocean observations, and this is what GCOOS is doing in the Gulf.

“Ocean observations are critical to powering the blue economy and to keeping us safe and secure,” Galluadet said.

“Bringing local partners together and leveraging expertise and services is a key niche that the IOOS regional associations like GCOOS fill,” said Nicole LeBoeuf, Acting Assistant Administrator for NOS. “These two high frequency radars are a testament to how IOOS — and GCOOS — can best meet stakeholder needs.”

Ed Saade, President of Fugro USA, said the project was an excellent example of a public-private partnership — something that Fugro tries to promote whenever possible. “We’re glad to be a part of this partnership.”

Dr. Stephan D. Howden, Associate Professor in the Department of Marine Science at the University of Southern Mississippi, said that the installation and new partnership with Fugro would benefit the Gulf of Mexico for years to come. “The data we’re collecting will help support everything from search and rescue, to the navigation of large container ships and even cruise lines. It’s also great that we can involve students in these projects so we’re continuing to develop new generations of ocean-focused professionals.”