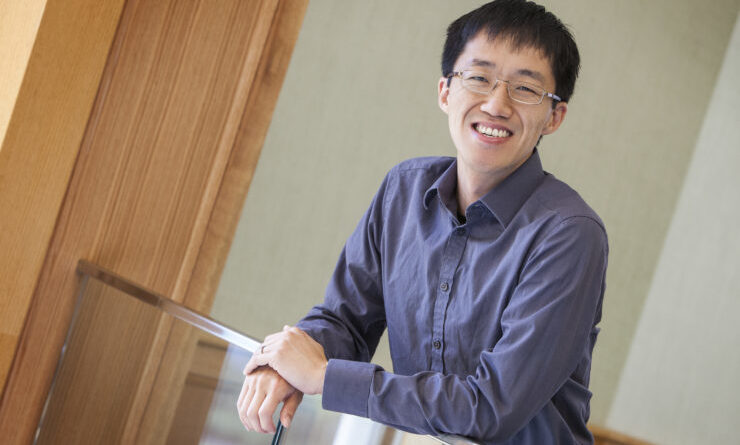 Answers to big questions increasingly require access to the realm of the very small.

As researchers continue to push the limits of imaging, a scientist at Washington University in St. Louis has uncovered a fundamental barrier to accuracy when it comes to measuring the rotational motion of molecules.

Matthew Lew, professor of electrical & systems engineering at the McKelvey School of Engineering, likens the consequence of this barrier to something many are familiar with.

“When you look at your sideview mirror in the car, there is a disclaimer: objects are closer than they appear,” said Lew, whose research was published in the Physical Review Letters, the flagship publication of the American Physical Society.

“We have found that objects in the microscope are less confined than they appear. Fluorescent molecules always appear to be more confined in rotational freedom than they actually are,” Lew said.

This discrepancy is a result of measurement noise.

This is important because molecules are not smooth, round balls moving along straight paths, bumping into each other and sticking together — they have a topography of sorts. This is critical to chemical and biological reactions: “There needs to be the right matching of pockets and binding motifs,” Lew said. The puzzle pieces, that is, need to match and connect in order for reactions to occur.

In addition to moving in three dimensions, molecules also rotate, like a ball rolling down an uneven surface they wobble, twist, and spin in all directions. Researchers need to see both the straight, translational movement and the spinning, rotational movement to understand how molecules interact.

Imaging research matters in the the fight against many diseases. In amyloid disease, such as Alzheimer’s, for example, certain proteins like amyloid beta and tau will clump and cause tangles in the brain. Before that happens, before there are any symptoms, individual copies of these proteins are moving around in the cell.

“We don’t know what they do,” said Matthew Lew, professor of electrical & systems engineering at the McKelvey School of Engineering. “Occasionally they will assume some kind of shape that causes them to aggregate,” those aggregations may signal the earliest stages of the disease.

“We’d like to understand what causes those individual proteins to change from just flopping around, not causing any ill effects, into a conformation that ushers in the first stage of disease progression.”

In order to see anything, however, an imaging device needs to capture light emitted from the fluorescing object. In the case of these tiny bits of matter, that may mean a relatively small number of photons.

The limit Lew has discovered deals with light: If the object being imaged is too dim, it will appear rotationally constrained and look like it has less rotational movement than it actually does. Like a spinning fan, a rotating molecule should look smooth — like the blurred blades. But if that fan is dimly lit, the blades won’t look perfectly smooth and will instead appear to be “stuttering.” Therefore, they appear to be rotating less than they actually are. (The underlying physics of the fan analogy is different than that of imaging molecules, however).

That noise is a result of light. Imaging something as small as a molecule deals with a small number of photons. Taking photographs of these photons, an exquisitely small amount of light, falls within the realm of the quantum world. Such a photograph can never be perfectly smooth, since it is made up of a finite number of photons. Taking a photo with only a few photons produces a fuzzy or noisy picture — like taking a photograph at night.

Trying to capture the rotational motion underneath that noise is akin to flashing a strobe light in front of a moving fan — the resulting picture misses some of the movement, making it seem as if the molecule more restrained than it actually is:

Often, scientists will average multiple images to reduce the effect of noise, but in this case, averaging noisy images won’t produce an accurate result. “This is a fundamental physics problem,” Lew said.

His research has worked out the lower bound — the dimmest a molecule can be — after which it is fundamentally impossible to determine whether an object that looks as if it is partially fixed in place really is, or if it’s actually rotating freely but being disturbed by noise.

In addition, the research showed that scientists need to choose carefully between using methods that measure 2D rotation versus 3D rotation, as these technologies actually perceive the same rotational motion differently, possibly leading to different interpretations.

Regardless of the imaging technique, however, the uncertainty caused by noise remains.

The research is not entirely about uncertainty. “We can use simulations to model these limits and figure out what their effects are in our imaging of single molecules,” Lew said, “and incorporate this knowledge into image processing algorithms.”