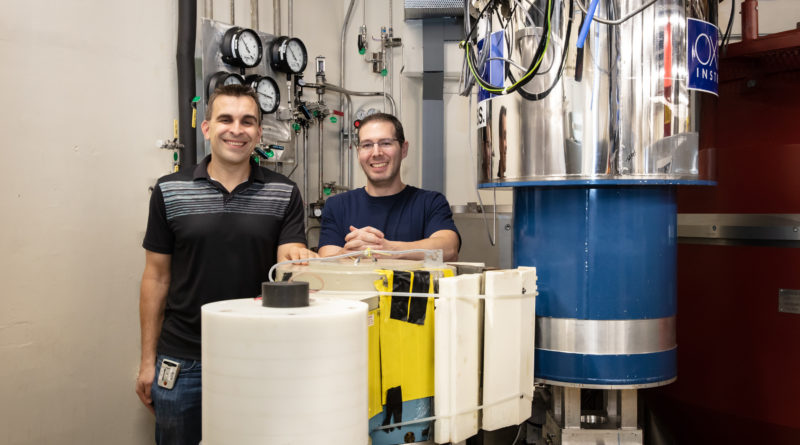 Bose-Einstein condensates are macroscopic quantum phases of matter which appear only under very particular conditions. Learning more about these phases of matter could help researchers develop a better understanding of fundamental quantum behaviors and possibly contribute to future quantum technology.

That’s why Kate Ross and PhD candidate Gavin Hester, researchers from Colorado State University, are at the Department of Energy’s (DOE’s) Oak Ridge National Laboratory (ORNL) to probe a material called ytterbium silicate. Ross believes ytterbium silicate, the only magnetic material based on a rare-earth element that shows evidence of a Bose-Einstein condensate, may hold the key to understanding quantum phenomena in other magnets based on rare-earth elements. By probing samples of ytterbium silicate with neutrons, Ross hopes to generate a detailed map of this unique Bose-Einstein condensate and then use that map to validate her hypothesis by identifying exotic quantum states in other magnetic materials. Ross and her collaborators discuss their findings in their paper published in the journal Physical Review Letters.

“If we can get a better understanding of the Bose-Einstein condensate we see in this material, then we could potentially use that knowledge to discover similar many-body quantum states in other magnetic materials based on rare-earth elements,” said Ross.

Ross explains that the Bose-Einstein condensate, also known as a BEC phase, is a quantum fluid in which particles stop behaving like individual entities and instead behave like waves moving in sync with one another across the fabric of a single, unified system. It’s unlike any solid, liquid, gas, or plasma and appears only at temperatures close to absolute zero, or 0 K (about -460°F). Scientists still have much to learn about this unique state of matter, but there is hope that its unique properties may one day contribute to advanced materials.

“There is no direct link between Bose-Einstein condensates and current proposals for quantum technology. But we also have a lot to learn about how this material behaves, and answering some of these fundamental questions about quantum phenomena will be the foundation for future scientific achievement,” said Hester.

For starters, it’s long been assumed that Bose-Einstein condensates can’t appear in magnetic materials based on rare-earth elements because those particular magnetic interactions didn’t seem to be isotropic enough for a BEC phase to appear. But, having observed evidence of a BEC phase in ytterbium silicate during past experiments, Ross and her team suspect this assumption could be false.

“We were really surprised when we saw the evidence for a BEC phase. It suggests that ytterbium is a much more versatile ingredient for forming many-body quantum states than we previously thought,” said Ross.

These experiments have been in the works for nearly 4 years. Ross’ research group first started growing samples of ytterbium silicate and mapping out the behavior of this material back in 2015. With their collaborators, they used various probes at Colorado State University and Sherbrooke University in Canada to get a first look at the material’s behavior, but they were eager to use neutron scattering to probe their samples.

“Neutrons are deeply penetrating, and as they pass through our samples they stir up these emergent quantum particles in such a way that we can accurately gauge exactly how those particles behave within ytterbium silicate’s microstructure,” said Hester.

To prepare their samples for neutron scattering, Ross and her collaborators had to cut and align every individual crystal so that each was oriented in the same direction. Furthermore, Ross had to both expose her ytterbium silicate samples to a magnetic field and use a special cooling chamber to bring them down to a chilly -459.28°F, which is colder than interstellar space and very close to absolute zero.

“Putting this experiment together took a lot of work, but the data we got was definitely worth the effort,” said Ross.

Ross and Hester hope that their work will not only shed light on how ytterbium silicate’s BEC phase is unique, but also give researchers a better understanding of quantum phenomena generally as they appear in other magnetic materials based on rare-earth elements.

“We’re definitely interested in learning more about this BEC phase in ytterbium silicate specifically, but we hope that what we learn here will also help our colleagues discover more quantum states in rare-earth–based materials. This fundamental understanding is essential for forming the material platforms of future quantum technologies,” said Ross.