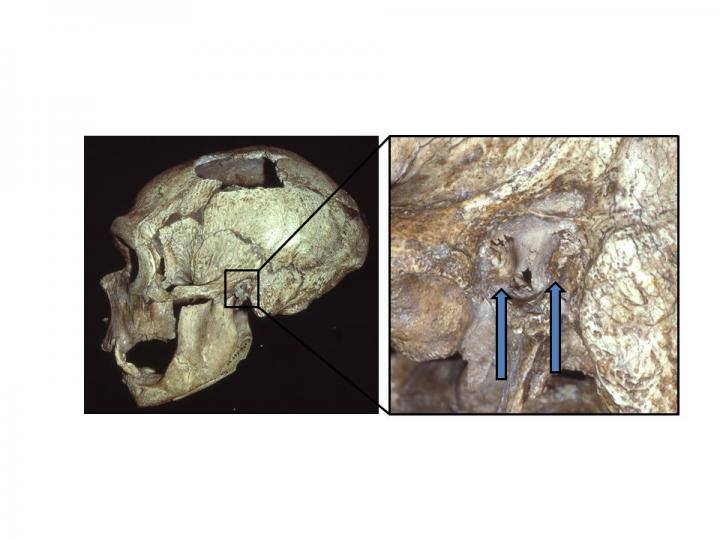 Abnormal bony growths in the ear canal were surprisingly common in Neanderthals, according to a study published August 14, 2019 in the open-access journal

by Erik Trinkaus of Washington University and colleagues.

External auditory exostoses are dense bony growths that protrude into the ear canal. In modern humans, this condition is commonly called “swimmer’s ear” and is known to be correlated with habitual exposure to cold water or chilly air, though there is also a potential genetic predisposition for the condition. Such exostoses have been noted in ancient humans, but little research has examined how the condition might inform our understanding of past human lifestyles.

In this study, Trinkaus and colleagues examined well-preserved ear canals in the remains of 77 ancient humans, including Neanderthals and early modern humans from the Middle to Late Pleistocene Epoch of western Eurasia. While the early modern human samples exhibited similar frequencies of exostoses to modern human samples, the condition was exceptionally common in Neanderthals. Approximately half of the 23 Neanderthal remains examined exhibited mild to severe exostoses, at least twice the frequency seen in almost any other population studied.

The authors suggest that the most likely explanation for this pattern is that these Neanderthals spent a significant amount of time collecting resources in aquatic settings. However, the geographic distribution of exostoses seen in Neanderthals does not exhibit a definitive correlation with proximity to ancient water sources nor to cooler climates as would be expected. The authors propose that multiple factors were probably involved in this high abundance of exostoses, probably including environmental factors as well as genetic predispositions.

Trinkaus adds: “An exceptionally high frequency of external auditory exostoses (bony growths in the ear canal; “swimmer’s ear”) among the Neandertals, and a more modest level among high latitude earlier Upper Paleolithic modern humans, indicate a higher frequency of aquatic resource exploitation among both groups of humans than is suggested by the archeological record. In particular, it reinforces the foraging abilities and resource diversity of the Neandertals.”

Portions of the data collection have been funded by the Université de Bordeaux, Washington University in Saint Louis, and the Agence Nationale de la Recherche (grant number ANR-15-CE33-0004). The funders have no role in study design, data collection and analysis, decision to publish, or preparation of the manuscript.

The authors have declared that no competing interests exist.