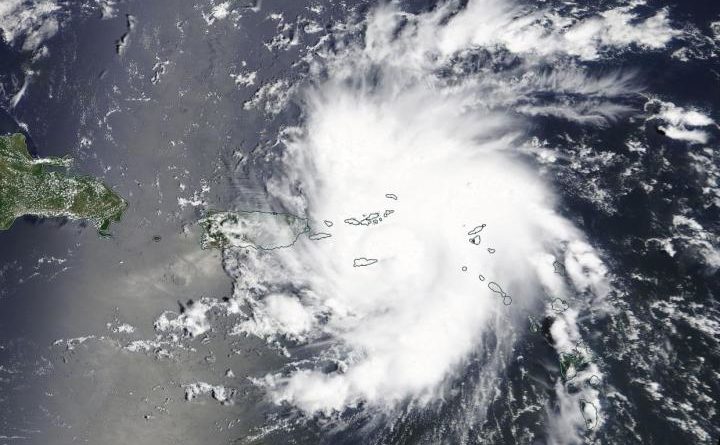 NASA’s Terra satellite passed over the northwestern Atlantic Ocean as Dorian reached hurricane status during the afternoon of August 28, 2019.

On Aug. 28, 2019 at 1:30 p.m. EDT, the Moderate Resolution Imaging Spectroradiometer or MODIS instrument aboard NASA’s Terra satellite provided a visible image of Dorian near St. Thomas and the U.S. Virgin Islands. At 2 p.m. EDT, the National Hurricane Center noted, “Satellite and radar images indicate that the cloud pattern has become better organized during the past several hours.”

Dorian strengthened over the warm waters of the eastern Caribbean Sea and was officially designated a Category 1 hurricane on the Saffir-Simpson Hurricane Wind Scale at 2 p.m. EDT.

NOAA’s National Hurricane Center or NHC said that at 2 p.m. EDT (1800 UTC), the center of Hurricane Dorian was located near latitude 18.3 degrees north and longitude 65.0 degrees west. That puts Dorian directly over the island of St. Thomas.

Dorian is moving toward the northwest near 13 mph (20 kph), and this motion is expected to continue for the next day or two. Maximum sustained winds have increased to near 75 mph (120 kph) with higher gusts. Hurricane-force winds extend outward up to 20 miles (30 km) to the north and east of the center. Tropical-storm-force winds extend outward up to 80 miles (130 km) primarily to the east of the center. An elevated weather station on Buck Island just south of St. Thomas reported a sustained wind of 82 mph (132 kph) and a gust of 111 mph (178 kph). The estimated minimum central pressure from nearby observations is 997 millibars.

On this track, Dorian should continue to move near or over the U.S. and British Virgin Islands this afternoon and then move over the open Atlantic well east of the southeastern Bahamas. Dorian is forecast to continue strengthening during the next few days over the Atlantic waters.

This part of information is sourced from https://www.eurekalert.org/pub_releases/2019-08/nsfc-nsd082819.php