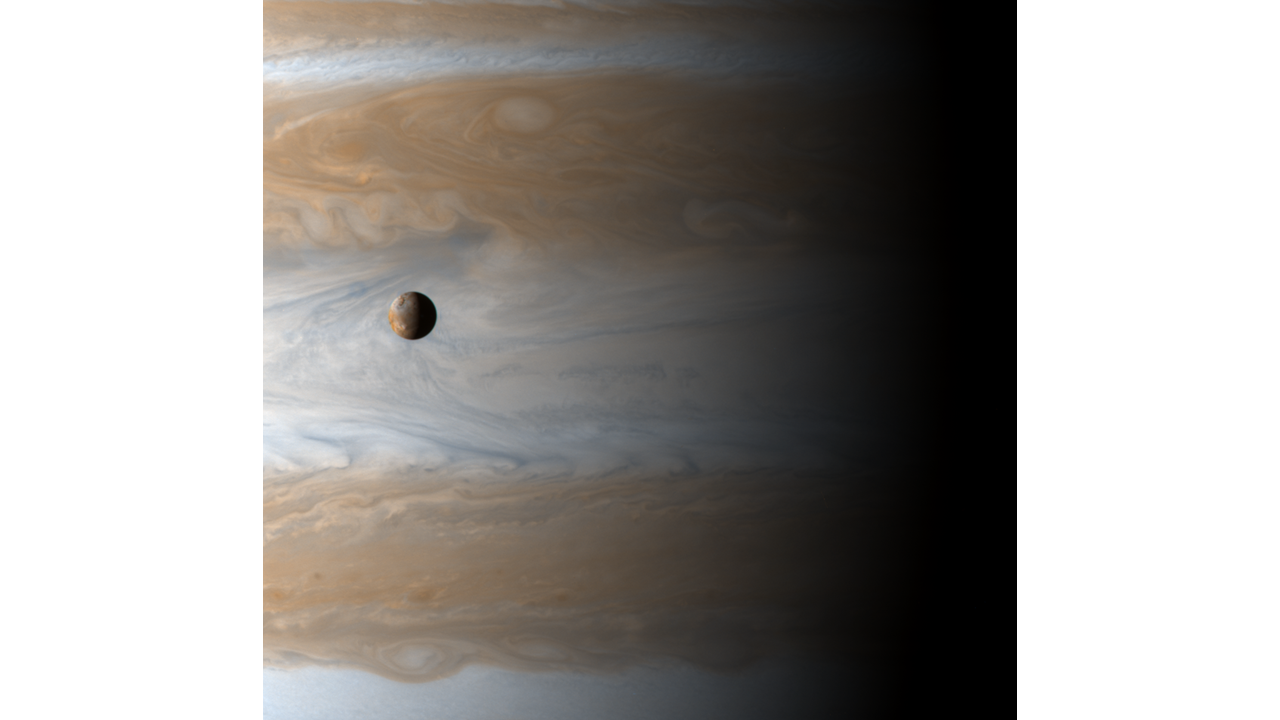 Jupiter, named for the king of the ancient Roman gods, commands its own mini-version of our solar system of circling satellites; their movements convinced Galileo Galilei that Earth is not the center of the universe in the early 17th century. More than 400 years later, astronomers will use NASA’s James Webb Space Telescope to observe these famous subjects, pushing the observatory’s instruments to their fullest capabilities and laying the groundwork for far-reaching scientific discovery.

A diverse team of more than 40 researchers, led by astronomers Imke de Pater of the University of California, Berkeley and Thierry Fouchet of the Observatoire de Paris, have designed an ambitious observing program that will conduct some of Webb’s first scientific observations in the solar system—studying Jupiter, its ring system, and two of its moons: Ganymede and Io.

“It will be a really challenging experiment,” said de Pater. “Jupiter is so bright, and Webb’s instruments are so sensitive, that observing both the bright planet and its fainter rings and moons will be an excellent test of how to get the most out of Webb’s innovative technology.”

In addition to calibrating Webb’s instruments for Jupiter’s brightness, astronomers must also take into account the planet’s rotation, because Jupiter completes one day in only 10 hours. Several images must be stitched together in a mosaic to fully capture a certain area—the famous storm known as the Great Red Spot, for example—a task made more difficult when the object itself is moving. While many telescopes have studied Jupiter and its storms, Webb’s large mirror and powerful instruments will provide new insights.

“We know that the immediate atmosphere above the Great Red Spot is colder than other areas of Jupiter, but at higher altitudes, in the mesosphere, the atmosphere appears to be warmer. We will use Webb to investigate this phenomenon,” de Pater said.

Webb will also examine the atmosphere of the polar region, where NASA’s Juno spacecraft discovered clusters of cyclones. Webb’s spectroscopic data will provide much more detail than has been possible in past observations, measuring winds, cloud particles, gas composition, and temperature.

All four of the gas giant planets of the solar system have rings, with Saturn’s being the most prominent. Jupiter’s ring system is composed of three parts: a flat main ring; a halo inside the main ring, shaped like a double-convex lens; and the gossamer ring, exterior to the main ring. Jupiter’s ring system is exceptionally faint because the particles that make up the rings are so small and sparse that they do not reflect much light. Next to the brightness of the planet they practically disappear, presenting a challenge for astronomers.

“We are really pushing the capabilities of some of Webb’s instruments to the limit to get a unique new set of observations,” said co-investigator Michael Wong of the University of California, Berkeley. The team will test observing strategies to deal with Jupiter’s scattered light, and build models for use by other astronomers, including those studying exoplanets orbiting bright stars.

The team will look to make new discoveries in the rings as well. De Pater noted that there may be undiscovered “ephemeral moonlets” in the dynamic ring system, and potential ripples in the ring from comet impacts, like those observed and traced back to the impact of Comet Shoemaker-Levy 9 in 1994.

Several features of icy Ganymede make it fascinating for astronomers. Aside from being the largest moon in the solar system, and larger even than the planet Mercury, it is the only moon known to have its own magnetic field. The team will investigate the very outer parts of Ganymede’s atmosphere, its exosphere, to better understand the moon’s interaction with particles in Jupiter’s magnetic field.

There is also evidence that Ganymede may have a liquid saltwater ocean beneath its thick surface ice, which Webb will investigate with detailed spectroscopic study of surface salts and other compounds. The team’s experience studying Ganymede’s surface may be useful in the future study of other icy solar system moons suspected of having subsurface oceans, including Saturn’s moon Enceladus and fellow Jovian satellite Europa.

In dramatic contrast to Ganymede is the other moon the team will study, Io, the most volcanically active world in the solar system. The dynamic surface is covered with hundreds of huge volcanoes that would dwarf those on Earth, as well as lakes of molten lava and smooth floodplains of solidified lava. Astronomers plan to use Webb to learn more about the effects of Io’s volcanos on its atmosphere.

“There is still much we don’t know about Io’s atmospheric temperature structure, because we haven’t had the data to distinguish the temperature at different altitudes,” said de Pater. “On Earth we take for granted that as you hike up a mountain, the air gets cooler—would it be the same on Io? Right now we don’t know, but Webb may help us to find out.”

Another mystery Webb will investigate on Io is the existence of “stealth volcanoes,” which emit plumes of gas without the light-reflecting dust that can be detected by spacecraft like NASA’s Voyager and Galileo missions, and so have thus far gone undetected. Webb’s high spatial resolution will be able to isolate individual volcanoes that previously would have appeared as one large hotspot, allowing astronomers to gather detailed data on Io’s geology.

Webb will also provide unprecedented data on the temperature of Io’s hotspots, and determine if they are closer to volcanism on Earth today, or if they have a much higher temperature, similar to the environment on Earth in the early years after its formation. Previous observations by the Galileo mission and ground observatories have hinted at these high temperatures; Webb will follow up on that research and provide new evidence that may settle the question.

Webb’s detailed observations will not supplant those of other observatories, but rather coordinate with them, Wong explained. “Webb’s spectroscopic observations will cover just a small area of the planet, so global views from ground-based observatories can show how the detailed Webb data fit in with what’s happening on a larger scale, similar to how Hubble and the Gemini Observatory provide context for Juno’s narrow, close-up observations.”

In turn, Webb’s study of Jupiter’s storms and atmosphere will complement Juno data, including radio signals from lightning, which Webb does not detect. “No one observatory or spacecraft can do it all,” Wong said, “so we are very excited about combining data from multiple observatories to tell us much more than we could learn from only a single source.”

This research is being conducted as part of a Webb Early Release Science (ERS) program. This program provides time to selected projects early in the observatory’s mission, allowing researchers to quickly learn how best to use Webb’s capabilities, while also yielding robust science.

The James Webb Space Telescope will be the world’s premier space science observatory when it launches in 2021. Webb will solve mysteries in our solar system, look beyond to distant worlds around other stars, and probe the mysterious structures and origins of our universe and our place in it. Webb is an international program led by NASA with its partners, ESA (European Space Agency) and the Canadian Space Agency.