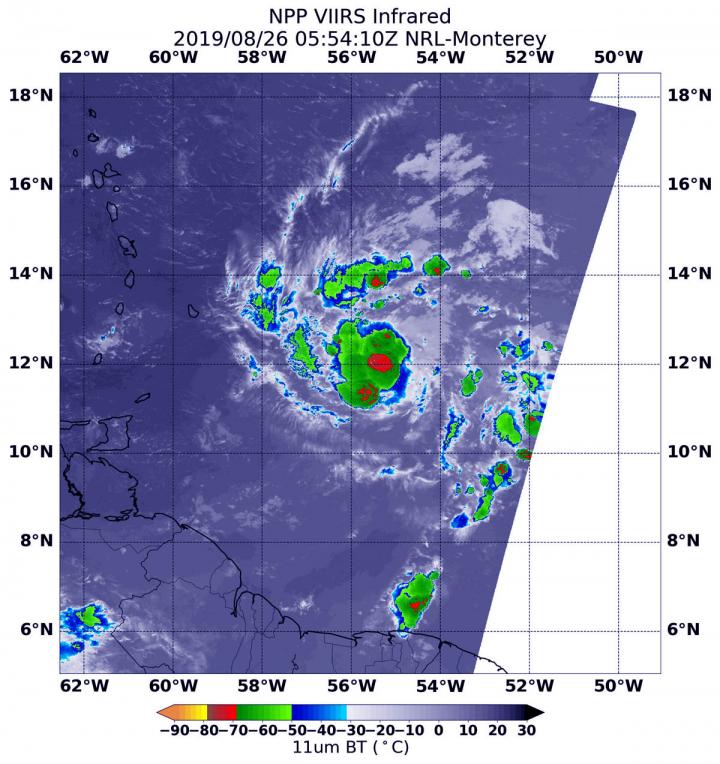 NASA-NOAA’s Suomi NPP satellite passed over Tropical Storm Dorian as it triggered warnings and watches for the  islands of the Eastern Caribbean Sea.

Dorian formed as a tropical depression on Saturday, Aug. 24 about 805 miles (1,300 km) east-southeast of Barbados. By 5 p.m. EDT that day, the depression strengthened into a tropical storm and was named Dorian.

NASA-NOAA’s Suomi NPP satellite passed over Tropical Storm Dorian in the western North Atlantic Ocean on Aug. 26 at 1:54 a.m. EDT (0554 UTC). The Visible Infrared Imaging Radiometer Suite (VIIRS) instrument aboard Suomi NPP provided an infrared image of the storm. Infrared imagery reveals cloud top temperatures, and the higher the cloud top, the colder it is, and the stronger the storm. Coldest cloud top temperatures were as cold as minus 70 degrees Fahrenheit (minus 56.6 Celsius) and found around the center of circulation, southwest of the center and in fragmented bands of thunderstorms north of the center. Storms with cloud tops that cold have been found to generate heavy rainfall.

Dorian is a small tropical cyclone. Tropical-storm-force winds only extend outward up to 45 miles (75 km) from the center.

Those areas of strong storms with heavy rainfall potential play into the forecast. NOAA’s National Hurricane Center or NHC said that Dorian is expected to produce total rain accumulations of 3 to 8 inches in the Windward Islands from Martinique south to St. Vincent, including Barbados.  Isolated maximum totals of 10 inches are possible across the northern Windward Islands.  Rainfall totals of 1 to 3 inches are expected from the Grenadines, south to Grenada and across Dominica.

Satellite microwave imagery has shown a persistent low-level eye-like feature along with an intermittent mid-level eyewall forming that quickly erodes because of dry air entering the storm in the mid-levels of the atmosphere.

At 11 a.m. EDT (1500 UTC) on Monday, August 26, the center of Tropical Storm Dorian was located near latitude 12.3 degrees north and longitude 57.7 degrees west. The center of Dorian was about 135 miles (220 km) east-southeast of Barbados. The estimated minimum central pressure is 1002 millibars.

Dorian is moving toward the west-northwest near 14 mph (22 kph) and this motion is expected to continue through Tuesday night [Aug. 27], followed by a turn toward the northwest on Wednesday [Aug. 28]. Maximum sustained winds are near 60 mph (95 kph) with higher gusts.

Some strengthening is forecast during the next few days, and Dorian could be near hurricane strength when it passes through the northern Windward Islands on Tuesday, and is expected to be a hurricane when it moves near Puerto Rico and eastern Hispaniola.

This part of information is sourced from https://www.eurekalert.org/pub_releases/2019-08/nsfc-nsf082619.php