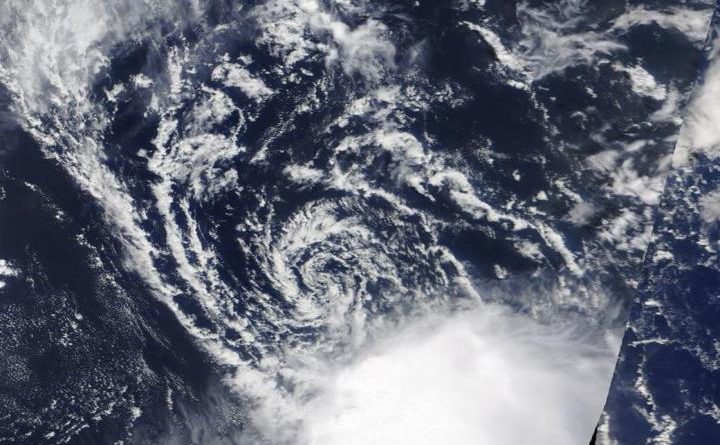 On Aug. 27, the Moderate Resolution Imaging Spectroradiometer or MODIS instrument aboard NASA’s Terra satellite provided a visible image of Tropical Depression Erin. In the image, Erin appeared as a swirl of clouds around its center with most of its clouds and thunderstorms pushed southeast of center. Strong northwesterly vertical wind shear was pushing at the storm.

Despite fighting wind shear on Aug. 27, Tropical Depression 6 strengthened into a tropical storm by 11 p.m. EDT, and was renamed Erin.

Infrared imagery from NASA’s Aqua satellite confirmed that wind shear was still affecting Tropical Storm Erin on Wednesday, August 28 at 3:25 a.m. EDT (0725 UTC). Infrared imagery reveals temperature data, and showed the only strong storms in the tropical storm were being pushed to the southeast. Strongest storms were as cold as minus 70 degrees Fahrenheit (minus 56.6 degrees Celsius).

In general, wind shear is a measure of how the speed and direction of winds change with altitude. Tropical cyclones are like rotating cylinders of winds. Each level needs to be stacked on top each other vertically in order for the storm to maintain strength or intensify. Wind shear occurs when winds at different levels of the atmosphere push against the rotating cylinder of winds, weakening the rotation by pushing it apart at different levels.

By 11 a.m. EDT (1500 UTC), Tropical Storm Erin had weakened back to a depression. At that time, the center of Tropical Depression Erin was located near latitude 33.6 degrees north and longitude 72.8 degrees west. That places the center of Erin about 190 miles (305 km) southeast of Cape Hatteras, North Carolina. The bulk of clouds and precipitation, however, are south of the center. However, because Erin is so far from the coast, there are no coastal watches or warnings in effect.

The depression is moving toward the north-northwest near 13 mph (20 kph). Maximum sustained winds are near 35 mph (55 km/h) with higher gusts. The estimated minimum central pressure is 1006 millibars.

The cyclone is expected to turn northward later today and then north-northeastward early Thursday morning with an increase in forward speed.

NHC forecaster Daniel Brown noted in the Aug. 28 discussion, “The northwesterly shear that has been affecting Erin is forecast to decrease somewhat later today and tonight, but given the current structure of the system, little overall change in intensity is anticipated during that time. If convection does not re-develop closer to the center later today, Erin could become post-tropical.”

This part of information is sourced from https://www.eurekalert.org/pub_releases/2019-08/nsfc-nfw082819.php