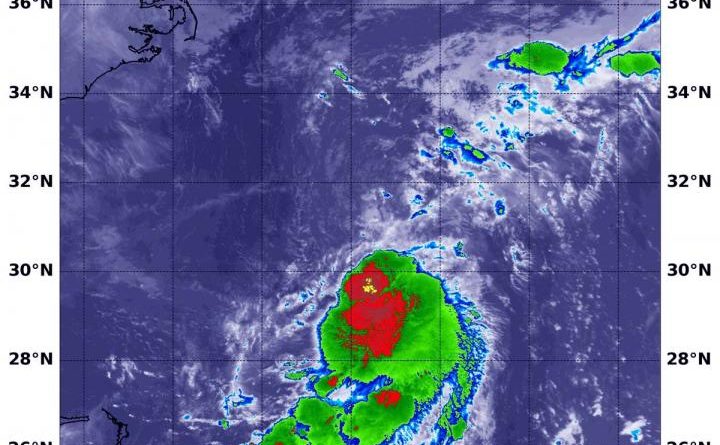 Newly formed Tropical Depression 6 in the Atlantic Ocean may have just formed, but it did so under adverse atmospheric conditions. The depression is battling wind shear and it’s apparent on imagery from NASA’s Aqua satellite.

Wind shear is a measure of how the speed and direction of winds change with altitude. When outside winds batter a tropical cyclone, it affects its circulation. A less circular storm tends to slow down in its spin and weaken.

Tropical Depression 6 or TD6 formed around 5 p.m. EDT on August 26 and has since been moving slowly while remaining a few hundred miles off the coast of the Carolinas.

On August 27 at 2:40 a.m. EDT (0640 UTC), the Moderate Imaging Spectroradiometer or MODIS instrument that flies aboard NASA’s Aqua satellite used infrared light to analyze the strength of storms within the depression. Tropical cyclones are made of up hundreds of thunderstorms, and infrared data can show where the strongest storms are located. They can do that because infrared data provides temperature information, and the strongest thunderstorms that reach highest into the atmosphere have the coldest cloud top temperatures.

MODIS found those strongest storms had cloud top temperatures as cold as minus 80 degrees Fahrenheit (minus 62.2 Celsius). NASA research has found that cloud top temperatures that cold indicate strong storms with the potential to generate heavy rainfall. Those strongest storms were in a small area around the center of circulation. Less strong storms were pushed to the south by northerly wind shear.

The NHC or National Hurricane Center noted in their Discussion on Aug. 27 at 11 a.m. EDT “The depression, however, continues to be sheared with the low-level center to the north of the convection. The northwesterly shear currently affecting the depression is expected to continue, and only a small increase in intensity is anticipated in the next couple of days.”

The depression has been drifting northward near 2 mph (4 kph), and little motion is anticipated today. Maximum sustained winds are near 35 mph (55 km/h) with higher gusts. Some strengthening is expected, and the cyclone is forecast to become a tropical storm later tonight or on Wednesday.

NHC forecasters expect TD6 should begin to move generally northward and then northeastward on Wednesday over the open Atlantic.

This part of information is sourced from https://www.eurekalert.org/pub_releases/2019-08/nsfc-nft082719.php