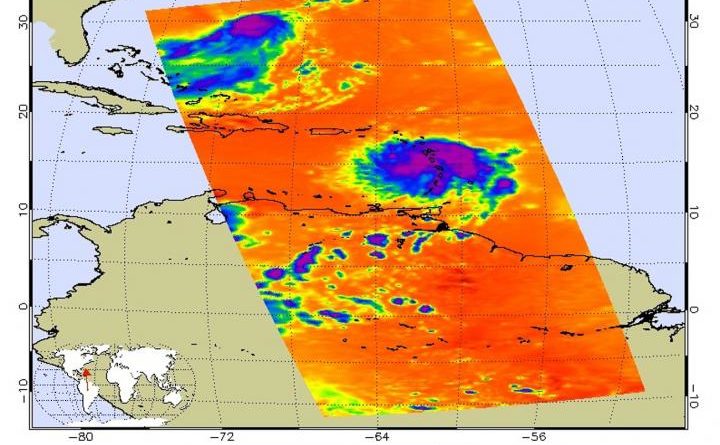 NASA’s Aqua satellite provided forecasters at the National Hurricane Center with visible imagery and infrared data on Tropical Storm Dorian as it continued its western track into the Eastern Caribbean Sea. Infrared data provided an indication of the storm’s heavy rain making potential.

Cloud top temperatures provide information to forecasters about where the strongest storms are located within a tropical cyclone. The stronger the storms, the higher they extend into the troposphere, and the colder the cloud top temperatures. NASA’s Aqua satellite analyzed Tropical Storm Dorian’s cloud tops to get that information. AIRS found that some areas in Dorian were being affected by dry air, which was sapping the development of thunderstorms.

NASA’s Aqua satellite analyzed the storm on Aug. 27 at 1:35 p.m. EDT (1735 UTC) using the Atmospheric Infrared Sounder or AIRS instrument. AIRS found coldest cloud top temperatures as cold as or colder than minus 63 degrees Fahrenheit (minus 53 degrees Celsius) around the center and in a thick band of thunderstorms east of the center. NASA research has indicated that cloud top temperatures that cold indicate strong storms that have the capability to create heavy rain.

NHC forecasters said that Dorian is expected to produce the following rainfall accumulations:

This rainfall may cause life-threatening flash floods.

Dorian is moving toward the northwest near 13 mph (20 kph), and this general motion is expected to continue during the next few days. Maximum sustained winds are near 60 mph (95 kph) with higher gusts. Tropical-storm-force winds extend outward up to 60 miles (95 km) from the center. NHC forecasters said some strengthening is expected today, and Dorian is forecast to be near hurricane strength when it approaches the Virgin Islands and Puerto Rico. An Air Force reconnaissance plane just reported an estimated minimum central pressure of 1003 millibars.

This part of information is sourced from https://www.eurekalert.org/pub_releases/2019-08/nsfc-nfh082819.php