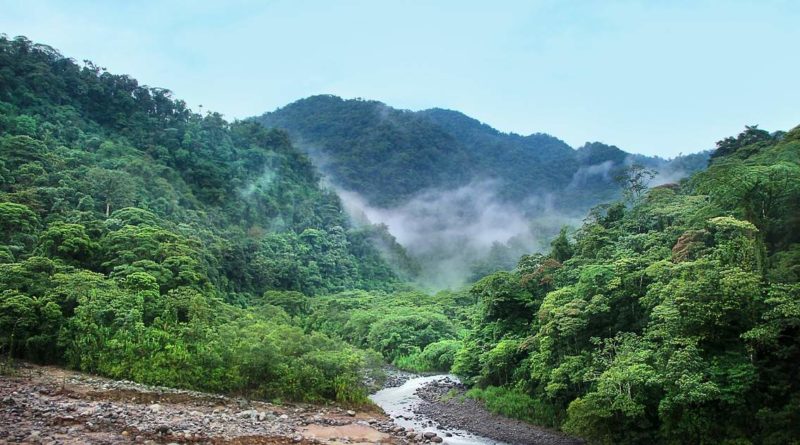 Drug trafficking and, paradoxically, efforts to slow it are rapidly driving the deforestation in Central America’s most vulnerable tropical rainforests, new research conducted in part by Texas State University reveals.

The research was release in three major studies Oct. 8 at the Pre-COP, an event sponsored by the Government of Costa Rica in the lead up to the Conference of the Parties to the Framework Convention on Climate Change (COP25) in Chile in December.

The studies by researchers in Texas, Oregon, El Salvador and Costa Rica find the U.S.-funded war on drugs has pushed traffickers into remote forest areas, where the shadowy underground economy they have built is devasting the environment, directly causing more than $214.6 million in natural and cultural resource loss in the region’s protected forests each year.

“Narco-deforestation now affects large tropical forests in Guatemala, Honduras, Nicaragua, and is beginning to affect Costa Rica as well,” said Jennifer A. Devine, an assistant professor of geography at Texas State and co-author of two of the studies released Oct. 8 on cocaine trafficking in Central America. “Our findings suggest the best way to address drug-fueled deforestation, violence and insecurity in the region is to invest in community land management and to recognize community land rights. Doing this will also help to save the region´s remaining forests and address climate threats. But we have to move quickly.”

A third study, by the El Salvador-based Prisma Foundation, also released Oct. 8 at the Pre-COP, reveals that community forests in southern Mexico and Central America contain enough carbon to more than meet the region’s commitments to the Paris Agreement on climate—if governments recognize and enforce the rights of local and indigenous communities and allow them to participate in decisions that impact land and resource management.

“Taken together, these papers confirm just how vital it is to ensure that local forest communities have long-term control over their land and forest resources,” said David Wrathall, assistant professor of geography, environmental sciences and marine resource management at Oregon State University. “If we are to reduce the risk of emissions caused when forests are destroyed and to safeguard the carbon in forests, such rights will be key for avoid dangerous human interference in the atmosphere.”

The paper on cocaine trafficking and conservation efforts in Central America concludes that drug traffickers increasingly are seeking remote landscapes, often in protected areas, to ensure physical transit routes for cocaine. But the local impact goes far beyond mere trafficking and leads to the undermining of systems of governance, except where indigenous and traditional peoples have strong rights and a role in deciding how the land should be managed.

Supported with grants from the Pegasus program at Colorado State University, the National Socio-Environmental Synthesis Center (funded by the National Science Foundation) and the Open Society Foundations, the two studies of cocaine trafficking were produced by researchers at Texas State, Oregon State and Fundación Neotrópica in Costa Rica, with contributions from researchers at other U.S. institutions.

In looking at the impacts of drug trafficking, the researchers sought to identify the causes of deforestation in protected areas across the Mesoamerican Biological Corridor, with a particular focus on the Mosquitia in Honduras, the Osa Conservation region in Costa Rica and the Maya Biosphere Reserve in Guatemala.

One of their conclusions is that funds provided by the United States for militarized counter-drug policies, “have ultimately pushed drug trafficking and the laundering of spectacular profits into remote, biodiverse spaces, where they threaten both ecosystems and people, and undermine conservation goals and local livelihoods.”

“In this way, the War on Drugs is working directly at odds against the billions of dollars invested in conservation by donor countries, international conservation NGOs, advocacy groups, and local communities,” Wrathall said.

The researchers found that the multinational drug trafficking organizations, driven into remote forest areas to elude law enforcement, have cleared vast areas of trees in Central America to launder their drug money. By striking deals with cattle, logging and fishing interests, the narco-traffickers cause the destruction of forests that have stood for centuries. Representatives of large transnational cartels partner with cattle ranchers, for example, with Mexican cartels in particular able to leverage their local influence to embed themselves in the landscape, acquiring territory and fomenting violence.

“We now know that narco-trafficking is a prime driver of ecosystem service losses in protected areas of the Central American Biological Corridor,” said Bernardo Aguilar-González, executive director of Fundación Neotrópica, an co-author of the conservation paper with Devine and Wrathall. “Narco-related activities undermine traditional forest uses and resource governance, producing significant social and ecological costs. We also identified nine conflicts in the biodiversity hotspots we studied, with most of the burden carried by indigenous peoples and other local communities.”

Most vulnerable to the drug traffickers, the authors said, are areas with strict conservation policies like national parks, where absentee states or private sector actors monopolize governance and exclude the participation of indigenous and other local communities.

“Both the War on Drugs and a conservation model that excludes local communities are driving this problem,” Devine said.

As alarming as their findings are, the researchers argue they posit an attainable solution: Their work also revealed that the rights of indigenous forest communities to govern themselves and control their land can deter trafficking and slow deforestation.

Devine noted in particular the plight of the community concessions in the Maya Biosphere Reserve, which are waiting for their government to act on a request for renewal of concessions that were granted to local communities in the aftermath of Guatemala’s deadly civil war, which ended in 1996.

“Despite their globally-recognized success in reducing deforestation, the community forest concession system is under threat from multiple, competing interests,” Devine said. “Renewing those concessions is among the most pressing needs to avoid further losses.”

Fundación Neotropica is non-governmental, private and non-profit organization, which has been working since 1985 for a balance between human well-being and nature conservation. It promotes social concertation and grassroots-based management for the conservation of ecosystems and their fair and sustainable equitable use and access. Its work today extends throughout Central, South America and West Africa focusing on critical topics facing climate change today such as environmental justice, ecological debt and damage valuation, ecological conflicts and community-based conservation of coastal wetlands.

About the PRISMA Foundation

The PRISMA Foundation is a regional non-profit think-tank focused on environment and development. Its main areas of work currently focus on the region stretching from Mexico and Colombia. Its research and dialogue programs bring together multiple stakeholders to address the problems of resource degradation and development, in order to contribute to more equitable, just and sustainable societies.