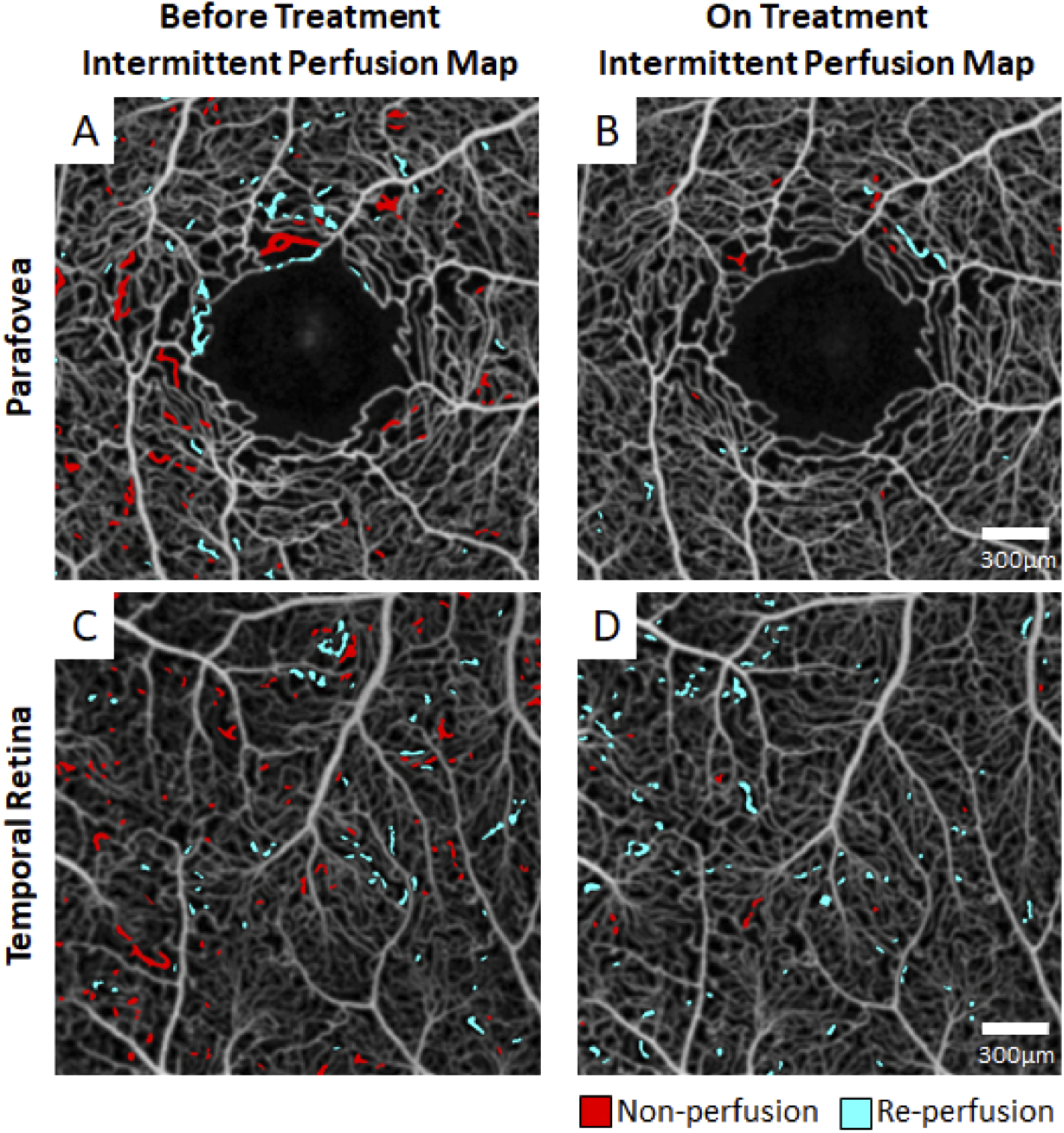 (New York, NY – May 10, 2021)- Ophthalmologists at New York Eye and Ear Infirmary of Mount Sinai have created a new technique to evaluate patients with sickle cell retinopathy and assess the disease before it progresses and leads to permanent vision loss.

Using optical coherence tomography (OCT) angiography—an advanced imaging system that captures the motion of red blood cells in blood vessels non-invasively—the researchers discovered that sequential imaging of affected retinal blood flow in sickle cell patients can help assess how the disease is progressing and how effective their treatment is for reducing focal vascular strokes. Their study was published in the May issue of Biomedical Optics Express.

“We have added a new dimension to ocular imaging technology that no one has thought of before. For the first time, we have shown that by doing rapid, repeated retinal imaging of sickle cell patients, you can see microscopic changes in blood vessels and blood flow. The more the blood flow fluctuates across images, the more at risk patients are for a permanent blockage, which severely damage their eyesight,” says lead investigator Toco Chui, PhD, Director of the Marrus Adaptive Optics Laboratory at New York Eye and Ear Infirmary of Mount Sinai. “Using this approach, we can non-invasively monitor the retina over time and see how a patient is doing before or after initiation of therapy.”

Sickle cell disease is an inherited red blood cell disorder caused by a mutation in hemoglobin. The hemoglobin folds abnormally and distorts red blood cells into a sickle shape; the sickle-shaped cells clump together and can block blood flow. This causes repeated damage to capillaries, which become inflamed and sticky, resulting in permanent blockages that can affect vision in the retina, and in some cases, major bleeding and retinal detachment.

“Our work can be a game-changer for sickle cell patients, especially for those who have no symptoms of retinopathy. It can lead to earlier diagnosis of retinal issues and prevention of irreversible blindness. Without this technology, it’s impossible to judge their eye condition until patients report vision loss, when it’s too late,” says co-author Richard Rosen, MD, Belinda Bingham Pierce and Gerald G. Pierce, MD Distinguished Chair of Ophthalmology, and Chief of Retina Services for the Mount Sinai Health System.

For each patient, researchers stacked their groups of ten scans together and counted the blood vessels that “flickered.” Healthy blood vessels remain white on all scans with no flickering, indicating consistent blood flow in the vessels. On all scans, the untreated sickle cell patients had substantially more flickering (more intermittent blood flow) than patients on treatment, indicating that treatment was effective. Patients with no sickle cell disease had no or very minimal blood flow fluctuations. Investigators used measurements of flicker frequency and locations of flickering to develop a computer algorithm for assessing risk of retinal blood blockages in sickle cell patients.

“For the first time ever in sickle cell disease, we have too many good drugs and we don’t know well enough who should be on what, and what combinations work best. What we hope is that OCT angiography and this new algorithm can be used to solve this problem. Instead of following lab tests and waiting for horrible things to happen to the patient, for the first time we can use this technology to measure the number of vaso-occlusive events that are occurring on a new treatment regimen to find out if it is best for the patient,” says Jeffery Glassberg, MD, Director of the Director of Mount Sinai’s Comprehensive Sickle Cell Program.

Davis B. Zhou, a medical student from the Icahn School of Medicine at Mount Sinai, played an integral role in creating the algorithm for the study during his extended research elective in the Einhorn Center for Clinical Research at the New York Eye and Ear Infirmary of Mount Sinai.

About the Mount Sinai Health System

The Mount Sinai Health System is New York City’s largest academic medical system, encompassing eight hospitals, a leading medical school, and a vast network of ambulatory practices throughout the greater New York region. Mount Sinai is a national and international source of unrivaled education, translational research and discovery, and collaborative clinical leadership ensuring that we deliver the highest quality care—from prevention to treatment of the most serious and complex human diseases. The Health System includes more than 7,200 physicians and features a robust and continually expanding network of multispecialty services, including more than 400 ambulatory practice locations throughout the five boroughs of New York City, Westchester, and Long Island. The Mount Sinai Hospital is ranked No. 14 on U.S. News & World Report’s “Honor Roll” of the Top 20 Best Hospitals in the country and the Icahn School of Medicine as one of the Top 20 Best Medical Schools in country. Mount Sinai Health System hospitals are consistently ranked regionally by specialty and our physicians in the top 1% of all physicians nationally by U.S. News & World Report.