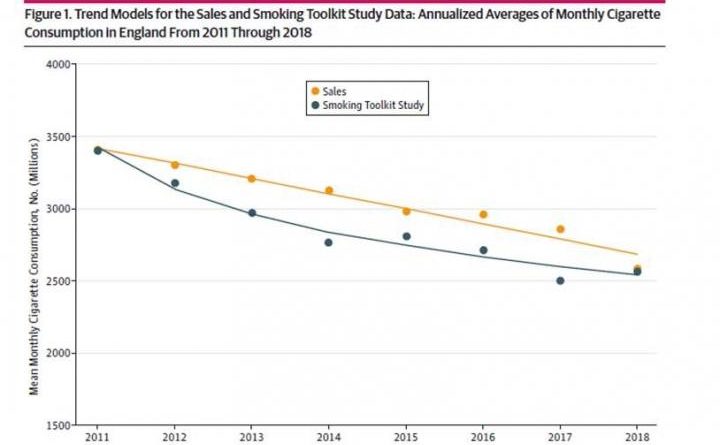 Around 1.4 billion fewer cigarettes are being smoked every year according to new research funded by Cancer Research UK, published today in

Between 2011 and 2018, average monthly cigarette consumption fell by nearly a quarter, equating to around 118 million fewer cigarettes being smoked every month**.

This decline suggests that stricter tobacco laws and taking action to encourage people to quit smoking are working.

The researchers, based at UCL, looked at cigarette sales data for England and compared this with the monthly self-reported cigarette use of over 135,000 individuals from the Smoking Toolkit Study***. They found that the two different methods of looking at how many cigarettes people are smoking provided similar results****.

Over the whole period, the average number of cigarettes smoked monthly declined by 24.4% based on survey data and 24.1% based on sales data from 3.40 billion and 3.41 billion a month to 2.57 billion and 2.58 billion, respectively.

Lead author, Dr Sarah Jackson from UCL’s Tobacco and Alcohol Research Group, said: “It’s brilliant that over a billion fewer cigarettes are being sold and smoked in England every year. The decline in national cigarette consumption has been dramatic and exceeded the decline in smoking prevalence, which, over the same time period, was around 15%. This means that not only are fewer people smoking, but those who continue to smoke are smoking less.

“Studies like this help to give us an accurate picture of cigarette consumption so we know where we’re at and what more needs to be done.”

George Butterworth, senior policy manager at Cancer Research UK, said: “It’s great news that fewer cigarettes are being sold and smoked. Big tobacco said that introducing stricter regulation wouldn’t work and campaigned against it, but this is proof that smoking trends are heading in the right direction. But smoking is still the biggest preventable cause of cancer, and certain groups have much higher rates of smoking, such as routine and manual workers, so we can’t stop here and think job done.

“Last month the government committed to making the UK smokefree by 2030. But stop smoking services, which give smokers the best chance of quitting, have been subject to repeated cuts in recent years. We need the government to fix the funding crisis in local stop smoking services. The tobacco industry could be made to pay for these services to clean up the mess their products have created.”

Over the past 2 decades, several laws have been implemented which have played a huge role in decreasing smoking consumption:

*** Self- reported consumption was measured by the question: “how many cigarettes do you usually smoke?” and participants could report either the number per day or number per week, scaled up to monthly consumption by multiplying by the number of days in a given month. More info on the Smoking Toolkit Study available at:

**** A 1% change in the survey estimate was associated with a 0.98% change in sales estimates.

UCL was founded in 1826. We were the first English university established after Oxford and Cambridge, the first to open up university education to those previously excluded from it, and the first to provide systematic teaching of law, architecture and medicine.

We are among the world’s top universities, as reflected by performance in a range of international rankings and tables, and are committed to changing the world for the better.

Our community of over 41,500 students from 150 countries and over 12,500 staff pursues academic excellence, breaks boundaries and makes a positive impact on real world problems.

Cancer Research UK’s pioneering work into the prevention, diagnosis and treatment of cancer has helped save millions of lives.

Cancer Research UK receives no funding from the UK government for its life-saving research. Every step it makes towards beating cancer relies on vital donations from the public.

Cancer Research UK has been at the heart of the progress that has already seen survival in the UK double in the last 40 years.

Cancer Research UK supports research into all aspects of cancer through the work of over 4,000 scientists, doctors and nurses.

Together with its partners and supporters, Cancer Research UK’s vision is to bring forward the day when all cancers are cured.

For further information about Cancer Research UK’s work or to find out how to support the charity, please call 0300 123 1022 or visit

This part of information is sourced from https://www.eurekalert.org/pub_releases/2019-08/cru-mta082719.php