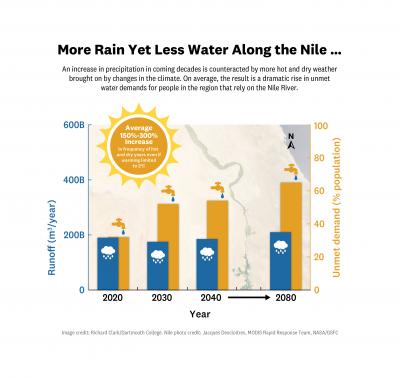 HANOVER, N.H. – August 28, 2019 – Hot and dry conditions coupled with increasing population will reduce the amount of water available for human, agricultural and ecological uses along the Nile River, according to a study from Dartmouth College.

The study, published in the AGU journal


, shows that water scarcity is expected to worsen in coming decades even as climate models suggest more precipitation around the river’s source in the Upper Nile Basin.

An increase in the frequency of hot and dry years could impact the water and food supplies for as many as 250 million people in the Upper Nile region alone toward the end of the century.

, a fellow at Dartmouth’s Neukom Institute for Computational Science and lead author of the study. “This study doesn’t only look at high-level changes in temperature or rainfall, it explains how those conditions will change life for real people.”

The Upper Nile Basin is a chronically water-stressed region that includes western Ethiopia, South Sudan, and Uganda. Nearly all of the rain that feeds the Nile’s northward flow to Egypt and the Mediterranean Sea falls in this area that is already home to 200 million people.

“It’s hard to overstate the importance of the Nile, and the risk of increasing water insecurity in an already water-scarce place,” said

, an assistant professor of geography at Dartmouth and senior researcher on the study. “The Nile has served as an oasis for water, food, commerce, transportation and energy for thousands of years. But we show that the river won’t be able to consistently provide all of those competing services in coming decades.”

Using a mix of available climate models, the study demonstrates that it is likely that the Upper Nile Basin will experience an increase in regional precipitation for the remainder of this century. The projected upward trend in precipitation comes as a result of increased atmospheric moisture normally associated with warming.

At the same time, the study finds that hot and dry years in the region have become more frequent over the past four decades. Despite some uncertainties in the models, this trend is projected to continue throughout the century with the frequency of hot and dry years as much as tripling even if warming is limited to only 2 degrees Celsius.

Further complicating conditions, population in the region is projected to nearly double by 2080 and will impose large additional demands on water resources.

As a result, the report finds that increased evaporation from higher temperatures coupled with the doubling of runoff demand from a larger population counteract any projected increase in rainfall. The trend of increased precipitation will simply be too slow to result in significant changes in runoff over the time periods studied.

“At first glance you would expect more rain to reduce scarcity, but not on the Nile. The dice are loaded for additional hot and dry years in the future, meaning increasing shocks to households because of crop yield declines and less water available for households to be resilient against warming temperatures,” said Mankin.

According to the study, annual demand for water runoff from the Nile will regularly exceed supply by 2030, causing the percentage of the Upper Nile population expected to suffer from water scarcity to rise sharply. By 2080, the study estimates that as much as 65 percent of the regional population – 250 million people – could face chronic water scarcity during excessively hot and dry years.

Even during normal years, the researchers found that as many as 170 million people on average could encounter unmet demand annually by the latter part of the century. Fewer than 25 million people in the region are projected to suffer from water scarcity in 2020.

Most of the increase in water demand is expected to occur during a period of rapid population rise between 2020 and 2040.

“The Nile Basin is one of several fast growing, predominantly agricultural regions that is really on the brink of severe water scarcity. Climate change coupled with population growth will make it much harder to provide food and water for everyone in these areas. Those environmental stresses could easily contribute to migration and even conflict,” said Coffel.

To confirm the connection between the impact on food supply and climate conditions in the region, the researchers assessed agricultural yields data from six major crops in Ethiopia’s food supply: maize, millet, barley, pulses, sorghum, and wheat.

While food shortages in the region are complex, and can result from a variety of factors such as governance and conflict, the study demonstrates that nearly all recent regional crop failures have occurred amid hot and dry conditions when water runoff is scarcer.

According to the paper, the frequency of hot and dry years that can cause poor crop yields is projected to increase from 10 percent to 15 percent depending on modelling assumptions on climate and greenhouse gas emissions. The result is less water and less food for a growing population.

“We already have a global-scale picture of water scarcity, but that does not tell the story for people in any particular place. With this study, we are able to explain these changes in water scarcity and what that actually means for the millions of people who are going to be in water poverty. It is no longer just colors of basins on a map.”

Researchers from Columbia University and the United States Military Academy contributed to this study.

Founded in 1769, Dartmouth is a member of the Ivy League and offers the world’s premier liberal arts education, combining its deep commitment to outstanding undergraduate and graduate teaching with distinguished research and scholarship in the arts and sciences and its leading professional schools: the Geisel School of Medicine, the Guarini School of Graduate and Advanced Studies, Thayer School of Engineering and Tuck School of Business.

This part of information is sourced from https://www.eurekalert.org/pub_releases/2019-08/dc-mry082619.php