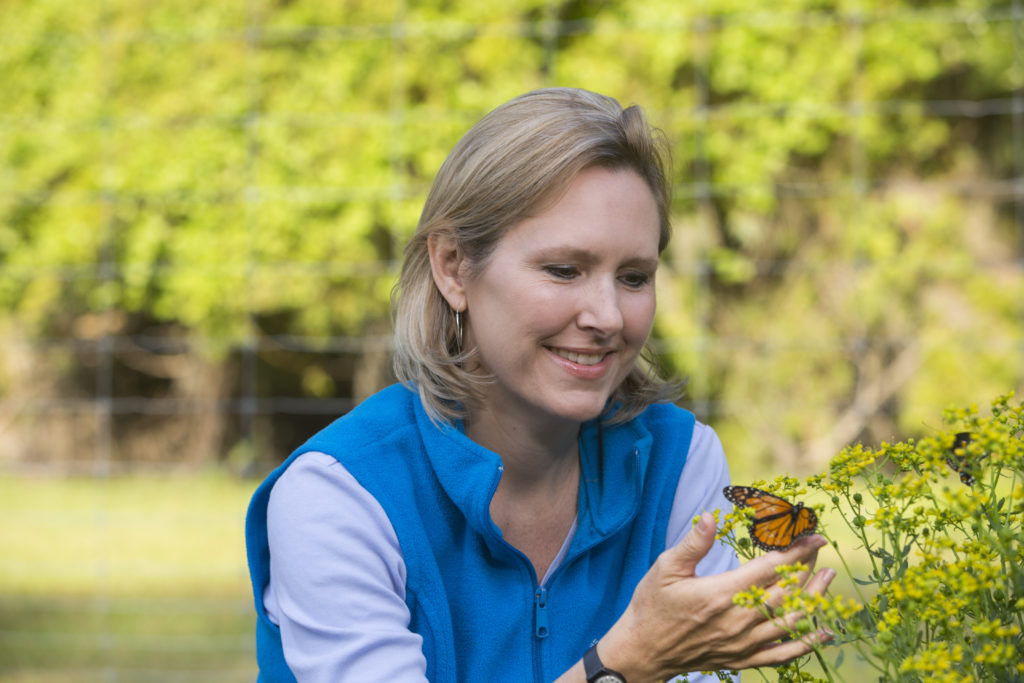 North American monarch butterflies are famous for their long-distance migrations, but in recent decades some monarchs have established resident populations in the southeastern U.S. A new study from the University of Georgia sheds light on how a harmful parasite, Ophryocystis elektroscirra, or OE, is able to maintain high levels of infection in these resident populations by using more than one transmission strategy.

The study, “Multiple transmission routes sustain high prevalence of a virulent parasite in a butterfly host,” was led by Ania Majewska, a doctoral student in the Odum School of Ecology, with senior authors Sonia Altizer, Georgia Athletic Association Professor of Ecology, and Richard Hall, an assistant professor in the Odum School and the College of Veterinary Medicine department of infectious diseases. It appears in Proceedings of the Royal Society B.

Monarchs might be the best-known of North America’s butterflies, thanks to their iconic migration and the number of conservation efforts they have inspired. In the southeastern U.S., however, some monarchs have become year-round residents, a shift that appears to be caused by the planting of tropical milkweed (Asclepias curassavica). Unlike native milkweed species, this popular garden plant doesn’t die back in the winter unless it’s exposed to freezing temperatures, allowing monarchs to forego migration and breed year-round in warm climates.

Previous research by the authors and their colleagues found that OE infects half or more of the monarchs in these resident populations, despite known harmful effects of infection, including wing deformities, reduced flight performance, lower reproductive success and shorter lifespans. For the most part, parasites this virulent aren’t highly prevalent in the populations they infect, as their hosts die off before they have a chance to spread too widely.

Using a combination of field work and mathematical modeling, the researchers set out to determine the mechanisms driving these OE infection hotspots in the Southeast.

They conducted field research at the UGA Center for Research and Education at Wormsloe, just outside Savannah, Georgia, in experimental garden plots planted with tropical milkweed. From May to October 2015 they monitored the gardens to measure OE prevalence over time and to determine exactly how OE was being transmitted within the butterfly population there.

OE infects monarchs when caterpillars eat spores of this protozoan. Infected female monarchs can infect their own offspring through spores shed onto their eggs, a process known as vertical transmission. Environmental transmission occurs when caterpillars encounter OE spores shed by unrelated adult monarchs onto milkweed leaves where the caterpillars feed. Finally, uninfected adults can acquire spores through contact with infected adults, which don’t cause disease in the exposed adults, but can infect a fraction of their offspring, a process called adult spore transfer.

To understand how these transmission routes changed over time, the researchers tested butterflies for infection by pressing tape against their bodies and looking for OE spores. They also determined the proportion of milkweed leaves and uninfected butterflies that received spores through contact with infected adults.

They found that the fraction of monarchs infected as caterpillars increased from very low levels to nearly 100% over a period of five months. For monarchs that emerged initially as uninfected adults, 81% had acquired OE spores from infected adults by the end of the study period. They also found that the proportion of milkweed leaves receiving spores rose from zero to roughly 75% over that time.

The team developed a mathematical model to simulate changes in parasite transmission and monarch population size, using data from the current and previous studies. The model showed that environmental and adult spore transfer were crucial for establishing the parasite, but once more than half of the population was infected, vertical transmission took over.

“The model shows that all three of these transmission routes are necessary to explain how OE rapidly infects the majority of butterflies in southeastern resident breeding sites,” said Hall. “When infected butterflies are in short supply, depositing spores onto milkweed and healthy butterflies allows the parasite to reach more caterpillars, ramping up infection levels until mother-to-offspring transmission predominates.”

The study’s other co-authors are Stuart Sims and Anna Schneider. Support for the research was provided by Craig and Diana Barrow, Sarah Ross, the Wormsloe Foundation, the Xerces Society, Pollinator Partnership, Monarch Joint Venture, the Odum School of Ecology, the National Science Foundation, and the Strategic Environmental Research and Development Program of the Department of Defense and U.S. EPA. It is available online at https://royalsocietypublishing.org/doi/10.1098/rspb.2019.1630.