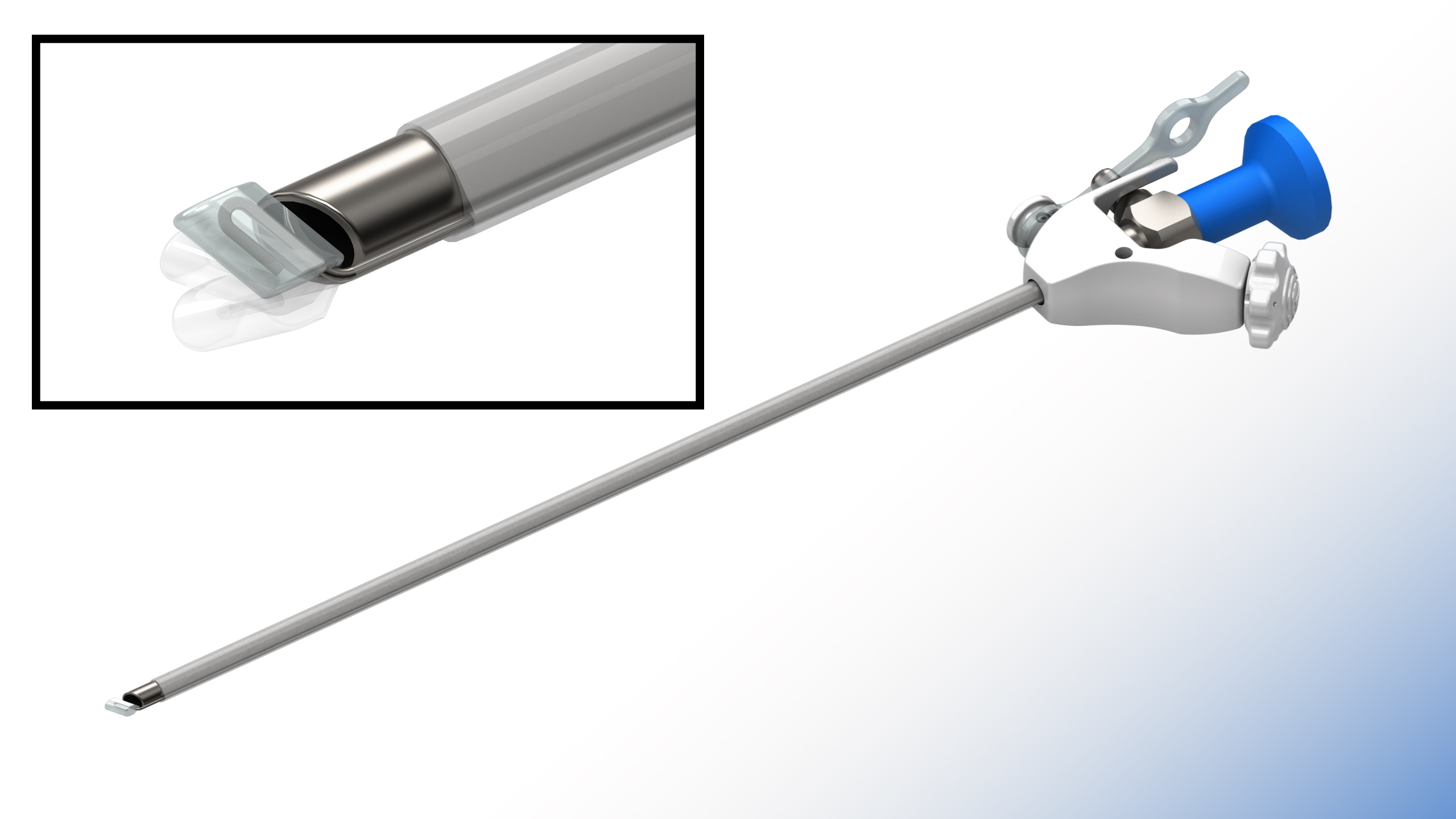 Surgeons perform many minimally invasive abdominal, thoracic, and pelvic operations with the aid of laparoscopes—slender instruments that can be inserted through the external layers of the body to provide a view of internal organs and structures for diagnosis or repair. Minimally invasive surgeries are faster to perform and recover from than open surgeries, among numerous other benefits. Doctors perform some 3.5 million laparoscopic surgeries each year in the United States among nearly 15 million performed globally.

A pervasive problem for surgeons, however, has been that the camera lens at the end of the laparoscope often becomes clouded by condensation or by blood, fat, and other matter. A team at ClearCam, Inc., with funding from the National Institute of Biomedical Imaging and Bioengineering (NIBIB) and ties to the University of Texas (UT) at Austin, designed a device that can be used with most laparoscopes that wipes the laparoscope lens clean, much the same way that a wiper blade clears a fogged up window.

“The ClearCam product is a novel bioengineering solution to a demonstrated problem during laparoscopic procedures,” said Todd Merchak, program officer for the Small Business Innovation Research grant program at NIBIB. “The team’s innovative approach provides the surgical community with a tool that meets critical needs.”

“We call the product the ClearCam Kelling device,” said Doug Stoakley, co-founder and president at ClearCam. The alias, Kelling, is a tribute to Georg Kelling, a German internist who pioneered some of the first laparoscopic procedures at the turn of the 20th century. “The Kelling device can be used in any of the surgeries that use a straight-stick laparoscope—that is, OB/GYN procedures in the pelvis, general surgery procedures in the belly/gut, and thoracic surgery.”

Surgeons have made laparoscopy the most widely used mode of surgery for non-emergency operations. However, laparoscopes often get dirty as they pass through a device that provides access to the internal site, called a trocar. The trocar is also a portal for other surgical instruments such as graspers, scissors, and staplers, which can create some of the debris encountered in the trocar.

The Kelling device resolves the widely acknowledged and irritating problem in minimally invasive surgery when clinicians must continually remove the scope from surgery and clean it. “We lose our visual platform and our visual field, and we have to re-orient ourselves when we put the scope back in,” explains general surgeon John Uecker, M.D., associate professor in the UT Dell School of Medicine and co-founder and CEO of ClearCam. “We are doing very detailed and precise work and we are constantly being interrupted; you do not need to be a clinician to understand how frustrating that must be.”

The Kelling device is a long sheath that slides over the top of the scope. It has a handle on one end and a wiper component on the inserted tip. “We say that we make a windshield wiper for a laparoscope,” Stoakley said. “It’s a great description [and] it certainly describes what the product does.”

The path from inception to U.S. Food and Drug Administration medical devices approval, received this past February, has been a speedy one for the device. Just four years ago, two of ClearCam’s co-founders, Christopher Rylander, Ph.D., associate professor in the UT Austin Department of Mechanical Engineering and Uecker took the first steps on that path. Rylander invited Uecker to visit a third-year engineering biodesign class at UT Austin to describe problems and frustrations that surgeons commonly experience in the operating room. Rylander challenged the class to build a device that can clean laparoscopes during surgeries. “This was meant to be an intellectual prompt to the engineering students in the room to work on solving that problem,” Stoakley said.

Chris Idleson, Ph.D., then a student in the class, latched onto the idea, developing a pre-prototype of Kelling to solve the problem in a straightforward, mechanical way, without electronics or chemicals. He designed and built the pre-prototype in the course of the following year and half.

Subsequently, the team of four founded ClearCam, Inc., in January 2018, proceeding to develop the product in earnest. They since have placed third in the Rice Business Plan competition and received an invitation to MedTech Innovator, where they were listed among the top 25 innovative companies in health tech.

The team’s successful NIBIB small business innovator grant award provided important validation for their early efforts to launch a business based on the laparoscope cleaning platform. “I cannot overstate the value in crafting the grant application because it forced us to be a bit rigid and thoughtful about numerous elements of our business,” Stoakley said. “It was a great way to crystalize our ideas and put them down in a cogent manner.”

Stoakley added that the grant has been an important element in enabling the company’s progress. “It allowed us to do a lot and keep our momentum.” ClearCam negotiated an agreement with the University of Texas to license the original technology; it has other projects in progress.