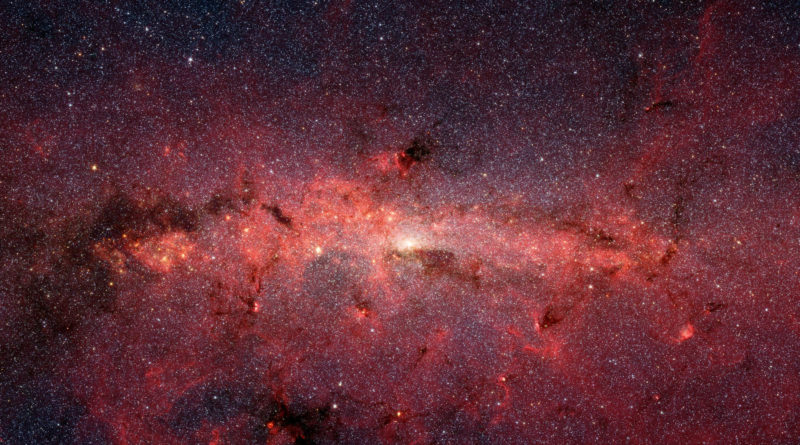 The center of our galaxy is a crowded place: A black hole weighing 4 million times as much as our Sun is surrounded by millions of stars whipping around it at breakneck speeds. This extreme environment is bathed in intense ultraviolet light and X-ray radiation. Yet much of this activity is hidden from our view, obscured by vast swaths of interstellar dust.

NASA’s upcoming James Webb Space Telescope is designed to view the universe in infrared light, which is invisible to the human eye, but is very important for looking at astronomical objects hidden by dust. After its launch, Webb will gather infrared light that has penetrated the dusty veil, revealing the galactic center in unprecedented detail.

“Even one image from Webb will be the highest quality image ever obtained of the galactic center,” said Roeland van der Marel of the Space Telescope Science Institute (STScI), principal investigator on one planned study that will focus on imaging.

Telescopes on the ground and in space have provided tantalizing glimpses of the residents of the galactic center. Astronomers have tracked stars orbiting the black hole, some of which approach close enough to provide a test of Einstein’s general theory of relativity. However, so far, only the brightest stars are detectable.

“We’re only seeing the tip of the iceberg from the ground. Webb will be able to study fainter stars and tell us more about the overall stellar population,” said Torsten Böker of the European Space Agency and STScI, a co-investigator on a second planned study of the galactic center that will focus on spectroscopy.

Scientists already have been surprised to find low-mass infant stars forming close to the supermassive black hole – some within just a few light-years of its grasp. Theoretically, the black hole’s immense gravity and harsh radiation environment should disrupt any gas clouds and prevent them from collapsing into stars. Yet these baby stars called protostars have persisted. Webb’s observations may reveal additional protostars, and could provide clues to how stars can form in such an unlikely spot.

The Milky Way’s supermassive black hole, known to astronomers as Sagittarius A* (pronounced A-star) also will fall under Webb’s gaze. It is surrounded by a disk of gas and dust, some of which will inevitably fall into the black hole. Astronomers have observed flares of light when the black hole gulped a clump of material. However, they have never detected the glow from the black hole’s disk.

“Detecting the disk around Sagittarius A* with Webb would be a home run,” Böker said.

Data from Webb also could help address broader questions of how galaxies form — such as the longstanding “chicken and egg” problem of which came first, the galaxy or the black hole.

“Does the black hole come first and stars form around it? Do stars gather together and collide to form the black hole? These are questions we want to answer,” said Jay Anderson of STScI, a co-investigator on one of the studies.

Additionally, studies have shown that the mass of a galaxy’s central black hole is related to the total mass of the surrounding stars, but the reasons for this relationship remain unknown.

“Are there any clues to this mass correlation close to the black hole? Or has recent star formation wiped out signs of what might have happened in the past?” added Marcia Rieke of the University of Arizona, principal investigator on Webb’s NIRCam instrument.

Ultimately, the most exciting results from Webb’s observations might be the unexpected. For example, Webb might find stars in unusual orbits. Or, Webb might spot a gas cloud destined to be ripped apart by gravitational forces.

“We would like to see something unusual, like a star being gobbled up,” said van der Marel.

“So many interesting, strange things happen at the centers of galaxies. We want to find out what’s happening in our own,” said Rieke.

The observations described here will be taken as part of Webb’s Guaranteed Time Observation (GTO) program. The GTO program provides dedicated time to the scientists who have worked with NASA to craft the science and instrument capabilities of Webb throughout its development.

The James Webb Space Telescope will be the world’s premier space science observatory when it launches in 2021. Webb will solve mysteries of our solar system, look beyond to distant worlds around other stars, and probe the mysterious structures and origins of our universe and our place in it. Webb is an international project led by NASA with its partners, ESA (European Space Agency) and the Canadian Space Agency.