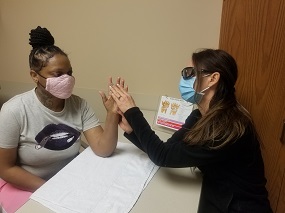 DETROIT – For the past 21 years, Keisha Triplett lived with pain in her left wrist that limited her quality of life. After undergoing total wrist replacement surgery on May 4, 2021 at Henry Ford West Bloomfield Hospital, Triplett is on her way to recovery and a return to a more normal, pain-free life.

Also referred to as total wrist arthroplasty, the surgery involves replacing a severe arthritic wrist joint with an artificial joint made of metal and plastic components. The procedure relieves pain and restores function when all other treatments fail to provide relief.

Triplett’s procedure was the first to be performed at Henry Ford Health System by Charles Day, M.D., Chief of Hand & Upper Extremity Surgery for the Department of Orthopedic Surgery.

“For a long time, I didn’t know what was causing the pain,” said Triplett. “My wrist was constantly hurting and so weak that I could do very little with my left hand.”

Since 2005, Triplett dealt with constant pain and swelling in her left wrist from rheumatoid arthritis, an autoimmune disease that can cause joint pain and damage throughout the body. The swelling and pain continued to the point where she had little use of her left arm and could no longer wear her wristwatch on her wrist.

“I couldn’t wash dishes, fold laundry, make my bed or hold a cup of coffee in the morning. Even the simplest motion like opening a bag of chips was too painful,” said Triplett. Worst of all, last year she couldn’t hold her 1-year-old grandson.

In February 2020, she decided she couldn’t continue to live with the pain and met with Dr. Day to have x-rays taken. Imaging showed that Triplett had no cartilage in her left wrist causing the bone-on-bone pain she had been experiencing for so long.

Dr. Day offered Triplett the only two available surgical solutions to help alleviate the pain, total wrist replacement or fusion of the wrist. “With a wrist fusion, you cannot bend the wrist,” explained Dr. Day who has done more than a dozen total wrist replacements during his career. He is the only orthopedic surgeon at Henry Ford to have performed the procedure and one of very few in Michigan to offer the surgery.

Dr. Day compared total wrist replacement to a press fit total knee or hip replacement that use metal alloy components on either side of the joint with a polyethylene insert to alleviate the bone-on-bone pain.  During the procedure, the surgeon very carefully and skillfully removes the first row of carpal bones and then inserts the prosthetic components. The carpal component is connected to the metacarpal bones or fingers, while a plastic spacer provides that important cushion that allows for pain-free motion between hand and wrist. A radial component is also inserted into the radius bone and the sometimes-arthritic ulnar head may also be removed from the ulna bone.

The wrist is made up of eight small bones called the carpal bones, or the carpus. These join the hand to the two long bones in the forearm known as the radius and ulna. The carpal bones are small square, oval, and triangular bones.

While the wrist replacement allows for 80 degrees of motion, there is no degree of motion with a fusion.  The biggest difference with the wrist procedure is that the surgeon has to be much more precise about the placement of the wrist joint prosthesis, since the bones are so much smaller than those in the knee.

Despite the pain, the decision between total wrist replacement and wrist fusion was still not an easy one for Triplett. “I was very nervous about this surgery,” said Triplett who had two prior surgeries related to rheumatoid arthritis in two of her right hand’s fingers and in her left foot. “The wrist surgery was quite different. I was nervous to have the surgery, but everyone reassured me that I was going to be handled with great care and I was.”

About 60% of people with rheumatoid arthritis have wrist symptoms within two years of diagnosis, and more than 90% within 10 years. As with Triplett’s case, these are the most likely candidates eligible for a total wrist replacement. Also, studies have shown that some fused wrists can remain tender and functional disability can be debilitating. Total wrist replacement is a relatively new and uncommon procedure.

Introduced in the 1980s with little clinical success, total wrist replacement didn’t become commercially available until 2014. According to SmartTRAK, a leading provider of market data for the orthopedic industry, only 372 total wrist replacement procedures were performed in the U.S. in 2019 and that number was estimated to be lower (316) for 2020.

Triplett’s surgery and hospitalization at Henry Ford West Bloomfield Hospital lasted about 8 hours. Her first follow-up visit with Dr. Day thirteen days following the surgery showed that she is recovering faster than expected, “I can move my hand up and down and can move my fingers around without any pain. I am so excited about how well I’m doing,” said Triplett. “Having the total wrist replacement surgery was the best decision I ever made.”

“She’s doing great,” said Dr. Day. “She’s ahead of schedule and can already feel the positive difference the surgery has made.”

The 43-year-old Triplett started therapy at Henry Ford Macomb Health Center – Fraser where she is working with occupational therapist and certified hand therapist Heidi Spyridakis, “Keisha is doing great and is very happy with her progress,” said Spyridakis. “I thought my first therapy visit was going to be hard, but it was very easy. My therapist Heidi is wonderful and has lots of patience,” said Triplett.

Since her surgery, Triplett is experiencing no pain and is well on her way to improving her quality of life.

The largest of these is Henry Ford Hospital in Detroit, a quaternary care research and teaching hospital and Level 1 Trauma Center recognized for clinical excellence in cardiology, cardiovascular surgery, neurology, neurosurgery, and multi-organ transplants. The health system also provides comprehensive, best-in-class care for cancer at the Brigitte Harris Cancer Pavilion, and orthopedics and sports medicine at the William Clay Ford Center for Athletic Medicine – both in Detroit.

As one of the nation’s leading academic medical centers, Henry Ford Health System annually trains more than 3,000 medical students, residents, and fellows in more than 50 accredited programs, and has trained nearly 40% of the state’s physicians. Our dedication to education and research is supported by nearly $100 million in annual grants from the National Institutes of Health and other public and private foundations.