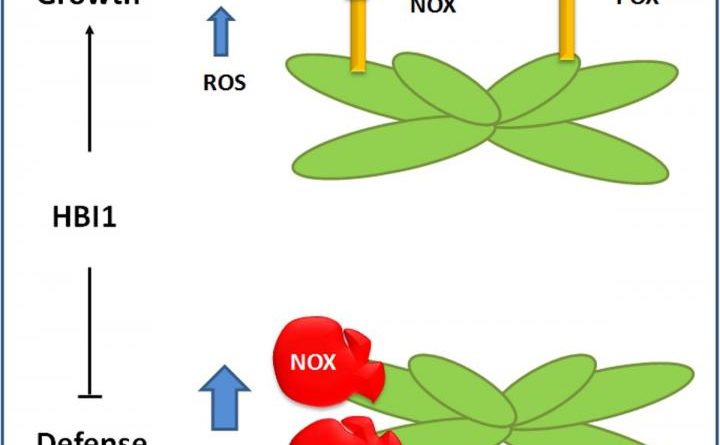 Grow or defend yourself – a decision plants need to make on a daily basis, due to their inability to do both simultaneously. For a long time, it was thought that the reason for the growth-defence trade-off might be a question of energy resources. When a plant is defending itself against pathogens, energy could simply be limited for the plant to be growing at the same time, and vice versa. A recent paper published in

shines a new light on the poorly understood mechanisms of the trade-off, clarifying that the actual underlying reasons is the incompatibility of the molecular pathways regulating plant growth and defence.

In addition to the observed trade-off, growth and defence need seemingly contradicting requirements. Growth is a process which often necessitates the loosening of the cell wall so that the cells have space to expand. Defence, in many cases calls for a tightening of the cell wall. In this way, the cells form a more solid barricade which is harder to penetrate for pathogens. Within their paper the researchers show that the growth-related transcriptional regulator HBl1 (Homolog of Bee2 Interacting with lBH 1) controls both processes within plants.

By differentially leveraging the expression of NADPH oxidases (NOXs) and peroxidases (POXs), HBl1 regulates ROS homeostasis within the apoplast (the space in between the cell walls of the plant). When plants need to grow, HBI1 is active and configures apoplastic ROS levels that support growth by activating specific NOX genes and repressing specific POX genes. In case of pathogen attack, HBI1 needs to be deactivated, resulting in increased apoplastic ROS levels through the activation of a NOX gene and several POX genes that represses growth but increase disease resistance within the plant.

Due to the contrasting nature of the two processes – both being regulated by the same transcription factor whilst requiring conflicting ROS levels – the researchers showed that the growth-defence trade-off is caused by the incompatibility of the pathways, and not by limited energy resources.

The project, which had started four years ago as a Bachelor thesis, was carried out in Aachen. Due to a recent move of the group supervisor, Dr. Schippers, to the Leibniz Institute of Plant Genetics and Crop Plant Research (IPK) in Gatersleben, the project was partially evaluated and written up at the Gaterslebener Institute. Dr. Schippers let us know: “With our current findings, we are starting to understand one of the mechanisms behind the growth-defence trade-off. This understanding is crucial if we want to improve plant biomass production without risking impairment of their ability to defend against pathogens.”

Dr. Schippers’ “Seed Development” research group at the IPK will continue to investigate the different pathways within plant seeds. Dr. Schippers: “As it stands, there are more than 70 peroxidases and 10 NADPH oxidases within plants and we don’t exactly know what they are doing. They are of particular interest to me, as peroxidases and oxidases have similar effects within plants and animals. This indicates that their functional conservation predates that of hormones, as hormone signalling pathways evolved specific pathways in plants and humans. We aim to fully untangle these pathways at the cellular level – so that one day, we can reveal their regulation and function during the development of plants.”

– Plants experience a trade-off between growth and defence, being unable to do both simultaneously. It was hypothesised, that this was due to limited energy resources within plants.

– New findings show that the transcription factor HBl1 mediates growth and defence responses through the regulation of ROS homeostasis. The contrasting ROS requirements of the processes result in incompatibility between both pathways, explaining the growth-defence trade-off.

– The research was performed by scientists at the RWTH Aachen University and partially evaluated at the IPK in Gatersleben due to the recent move of the group leader, Dr. Jozefus Schippers.

– The results were published in

– Dr. Schippers will continue to investigate the pathways affecting plant development at the IPK in Gatersleben as newly appointed head of the group “Seed Development”.

This part of information is sourced from https://www.eurekalert.org/pub_releases/2019-08/liop-mtt082719.php