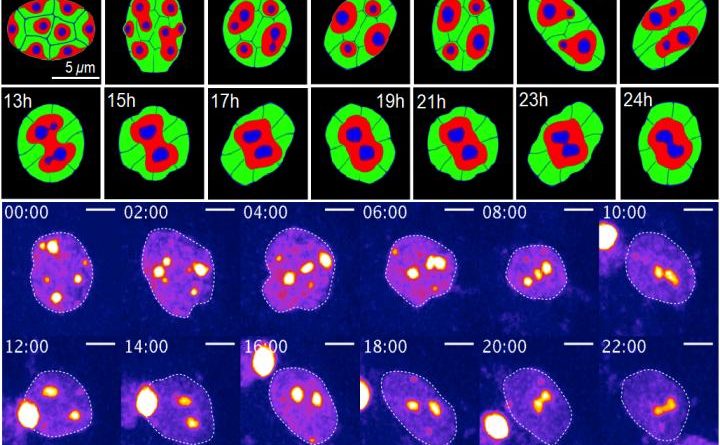 Nocturnal and diurnal mammals see the same – but only for a brief time. When mice are born, the chromatin in the cells of their eyes has a diurnal structure. Day by day, the layout of this chromatin slowly inverts, allowing the mice to see at night. How this change happens was a mystery.

Sungrim Seirin-Lee, Associate Professor, and Hiroshi Ochiai, Lecturer, in the Graduate School of Integrated Sciences for Life at HU, suspected that the chromatin was making the shape of the nuclei change shape. “When we started this research, our hypothesis was based 100 percent on mathematics,” Seirin-Lee said. “Because of our mathematical modeling, we found that nuclear deformation might be a key point in DNA’s structure change.”

To describe the movement of chromatin, Seirin-Lee and her colleagues used a type of mathematical modeling called phase-field modeling. A method commonly used in physics; phase-field modeling can be used to do things like telling apart ice from water. However, according to Seirin-Lee, “it is not common in the biological sciences. In chromatin dynamics, it is the first trial in the world!” Using this function, the group could see the movement of chromatin and nucleus by determining and defining the inside and outside of the nucleus, as well as euchromatin versus heterochromatin.

Then, with the assistance Ochiai, they put their model to the test on neural stem cells, which mimic retinal cells. After treating the cells with proteins that keep heterochromatin at the nuclear periphery, deformation stopped. Chromatin clustering increased, and nuclear architecture could not finish inverting. This finding was consistent with Lee’s mathematical modeling.

Ultimately, Seirin-Lee and her colleagues want to see if their findings are universal to mammal cells. “At this stage, we think it is just mouse eyes,” Seirin-Lee said, “but we don’t know! Maybe humans could have such structures by dynamic nuclear deformation.” Next, Seirin-Lee is looking to tackle the intermediate structure, or a sort of hybrid between conventional and inverted architecture of the nucleus.

Since its foundation in 1949, Hiroshima University has strived to become one of the most prominent and comprehensive universities in Japan for the promotion and development of scholarship and education. Consisting of 12 schools and 11 graduate schools, ranging from International Development and Cooperation to Integrated Arts and Sciences, the university has grown into one of the most distinguished research universities in Japan. English website:

This part of information is sourced from https://www.eurekalert.org/pub_releases/2019-08/hu-msw082519.php