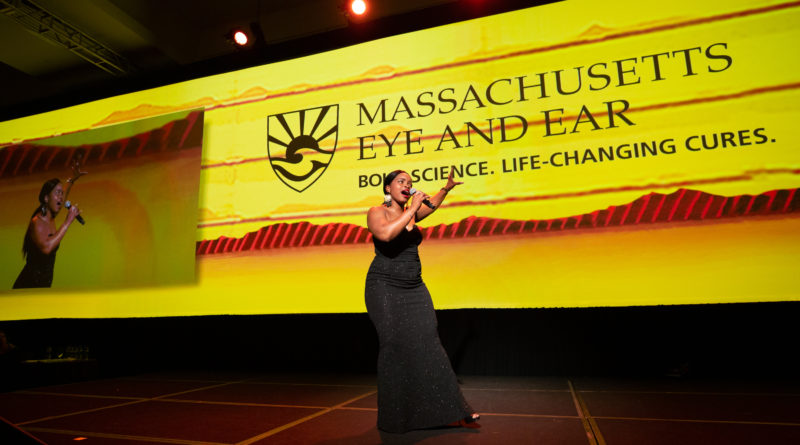 Boston, Mass. — Massachusetts Eye and Ear raised more than 1.3 million at its 10th Annual Sense-ation! Gala on October 7, 2019, at the Westin Boston Waterfront. The gala is held annually to support Mass. Eye and Ear and the Curing Kids Fund, and their goals of accelerating innovations, research and cures for people with conditions that affect vision, hearing and other debilitating disorders of the eyes, ears, nose, throat, head and neck.

Guests were treated to a specially-arranged performance from cast members from Disney’s The Lion King, presented by Broadway In Boston and currently playing the Citizens Bank Opera House through October 27. Winner of six Tony Awards®, including Best Musical, The Lion King features some of Broadway’s most recognizable music, and the crowd enjoyed renditions of “Hakuna Matata,” “The Circle of Life,” and “Can You Feel the Love Tonight.”

Founding gala chair Joey McIntyre (New Kids on the Block) kicked off the event with an original song looking back at the previous decade of “sense-ational things.” Joey and Barrett McIntyre are parents of a child who was born with severe hearing loss, and are long-time supporters of Mass. Eye and Ear.

Billy Costa, Co-Host of KISS 108’s “Matty in the Morning” and NESN’s “Dining Playbook, served as the event’s host. Mass. Eye and Ear Chairman and Boston Celtics CEO Wyc Grousbeck generously announced that he would double any donations of up to $5,000 during the Be Bold. Change Lives. Giving Opportunity. Grousbeck has been chairman of the board of directors at Mass. Eye and Ear since 2010, and became involved because his family has been touched by blindness.

The event’s program was rounded out by scientists sharing updates on their research, including ongoing work from researchers on new stem cell, gene editing, and computer modeling studies ongoing at Mass. Eye and Ear. Patients and families shared stories of their complex medical care and survival thanks to treatment at Mass. Eye and Ear.

“We are grateful to Wyc Grousbeck and Emilia Fazzalari for their unwavering support and leadership, and founding honorary chairs Joey and Barrett McIntyre, for making this event so special year after year,” says aid John Fernandez, President of Mass. Eye and Ear. “Thank you to our amazing patients, clinician-scientists, and generous donors, for all you do to make Mass. Eye and Ear the world leader in eye and ENT care and research.”

Mass. Eye and Ear clinicians and scientists are driven by a mission to find cures for blindness, deafness and diseases of the head and neck. Each year, nearly 300,000 people from more than 80 countries seek care at Mass. Eye and Ear, a member of Partners HealthCare with 20 locations in and around Boston.

About Massachusetts Eye and Ear

Massachusetts Eye and Ear, founded in 1824, is an international center for treatment and research and a teaching hospital of Harvard Medical School. A member of Partners HealthCare, Mass. Eye and Ear specializes in ophthalmology (eye care) and otolaryngology–head and neck surgery (ear, nose and throat care). Mass. Eye and Ear clinicians provide care ranging from the routine to the very complex. Also home to the world’s largest community of hearing and vision researchers, Mass. Eye and Ear scientists are driven by a mission to discover the basic biology underlying conditions affecting the eyes, ears, nose, throat, head and neck and to develop new treatments and cures. In the 2019–2020 “Best Hospitals Survey,” U.S. News & World Report ranked Mass. Eye and Ear #4 in the nation for eye care and #2 for ear, nose and throat care. For more information about life-changing care and research at Mass. Eye and Ear, visit our blog, Focus, and follow us on Instagram, Twitter and Facebook.