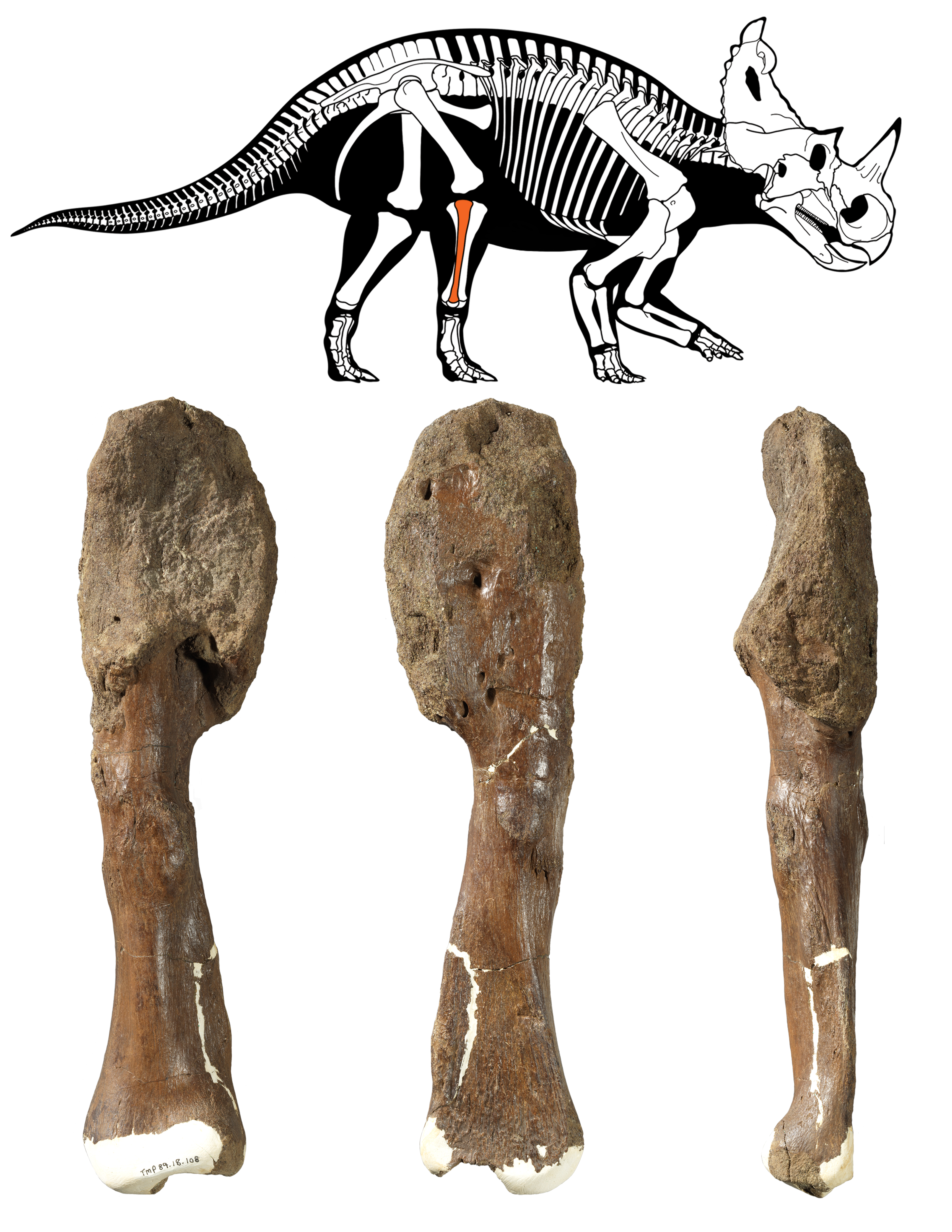 A collaboration led by the Royal Ontario Museum (ROM) and McMaster University has led to the discovery and diagnosis of an aggressive malignant bone cancer — an osteosarcoma — for the first time ever in a dinosaur. No malignant cancers (tumours that can spread throughout the body and have severe health implications) have ever been documented in dinosaurs previously. The paper was published August 3rd in the prestigious medical journal The Lancet Oncology.

The cancerous bone in question is the fibula (lower leg bone) from Centrosaurus apertus, a horned dinosaur that lived 76 to 77 million years ago. Originally discovered in Dinosaur Provincial Park in Alberta in 1989, the badly malformed end of the fossil was originally thought to represent a healing fracture. Noting the unusual properties of the bone on a trip to the Royal Tyrrell Museum in 2017, Dr. David Evans, James and Louise Temerty Endowed Chair of Vertebrate Palaeontology from the ROM, and Drs. Mark Crowther, Professor of Pathology and Molecular Medicine, and Snezana Popovic, an osteopathologist, both at McMaster University, decided to investigate it further using modern medical techniques. They assembled a team of multidisciplinary specialists and medical professionals from fields including pathology, radiology, orthopaedic surgery, and palaeopathology. The team re-evaluated the bone and approached the diagnosis similarly to how it would be approached for the diagnosis of an unknown tumour in a human patient.

“Diagnosis of aggressive cancer like this in dinosaurs has been elusive and requires medical expertise and multiple levels of analysis to properly identify,” says Crowther, who is also a Royal Patrons Circle donor and volunteer at the ROM. “Here, we show the unmistakable signature of advanced bone cancer in 76-million-year-old horned dinosaur — the first of its kind. It’s very exciting.”

After carefully examining, documenting, and casting the bone, the team performed high-resolution computed tomography (CT) scans. They then thin-sectioned the fossil bone and examined it under a microscope to assess it at the bone-cellular level. Powerful three-dimensional CT reconstruction tools were used to visualize the progression of the cancer through the bone. Using this rigorous process, the investigators reached a diagnosis of osteosarcoma.

To confirm this diagnosis, they then compared the fossil to a normal fibula from a dinosaur of the same species, as well as to a human fibula with a confirmed case of osteosarcoma. The fossil specimen is from an adult dinosaur with an advanced stage of cancer that may have invaded other body systems. Yet it was found in a massive bonebed, suggesting it died as part of a large herd of Centrosaurus struck down by a flood.

“The shin bone shows aggressive cancer at an advanced stage. The cancer would have had crippling effects on the individual and made it very vulnerable to the formidable tyrannosaur predators of the time,” says Evans, an expert on these horned dinosaurs. “The fact that this plant-eating dinosaur lived in a large, protective herd may have allowed it to survive longer than it normally would have with such a devastating disease.”

Osteosarcoma is a bone cancer that usually occurs in the second or third decade of life. It is an overgrowth of disorganized bone that spreads rapidly both through the bone in which it originates and to other organs, including most commonly, the lung. It is the same type of cancer that afflicted Canadian athlete Terry Fox and led to the partial amputation of his right leg prior to Fox’s heroic Marathon of Hope in 1980.

“It is both fascinating and inspiring to see a similar multidisciplinary effort that we use in diagnosing and treating osteosarcoma in our patients leading to the first diagnosis of osteosarcoma in a dinosaur,” says Seper Ekhtiari, an Orthopaedic Surgery Resident at McMaster University. “This discovery reminds us of the common biological links throughout the animal kingdom and reinforces the theory that osteosarcoma tends to affect bones when and where they are growing most rapidly.”

This study aims to establish a new standard for the diagnosis of unclear diseases in dinosaur fossils and opens the door to more precise and more certain diagnoses. Establishing links between human disease and the diseases of the past will help scientists to gain a better understanding of the evolution and genetics of various diseases. Evidence of many other diseases that we share with dinosaurs and other extinct animals may yet be sitting in museum collections in need of re-examination using modern analytical techniques. Funding for David Evans was provided by an NSERC Discovery Grant, and research computers for 3D visualization were generously supported by The Dorothy Strelsin Foundation.