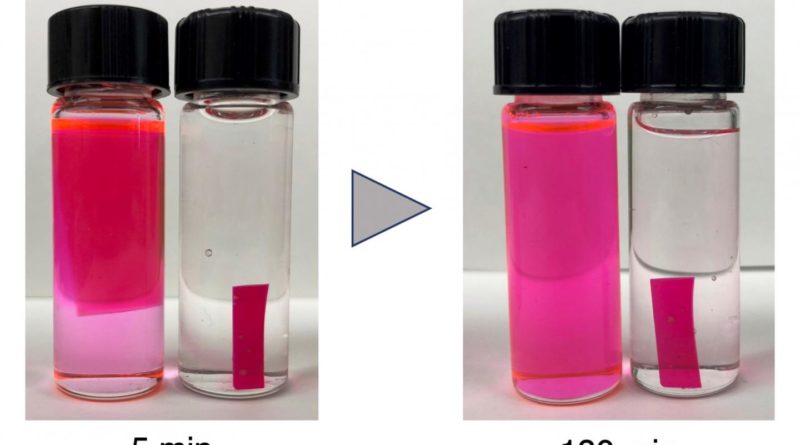 SAN DIEGO, Aug. 26, 2019 — Polyurethane waste is piling up in landfills, but scientists have a possible solution: They have developed a method to make polyurethane degradable. Once the original product’s useful life is over, the polymer can easily be dissolved into ingredients to make new products such as superglue. These polyurethanes could also be used in microscopic capsules that break open to release cargo such as biocides.

The researchers will present their results today at the American Chemical Society (ACS) Fall 2019 National Meeting & Exposition. ACS, the world’s largest scientific society, is holding the meeting here through Thursday. It features more than 9,500 presentations on a wide range of science topics.

“Millions of tons of polyurethanes are produced every day, and they’re widely used in foams, plastics, sneakers, insulation and other products,” says Ephraim Morado, a doctoral student who is presenting the work at the meeting. “But when people finish using them, these materials are usually discarded.” Waste polyurethane either ends up in landfills, or it’s incinerated, which requires a lot of energy and generates toxic byproducts, he notes. “As an alternative, we want to develop the next generation of polyurethane that can degrade easily and be reprocessed into a new material that can then be commercialized, such as adhesives or paint,” he says.

Of course, Morado isn’t alone in seeking ways to reuse polymers. “A lot of people interested in recycling are trying to make polymers that will break down into their original starting materials and then remake the same polymer,” says Steven Zimmerman, Ph.D., the project’s principal investigator. “We’re taking a very different, intermediate approach, which industry might be more interested in pursuing in the short term because it would be easier and cheaper,” adds Zimmerman, whose lab is based at the University of Illinois at Urbana-Champaign. “We’re trying to break our polymers down into some other starting materials that are familiar to industry.”

The key difference between standard polyurethane and Morado’s version is the incorporation of a hydroxy acetal as one of the monomers, alongside the traditional monomers. Zimmerman’s team had first used a special iodine-containing acetal to make degradable polymers and polyacrylamide gels. In that earlier work, the polymer could be dissolved in slightly acidic water.

Morado invented a new type of acetal to incorporate in his unconventional polyurethane so he could dissolve the polymer in the absence of water. After months of investigation, he discovered that a solution of trichloroacetic acid in dichloromethane, an organic solvent, could dissolve the polyurethane at room temperature in just three hours. That’s in contrast to the harsher conditions of the typical incineration method, which requires more than 1,400 F to avoid toxic gas formation. Unlike water, dichloromethane causes the material to swell. That expansion enables the acid to reach the backbone of polyurethane’s molecular chains, which it can break at positions where the acetal groups are located. Degradation releases alcohol monomers that can then be used to make new products such as adhesives whose performance rivals superglue.

Morado created other acetal-containing polyurethanes that can be triggered to degrade when exposed to light. He used these materials to make microcapsules that could contain herbicides or even biocides for killing barnacles and other creatures that stick to ship hulls. He and Zimmerman are also developing adhesives that dissolve when treated with a few drops of acid in dichloromethane solvent. One potential application is on circuit boards, where a chip that had been securely glued to the board could be swapped out for a replacement if the original chip had failed.

In addition, the team is working on polyurethanes that can degrade under even milder conditions, such as exposure to vinegar. That would be particularly useful for, say, degradable sutures or household applications such as removable picture hangers.


A press conference on this topic will be held Monday, Aug. 26, at 1 p.m. Pacific time in the San Diego Convention Center. Reporters may check-in at the press center, Room 14B, Mezzanine Level, or watch live on Youtube

Millions of tons of polyurethanes (PU) are produced every day for coatings, foams, and adhesives but due to the mass production of PU there is a buildup of PU waste in landfills and the aquatic environment. Disposal of PU waste involves incineration of PU, which requires a large energy input. Therefore, there is a need to develop milder methods to degrade PU. We present a simple hydroxy acetal unit that undergoes an intramolecular cyclization mechanism under anhydrous acidic conditions leading to a breakdown into smaller units. Incorporating this moiety as a monomer in a crosslinked PU network would allow the depolymerization of the polyacetal backbone and thus provide a new class of material with a distinct degradation mechanism. Herein, the hydroxy acetal unit is incorporated into bulk polymer and light triggered core shell microcapsules. A tetrahydroxy acetal is copolymerized with toluene diisocyanate to make foams that degrades efficiently under acidic conditions. Additionally, a diamino hydroxy acetal urethane monomer was synthesized for interfacial polymerization with trimesoyl chloride to obtain acid responsive microcapsules. We show that the hydroxy acetal monomer can degrade under mild conditions, which can possibly be utilized as a new PU material to aid in accumulation of PU waste.

This part of information is sourced from https://www.eurekalert.org/pub_releases/2019-08/acs-mpd072219.php