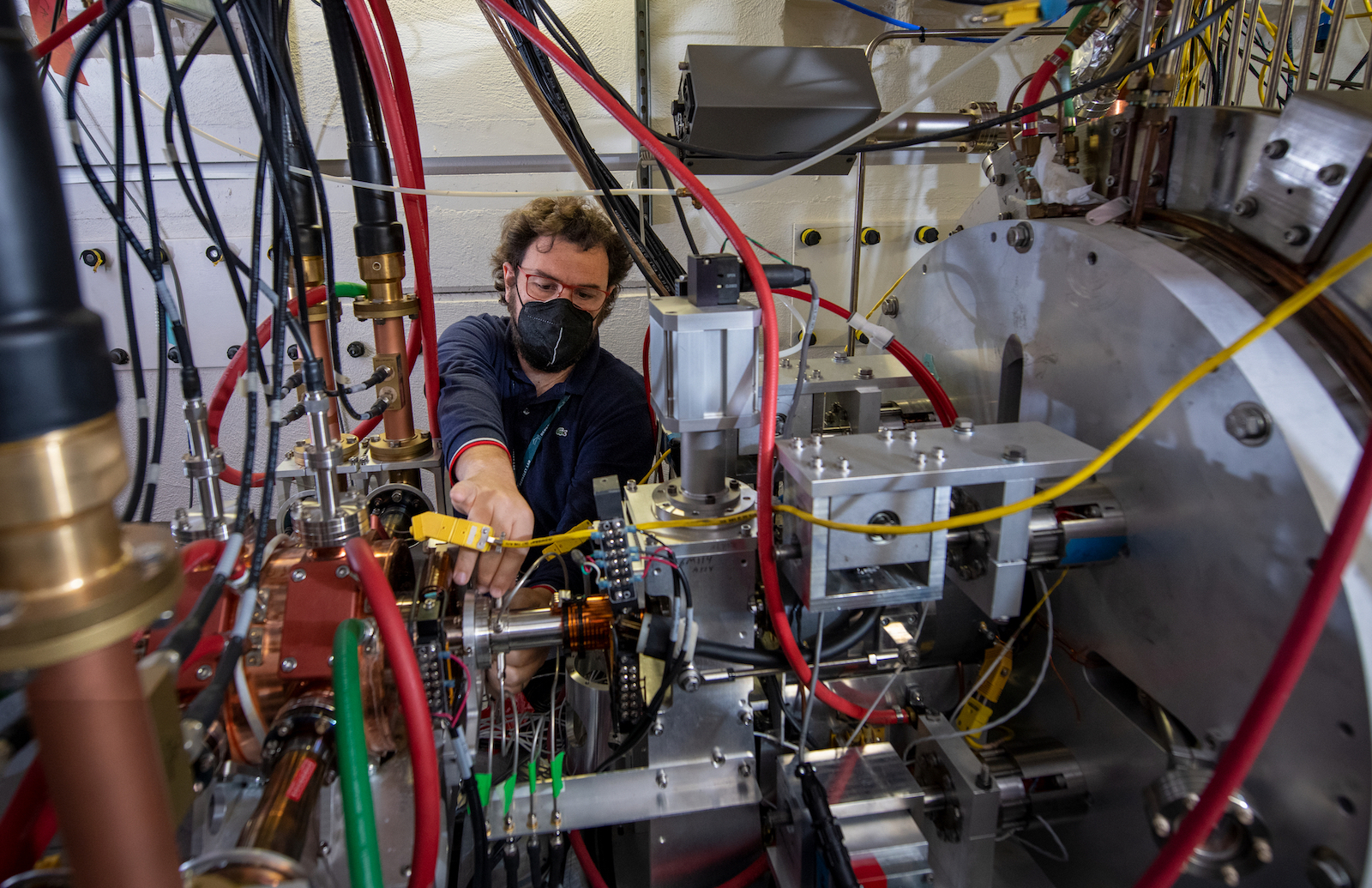 Scientists have developed a new machine-learning platform that makes the algorithms that control particle beams and lasers smarter than ever before. Their work could help lead to the development of new and improved particle accelerators that will help scientists unlock the secrets of the subatomic world.

Daniele Filippetto and colleagues at the Department of Energy’s Lawrence Berkeley National Laboratory (Berkeley Lab) developed the setup to automatically compensate for real-time changes to accelerator beams and other components, such as magnets. Their machine learning approach is also better than contemporary beam control systems at both understanding why things fail, and then using physics to formulate a response. A paper describing the research was published late last year in Nature Scientific Reports.

“We are trying to teach physics to a chip, while at the same time providing it with the wisdom and experience of a senior scientist operating the machine,” said Filippetto, a staff scientist at the Accelerator Technology & Applied Physics Division (ATAP) at Berkeley Lab and deputy director of the Berkeley Accelerator Controls and Instrumentation Program (BACI) program.

Their research also has the potential to impact multiple applied fields of particle accelerators, ranging from autonomous operations in industrial and medical settings to increased precision in scientific applications, such as linear colliders and ultrafast free electron lasers.

The novel technique was demonstrated at the High Repetition-Rate Electron Scattering Apparatus (HiRES) accelerator at Berkeley Lab in collaboration with researchers from Los Alamos National Laboratory and UCLA. The main application of the HiRES beamline is performing structural dynamics experiments on novel quantum materials. The instrument has contributed to numerous scientific discoveries such as performing the first-ever ultrafast electron diffraction studies of optical melting of tantalum ditelluride, a material with interesting and potentially useful properties. Now, this novel machine is showing its usefulness to develop new methods for controlling broad classes of accelerators.

Particle accelerators produce and accelerate beams of charged particles, such as electrons, protons, and ions, of atomic and subatomic size. As the machines become more powerful and complex, control and optimization of the particle or laser beam becomes more important to meet the needs of scientific, medical, and industrial applications.

Filippetto and colleagues at the BACI program are leading the global development of machine learning tools. These tools provide a platform to develop smart algorithms that react quickly and precisely to unforeseen perturbances, learn from their mistakes, and adopt the best strategy for reaching or maintaining the target beam setpoint.

The tools they are developing have the added advantage of providing an accurate model of the overall behavior of a particle accelerator system, no matter the complexity. Controllers can use these new and improved capabilities to make more effective real-time decisions.

The present focus of Filippetto’s work is using the power and prediction of machine learning tools to increase the overall stability of particle beams.

“If you can predict the beam properties with an accuracy that surpasses their fluctuations, you can then use the prediction to increase the performance of the accelerator,” he said. “Real time knowledge of key beam parameters would have an enormous impact on the final accuracy of experiments.”

At first, such an approach could seem unlikely to produce accurate results, similar to challenges with stock market behavior prediction, but early results from the group are promising. In fact, the algorithm used, which is based on neural network models, shows a tenfold increase in the precision of predicted beam parameters compared to typical statistical analysis. In related work, a recent Halbach award went to Simon Leemann, staff scientist in the Accelerator Physics Group in ATAP, and collaborators for developing machine learning control methods that improve the performance of the Advanced Light Source by stabilizing the highly relativistic electron beam at the experimental source points by roughly one order of magnitude, an unprecedented level.

In related research, Dan Wang, a research scientist in the BACI group who began her career at Berkeley Lab three years ago as a post-doctoral researcher, is using machine learning tools to advance the technology of control in complex laser systems. In Wang’s case the ultimate goal is to be able to precisely combine hundreds of ultra-intense laser pulses in one powerful and coherent beam the size of a human hair. In a coherent beam, the phase of each input laser must be controlled within a few degrees of error, which is very challenging.  The laser energy can be combined in different ways but in all cases, it is imperative that the coherence of the beam array be stabilized against environmental perturbations such as thermal drift, air fluctuations, or even the movement of the supporting table.

To do this, Wang and her colleagues developed a neural network model that is 10 times faster at correcting for system errors  in the combined laser array than other conventional methods. The model they developed is also capable of teaching the system to recognize phase errors and parameter change in the lasers and to autocorrect for perturbations when they occur.

The researchers’ method works in both simulations and experiments in lasers, where unprecedented control performance was achieved. The next step in the research is to implement machine learning models on edge computers such as field programmable gate arrays (FPGAs) for faster response, and also to demonstrate the generalization of this machine-learning based control method in more complex systems where there are far more variables to account for.

“I come from an accelerator background, but during my post-doc, my colleagues really helped me to embrace the power of machine learning,” Wang said. “What I’ve learned is that machine learning is a powerful tool to solve a lot of different problems, but you always have to use your physics to guide in how you use and apply it.”

“To meet the needs of new science, this work exemplifies active feedback and machine learning methods that are crucial enablers for the next generation of accelerator and laser performance to power new photon sources and future particle colliders,” said Cameron Geddes, director of the Accelerator Technology & Applied Physics Division.

Founded in 1931 on the belief that the biggest scientific challenges are best addressed by teams, Lawrence Berkeley National Laboratory and its scientists have been recognized with 14 Nobel Prizes. Today, Berkeley Lab researchers develop sustainable energy and environmental solutions, create useful new materials, advance the frontiers of computing, and probe the mysteries of life, matter, and the universe. Scientists from around the world rely on the Lab’s facilities for their own discovery science. Berkeley Lab is a multiprogram national laboratory, managed by the University of California for the U.S. Department of Energy’s Office of Science.

Risk of SARS-CoV-2 infection during the Omicron surge in patients on dialysis: The role of antibody responses and vaccine doses