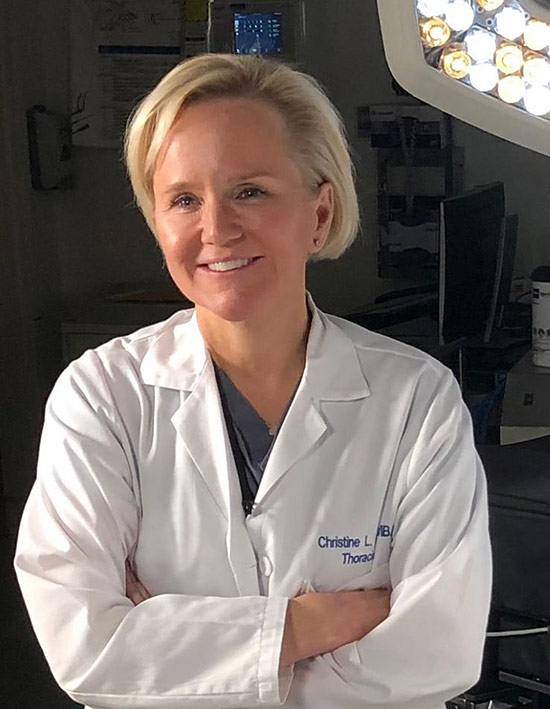 University of Maryland School of Medicine (UMSOM) Dean, E. Albert Reece, MD, PhD, MBA, today announced that Christine Lau, MD, MBA, the George Minor Professor of Surgery and Chief of the Division of Thoracic Surgery at the University of Virginia (UVA), will become the next Chair of the Department of Surgery at UMSOM, and the Chief of Surgery at the University of Maryland Medical Center (UMMC). She will begin her new position on a full-time basis December 1, 2019. Dr. Lau is a nationally renowned thoracic and lung transplant surgeon who is widely regarded for her leadership in the field of thoracic surgery. She is a federally funded scientist and an expert clinician who is widely-acclaimed for her work in improving outcomes for lung transplant patients.

Dr. Lau’s selection followed an extensive nationwide search in which nearly 100 candidates were nominated for this coveted position, and she was eventually selected as the top candidate. This appointment makes Dr. Lau the first woman to chair the Department of Surgery at the UMSOM, since its early beginnings in the 1800s. It also makes her one of only a small number of women throughout the U.S. to lead a major department of surgery.

“We are delighted that Dr. Lau will be the next chair of our excellent and nationally acclaimed Department of Surgery. She is ideally qualified to lead the department to new and even greater heights,” said Dr. Reece who is also Executive Vice President for Medical Affairs, UMB, and the John Z. and Akiko K. Bowers Distinguished Professor. “She has been a true pioneer in the field of lung transplantation, and the School of Medicine and the Medical Center will continue their upward trajectory resulting from her strong record of academic and clinical leadership, as well as her scholarly excellence and management experience.”

Mohan Suntha, MD, MBA, President and CEO of UMMC, added: “Dr. Lau brings a stellar record of clinical and research accomplishments to our already outstanding Department of Surgery. Her demonstrated commitment to excellence in patient care, as well as to driving innovation and discovery, bode well for the future of the department. We are truly excited that she will be assuming this important leadership role.”

Rajabrata Sarkar, MD, PhD, the Barbara Baur Dunlap Professor in Surgery, Vice Chair for Clinical Operations in the Department of Surgery, and Head of the Division of Vascular Surgery, served as Interim Chair of the Department during the past year and a half.

“We are deeply grateful to Dr. Sarkar for his outstanding transitional leadership during this important period for the Department,” Dean Reece added. “We look forward to his continuing contributions to the Department and the SOM as one of the preeminent vascular surgeons in the nation.”

Dr. Lau will lead the UMSOM Department of Surgery, which has a long and rich history dating back to the start of the school in 1807. In its early days, UMSOM was the first medical school in the country to perform several surgical procedures that have since become routine. For the past 50 years, the Department of Surgery, in collaboration with other departments including Internal Medicine and Anesthesiology, has been an international leader in multi-organ transplantation, cardio-thoracic surgery, trauma and critical care, cancer care, and other major surgical programs. The department remains widely regarded for groundbreaking research in basic, translational, and clinical science.

“I am beyond thrilled to be joining such a talented team of surgeons and individuals,” said Dr. Lau. “While I never saw myself leaving UVA, the opportunity to influence the future direction of surgery at the University of Maryland is simply something that I wanted to be a part of!”

Dr. Lau will continue her federally funded research program in her new position. She brings with her a multi-year $3.3 million grant from the National Institutes of Health (NIH) to investigate the use of a new therapy to prevent ischemia-reperfusion injury in lung transplant recipients.

This past May, she and her colleagues presented findings from the NIH-funded trial at the American Association for Thoracic Surgery Annual Meeting. The trial demonstrated for the first time, the safety of Regadenoson (an adenosine 2A receptor agonist) for use in human lung transplant patients to potentially prevent ischemia-reperfusion injury, which contributes to the less than optimal survival rates in lung transplant recipients. Adenosine 2AR agonists like Regadenoson, which is used in cardiac stress testing, offer a potentially novel treatment for this common inflammatory complication where none exists today.

At UVA, Dr. Lau helped to build the lung transplant program to be among the best in the nation for patient outcomes during her time as the Director of Lung Transplantation. Her research, which she will continue at UMSOM, has added significant advances in areas that include lung injury and inflammation.

Dr. Lau specializes in all aspects of general thoracic surgery, and she is board certified in both general surgery and thoracic surgery. She has been consistently named a Top Doctor in America by Newsweek and other publications. She currently serves as Director of the American Board of Thoracic Surgery, and serves on the Board for the American Association for Thoracic Surgeons. In addition, she serves on the expert panel for Leap Frog, a national nonprofit organization that collects and reports on hospital performance, and she serves on the National Heart, Lung, and Blood Institute (NHLBI) Study Section for Anesthesiology and Trauma Research.

She received her medical degree from Dartmouth Medical School in Hanover, NH, graduating #1 in her medical school class.  She garnered numerous awards while she was there, including being elected to the National Medical Honor Society and receiving the Janet M. Glasgow Memorial Award. She subsequently did her internship and residency in general surgery at Duke University Medical Center in Durham, NC. After completing training in general surgery, she went to Washington University in St. Louis for her fellowship in cardiothoracic surgery and also in lung transplantation, which she finished in 2005. She earned an MBA in 2012 from UVA’s Darden School of Business with a focus on management and leadership development.

Dr. Lau has authored and coauthored more than 140 articles in leading publications such as the Journal of Thoracic & Cardiovascular Surgery, Annals of Thoracic Surgery, the American Journal of Respiratory & Critical Care Medicine and the American Journal of Transplantation. She has also written or contributed chapters to 35 medical textbooks on her specialty interests which include lung cancer, esophageal cancer, mediastinal diseases, lung volume reduction, laparoscopic surgery, and lung transplantation.

Dean Reece, working in collaboration with UMMC President and CEO Dr. Suntha and University of Maryland, Baltimore President Dr. Jay Perman, launched a campus-wide Culture Transformation Initiative, a long-term program dedicated to ensuring a professional, respectful and inclusive work environment for all. Dr. Lau is strongly committed to embracing this initiative, and extending its reach across the Department of Surgery and beyond.

About the University of Maryland School of Medicine

Now in its third century, the University of Maryland School of Medicine was chartered in 1807 as the first public medical school in the United States. It continues today as one of the fastest growing, top-tier biomedical research enterprises in the world, with 43 academic departments, centers, institutes, and programs. The School of Medicne has a faculty of more than 3,000 physicians, scientists, and allied health professionals, including members of the National Academy of Medicine and the National Academy of Sciences, and a distinguished recipient of the Albert E. Lasker Award in Medical Research. With an operating budget of more than $1.2 billion, the School of Medicine works closely in partnership with the University of Maryland Medical Center and Medical System to provide research-intensive, academic and clinically based care for more than 1.2 million patients each year. The School has over 2,500 students, residents, and fellows, and nearly $575 million in extramural funding, with most of its academic departments highly ranked among all medical schools in the nation in research funding. As one of the seven professional schools that make up the University of Maryland, Baltimore campus, the School of Medicine has a total workforce of nearly 7,000 individuals. The combined School and Medical System (“University of Maryland Medicine”) has an annual budget of over $6 billion and an economic impact of more than $15 billion on the state and local community. The School of Medicine faculty, which ranks as the 8th highest among public medical schools in research productivity, is an innovator in translational medicine, with 600 active patents and 24 start-up companies. The School works locally, nationally, and globally, with research and treatment facilities in 36 countries around the world. Visit medschool.umaryland.edu

About the University of Maryland Medical Center