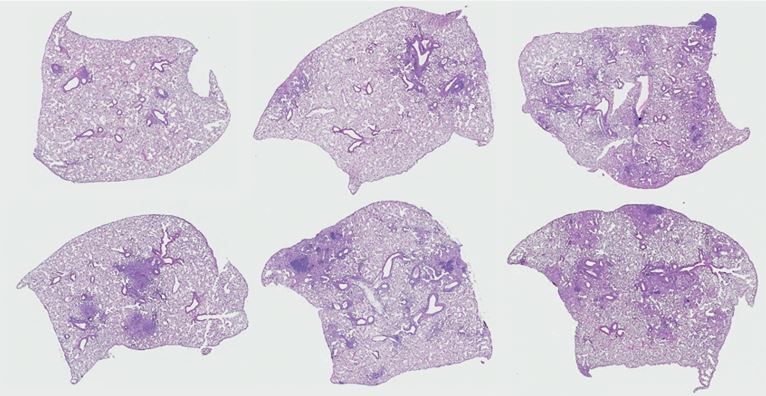 San Antonio, Texas (August 7, 2019) – Old lungs are not as capable as young lungs of fighting off an infection of the bacteria that causes tuberculosis (TB), placing seniors at a greater risk of developing TB. The microbe that causes this infectious disease, Mycobacterium tuberculosis (Mtb), currently kills more people in the world than any other pathogen.

“Things go wrong as we get older,” said Professor Joanne Turner, Ph.D., Vice President for Research. “When we’re younger, we have control mechanisms in place, and our body will switch on responses and switch off responses as needed. As we get older, some of those responses become defective.”

Texas Biomed researchers published an article in the Journal of Infectious Diseases in July 2019. The study details an experiment that took place in vitro (in the lab) and in vivo (in animals) that showed fluid in the lining of the lungs plays a big role in the elderly’s susceptibility to infection with the bacterium Mtb.

The team studied the role of the lung mucosa (a.k.a., alveolar lining fluid), which is the layer of liquid in the lungs that assists in gas exchange and also plays a protective role against infection. Those samples were acquired from volunteers who underwent a bronchoalveolar lavage, a medical procedure in which a bronchoscope is passed through the mouth or nose into the lungs and fluid is squirted into a small part of the lung and then collected for examination. Half of the donor volunteers were from San Antonio; the other half were from Ohio. In San Antonio, Texas Biomed researchers are collaborating with the Pulmonary and Critical Care Medicine Division at UT Health San Antonio, Drs. Jay Peters and Diego Maselli Caceres.

When the same experiment was conducted in vivo in healthy young mice, results recapitulated what happened in the in vitro experiment. The animals that received Mtb that had been incubated in lung lining fluid from older humans could not control the infection as well as animals that received Mtb incubated with lung lining fluid from a younger person.

“We hypothesized that the status of the lung mucosa may partially explain why we are susceptible to respiratory infectious diseases as we age,” explained Professor Jordi Torrelles, Ph.D., Co-lead of the Population Health program at Texas Biomed. “Elderly individuals (65 and older) have higher degree of oxidation in their lung mucosa. In our study we demonstrated that this oxidation alters the normal function of important lung mucosa innate soluble components involved in the control of infectious agents reaching our lungs. With this control impaired as we age, we are more susceptible to respiratory infections. We are currently collaborating with Southwest Research Institute investigators (Drs. Hong Dixon and Varsin Archer) to establish if reversal of the oxidative status of the lung mucosa in the elderly could make us resistant to respiratory infections.”

Scientists will be looking at ways to intervene in this process to make these molecules in the lungs of elderly people more functional.

“The most exciting thing this study tells us is that the very first interaction between a pathogen and the fluid in the lung can dictate long term outcome,” Dr. Turner said. “You could perform lots of interventions throughout the entire infection period. But if you change that first interaction, you could potentially dictate whether that person develops active TB, controls it better or even clears it.”

Texas Biomed is one of the world’s leading independent biomedical research institutions dedicated to advancing health worldwide through innovative biomedical research. The Institute is home to the Southwest National Primate Research Center (SNPRC) and provides broad services in primate research. SNPRC contributes to a national network of National Primate Research Centers (NPRCs) with specialized technologies, capabilities and primate resources, many of which are unique to the SNPRC. The Center also serves investigators around the globe with research and technical procedures for collaborative projects. For more information on Texas Biomed, go to www.TxBiomed.org or for more information on SNPRC, visit www.SNPRC.org.