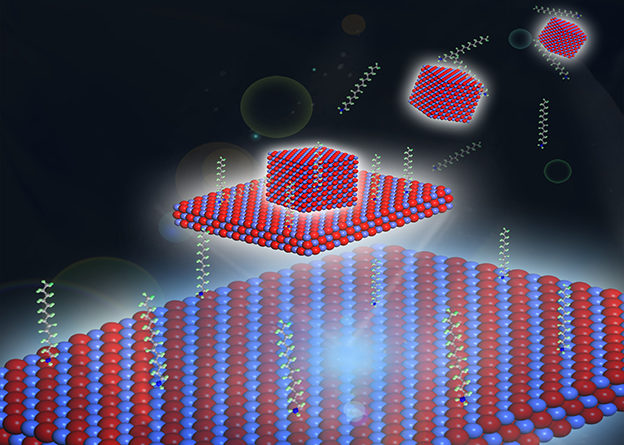 Ever since its discovery in 2004, graphene – an atomically thin material with amazing strength and electrical properties – has inspired scientists around the world to design new 2D materials to serve a broad range of applications, from renewable energy and catalysts to microelectronics.

Using a liquid-phase transmission electron microscope (TEM) at Berkeley Lab’s Molecular Foundry for the experiments, co-corresponding author Haimei Zheng and her team directly observed the dynamic growth of cobalt oxide nanoparticles in a solution, and their subsequent transformation into a flat 2D nanosheet.

“Such a 3D to 2D transformation is much like the white of an egg spreading as it fries in a pan,” said Zheng, a senior staff scientist in Berkeley Lab’s Materials Sciences Division who led the study.

“And it’s the balance between these two energies, one negative and one positive, which determines the shape change,” Wang said. For smaller nanoparticles, positive edge energy wins, which leads to a compact 3D shape. But when the cobalt oxide nanoparticles grow larger, they ultimately reach a critical point where negative surface energy wins, resulting in a 2D nanosheet, he explained. Wang, a senior staff scientist in Berkeley Lab’s Materials Sciences Division, performed the calculations for the study on supercomputers at Berkeley Lab’s National Energy Research Scientific Computing Center (NERSC).

Uncovering these growth pathways, including the 3D-to-2D transition, Zheng added, provides new opportunities for the streamlined design of exotic new materials from compounds whose irregular atomic structures, such as transition metal oxides, are more challenging than graphene to synthesize into multilayered 2D devices.

Zheng and her team concluded that the study could not have been possible with a conventional electron microscope. By using liquid-phase TEM at the Molecular Foundry, the researchers were able to study the growth of atomically thin materials in solution by encapsulating the liquid sample in a specially designed liquid cell. The cell prevented the sample from collapsing in the high vacuum of the electron microscope.

“It would be impossible to know such a growth path without this in situ observation,” said first author Juan Yang, who was a visiting doctoral researcher at Berkeley Lab from Dalian University of Technology of China at the time of the study. “This discovery may transform our future design of materials with surface-enhanced properties for catalysis and sensing applications of the future.”

The researchers next plan to focus on using liquid-cell TEM to grow more complex 2D materials such as heterostructures, which are like sandwiches of layered materials with different properties.

“Like an architect who is inspired by the way in which an ancient giant redwood has grown, materials scientists are inspired to design ever more complex structures for energy storage,” said Zheng, who pioneered liquid-cell TEM at Berkeley Lab in 2009. “But why do they grow that way? Our strength at Berkeley Lab is that we can study them at the atomic level and watch them grow in real time and figure out the mechanisms that would contribute to the design of better materials.”