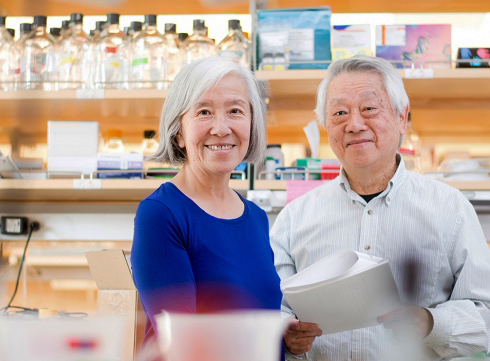 CHAPEL HILL, NC – December 10, 2019 – The UNC School of Medicine has awarded the 20th Perl-UNC Neuroscience Prize to Lily Jan, PhD, and Yuh-Nung Jan, PhD, both at UC San Francisco, for the “discovery and functional characterization of potassium channels.”

Lily and Yuh-Nung Jan are the Jack and DeLoris Lange Professor of Physiology and Biophysics and Jack and DeLoris Lange Professor of Molecular Physiology, respectively, at UC San Francisco, where they are co-principal investigators of the Jan Lab. They are also both Howard Hughes Medical Institute investigators and members of the Kavli Institute for Fundamental Neuroscience at UCSF and the UCSF Weill Institute for Neurosciences.

Their research centers on the development and function of the nervous system, including the mechanisms of dendrite development, sensory physiology, axon and dendrite regeneration, the function and regulation of potassium and calcium activated chloride channels, and how dendritic morphogenesis and channel modulation contribute to the assembly and shape of functional neuronal circuits.

Potassium channels control the flow of electrical signals in the brain and nervous system, and they are implicated in conditions ranging from epilepsy to hypertension. When the Jans began their work, potassium channels could only be detected indirectly through their electrical effects. In 1987, after nearly a decade of work, the Jans were the first to clone a gene known as Shaker, which is responsible for encoding a potassium channel membrane protein in fruit flies.

They have authored hundreds of scientific papers and mentored more than 150 of future scientists over four decades.

“I have long been impressed with the quality and caliber of research from Drs. Lily and Yuh-Nung Jan,” said Mark Zylka, PhD, chair of the Perl-UNC Neuroscience Prize committee and director of the UNC Neuroscience Center. “In fact, as I was finishing graduate school, I had the good fortune of traveling to San Francisco and meeting them in person. At the time, they had already made many insightful discoveries, and since then their labs have continued to provide many important scientific contributions to our field.”

The Jans have received numerous awards over the course of their careers, including the 2017 Vilcek Prize, honoring the contributions of immigrants to the biomedical sciences. The Jans came to the United States from Taiwan as graduate students at Caltech in 1968. After postdoctoral training at Caltech and Harvard Medical School, they joined UCSF in 1979.

“We are honored to receive this prestigious award, and we are thrilled to join the impressive group of illustrious awardees of the Perl-UNC Neuroscience Prize,” Lily Jan said. “This recognition is very much to the credit of our former and current students and postdoctoral fellows whose dedication and scientific insights are instrumental for the contributions made by the Jan lab.”

Yuh-Nung Jan added, “We are both deeply indebted to our mentors, Drs. Max Delbrück, Seymour Benzer and Steve Kuffler, who all greatly influenced us as scientists. It was in Seymour’s Drosophila neurogenetics lab, we started using Drosophila to study fundamental problems in neurobiology, a fruitful and enjoyable approach that we have continued to this day.”

The Perl-UNC Neuroscience Prize, established in 2000, is named after former UNC professor Edward Perl, MD, who discovered that a specific type of sensory neuron responded to painful stimuli. Before this, scientists thought that sensory neurons responded to all stimuli and that pain responses were sorted out in the spinal cord. The discovery had a major impact on the field of pain research, particularly in the development of pain medications.

Dr. Perl passed away in 2014. Read more about his research in this remembrance.