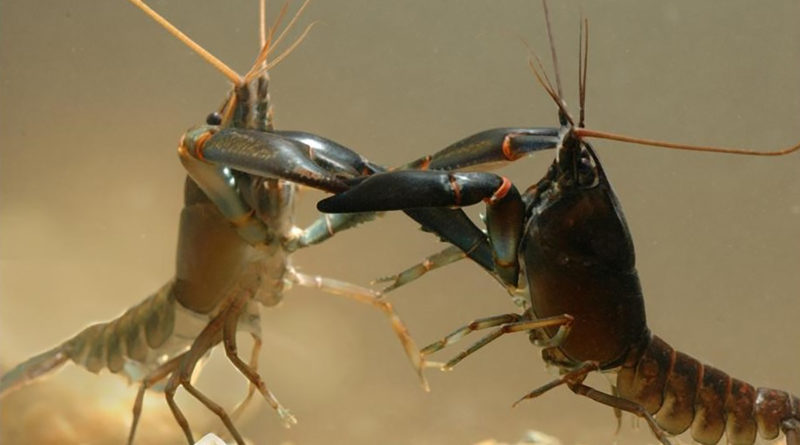 I could do that abstract painting.

I could take that guy.

Self-deception like this seems very human. Now, thanks to a recent study led by an Arizona State University biologist, for the first time we know that it happens in the animal kingdom, too.

Crayfish are some of the most aggressive creatures on earth. They fight with big claws capable of doing real damage. But sometimes there’s not much muscle under the bravado.

“What males are doing is making as little crappy muscle as possible, which is energetically saving,” said Michael Angilletta, a biology professor in the School of Life Sciences.

It’s like buying designer knockoffs. You save a lot of money, and most people can’t tell the difference. In the case of crayfish, you make a big claw without much muscle, and you put crappy muscle on it to boot. Everyone sees you wave your big claw and they presume that you’re a powerful crayfish.

“Since they signal to each other before fighting, this is a way they can convince someone to back down without fighting,” Angilletta said. “Importantly, this only works if there’s enough crayfish out there that have big claws that are actually strong. If you accidentally fight one of those and call a bluff, you’re going to lose a claw.”

In the crayfish world, losing a claw is a disaster: It takes up to two years for a claw to regenerate. In the meantime, no one is mating with anyone who has a puny claw.

Angilletta and his co-authors have been studying self-deception in crayfish for about 10 years. In 2006 they accidentally discovered that many crayfish with big claws were quite weak. There was about a tenfold variation.

“You would go, ‘Oh, this (pinch) is going to hurt,’ but it doesn’t hurt at all,” Angilletta said. “The question is are they not trying, or are they really not strong? And it’s repeatable from day after day with the same individuals.”

They combined mathematical modeling with an experiment to show that crayfish meet the criteria for self-deception. This approach opens up the possibility of studying self-deception in nonhuman animals, without being able to talk to them. They used 97 adult males, staging fights between 20 select crayfish and 77 opponents.

“How do we know what a crayfish would do if it knows whether it’s weak or it’s strong?” Angilletta asked. “If it knows that (it has a weak claw), it should actually be less aggressive.”

It might escalate up to the point of a fight, and then run away. The probability that a crayfish engaged in a fight depended on two factors: the relative size of its claws and the expected difference in force. How do they know how strong (or not) they are? Crayfish use claws to deter predators, defend territory and capture prey. They have a pretty good idea of how strong their own claws are. They’re also skilled at assessing their size versus an opponent’s. They can even recognize previous opponents.

“In our population of crayfish, deceptive signalers largely ignored their own strength when escalating or evading aggression,” Angilletta said. “If this benefit of heightened aggression outweighs any long-term cost, natural selection should favor individuals who escalate aggression through self-deception.”

In other words, they buy into their own bluff. Angilletta teaches a biology course on human behavior called “Why people steal, cheat, and lie,” which explores the ecological and evolutionary causes of selfishness and cooperation in human societies.

“What’s new about this study is that if you’re ever in a situation where I’m lying to you, there’s also a possibility I’m selling my lie exceptionally well because I’ve convinced myself that it’s true,” he said. “That’s because of self-deception. It’s very common in psychology but it’s not really that much in biology because we’re usually thinking about nonhuman animals and we don’t know what they’re thinking. We have a hard time understanding what they know and don’t know.”

The paper was published last summer in Behavioral Ecology.

Arizona State University has developed a new model for the American Research University, creating an institution that is committed to access, excellence and impact. ASU measures itself by those it includes, not by those it excludes. As the prototype for a New American University, ASU pursues research that contributes to the public good, and ASU assumes major responsibility for the economic, social and cultural vitality of the communities that surround it.