Learning from the Recovered

Samples from those who had COVID-19 could illuminate true infection rate, lethality, vaccines 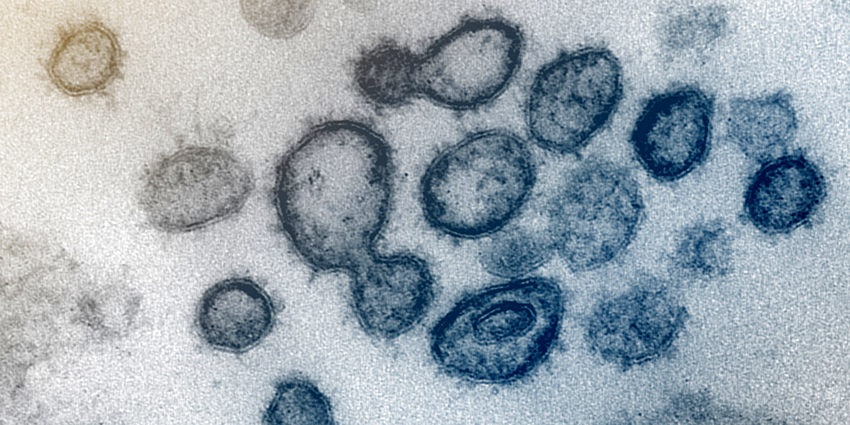 Researchers at Harvard Medical School and at Brigham and Women’s Hospital are adapting an antibody-detection tool to study the aftermath of infections by the novel coronavirus that is causing the current global pandemic.

The tool, called VirScan, detects antibodies in people’s blood that indicate active and past infections by viruses and bacteria. It was developed in 2015 by Stephen Elledge, the Gregor Mendel Professor of Genetics and of Medicine at HMS and Brigham and Women’s, and two PhD candidates in the lab, George Xu and Tomasz Kula.

Because it takes 5 to 10 days for a person to develop antibodies, Elledge emphasized that VirScan would not be used to provide real-time diagnoses of infection with SARS-CoV-2, the virus that causes COVID-19.

Rather, the goal is to analyze blood samples from people who recover from infection to learn about how the virus affects the immune system and the epidemiology of the disease.

Once underway, the effort will join others around the world attempting to study post-infection blood samples. The results could lead to better estimates of true infection and lethality rates by capturing cases that may have gone undetected and could inform the development of vaccines. They could also reveal new insights into the fundamentals of human immunity.

“The situation right now is extremely difficult, but it’s great to be in a position to apply all these new methods to an important human health problem,” said Elledge.

How does VirScan work? How is it different from diagnostic tests?

From a single drop of blood, VirScan tests for antibodies against more than 1,000 different strains of viruses and bacteria that may have infected a person, whether around the time of testing or decades earlier. This differs from typical blood tests known as ELISA assays, which look for one pathogen at a time.

It also differs from the tests currently used to diagnose COVID-19. Those tests rely on mucus swabs from the nose and throat and look for nucleic acids that signal that the SARS-CoV-2 virus is contained in the sample.

“The CDC and other testing facilities are looking for the presence of the virus, which is critical,” said Elledge. “Our assay can detect whether someone’s immune system has engaged the virus. We can tell when someone has harbored the virus but doesn’t have it anymore.”

To create VirScan, Elledge, Kula and Xu built a library of epitopes: short protein fragments derived from the surfaces of viruses. If a person has encountered a particular viral strain, their immune system has generated antibodies against it. Those antibodies will then recognize the epitope in the VirScan library and bind to it, giving a positive result.

Can VirScan be used to test whether people currently have COVID-19?

For several reasons, including the fact that it takes at least a week to generate results, VirScan can’t be used as a real-time diagnostic test.

“It’s not feasible as a point-of-care test,” said Elledge. However, he added that his team might be able to use the information gained to generate a faster version of VirScan.

When the project gets up and running, it will be critical to ensure that blood samples are taken only from people who have recovered fully from SARS-CoV-2 infections, so that vials do not contain active coronavirus particles when they enter the lab.

“We don’t want to infect our researchers,” said Elledge.

How can the work improve estimates of infection and fatality rates?

So far, limited testing has meant that an unknown number of people in the U.S. and beyond have been infected with SARS-CoV-2 but remain uncounted. Some may not have had symptoms. Some symptoms may have been attributed to other causes. This not only leaves individuals wondering about their infection and immunity status but also obscures the true infection rate across the population. And without knowing how many people have been infected, it’s impossible to calculate the fatality rate—how likely the new coronavirus is to kill a person it infects.

Running VirScan analyses on blood, or serum, from a sizeable segment of the population can provide “a reliable estimate” of how many people were infected in a given geographic area, said Elledge. Cross-referenced with medical records of those who tested positive and died, that information can illuminate the virus’s true lethality rate.

“Because right now they say, ‘this many people came in and tested positive,’ and ‘this many died,’ but if there are a lot of people who are not sick enough to go to the hospital and who don’t get tested, it makes the virus look more lethal than it might be,” said Elledge.

How can VirScan inform vaccine development?

VirScan promises to help Elledge and colleagues identify which parts of the virus the immune system responds to.

Recent work from his group suggests that people all over world infected with a particular virus make antibodies against the same proteins—”even the same amino acids”—on that virus, Elledge said.

That’s surprising, considering how many epitopes viruses have and how many antibodies are in the body’s arsenal, said Elledge. The findings led him to suspect that some epitopes are, in effect, decoys, and therefore, that not all antibodies have the desired neutralizing effect.

“The immune system may be sending out all these antibodies like shooting a shotgun and hoping some of the spray will hit the target, neutralizing some critical part of the virus,” he said.

In principle, said Elledge, VirScan could indicate which epitopes are useful targets against the  new coronavirus and which are just noise. Then researchers could eliminate the useless ones from vaccines they’re developing.

How else is the lab working to assist vaccine efforts?

Antibodies aren’t the only objects in the body that attack invaders. Immune cells called T cells also react to specific epitopes—not on viruses, but on the surfaces of infected cells. Alerted to danger by these epitopes, T cells can kill virus-infected cells and limit the number of viruses made in the body.

In 2005, Elledge’s lab built a tool, T-Scan, that can detect these epitopes. He would now like to teach T-Scan to detect the epitopes made when cells are infected by the new coronavirus. But since cells infected by different viruses and bacteria sprout different epitopes, he first needs to know what the epitopes look like for infections with this coronavirus. That would require obtaining not only blood but also T cells from people who recover from SARS-CoV-2 infection, he said.

The goal: to identify the epitopes that trigger T-cell attacks so researchers laboring to develop COVID-19 vaccines can include them in the mix.

“T-cell epitopes are often important players in vaccines and in preventing viral infections,” said Elledge. “You want to encourage T cells to kill the infected cells.”

How can VirScan illuminate what SARS-CoV-2 does to the immune system?

Last year, the team used VirScan to help reveal how measles infection wipes out the immune system’s memory of past infections by other viruses and bacteria. VirScan could similarly illuminate whether people develop immunity to the new coronavirus, how long they remain immune and whether infection causes more widespread damage to the immune system like measles does.

Or the virus may have other surprises in store, said Elledge.

What about the likelihood that there are different strains of the new coronavirus?

Although many mutations in the virus have been documented around the world to date, these variations “wouldn’t affect antibodies much,” so VirScan’s results should still apply, said Elledge.

Whose samples would be analyzed?

For the initial study, Elledge envisions collecting samples from about 100 volunteers who’ve recovered from COVID-19. The best-case scenario would be having samples from people before and after infection, he said, although he recognizes that that would be hard to arrange.

“Many people in the lab have given samples in the past, so if anyone gets sick, we’ll have a before and after, but of course we hope that doesn’t happen,” he said.

When will all of this be ready?

Most HMS labs have transitioned to remote work following institutional guidance aimed at containing the spread of the virus, but some have been granted permission to continue on-site work for COVID-19-related projects, including a portion of Elledge’s lab.

Elledge anticipates that VirScan could be deployed to analyze samples in mid-April. Then it would be a matter of obtaining institutional review board approvals for human research and arranging the logistics of collecting the samples. Elledge is currently in talks with contacts across the HMS and broader Boston communities.

What else is in the works?

At the same time, Elledge’s team is working to detect antibodies against the new coronavirus with even greater sensitivity using a tool they developed in 2014 called PLATO. Whereas VirScan uses short, linear protein fragments, PLATO uses full-length proteins known as open reading frames, or ORFs, which have a more developed 3D structure. (PLATO stands for ParalleL Analysis of Translated ORFs.)

Who is funding this work?

Elledge is an investigator of the Howard Hughes Medical Institute.