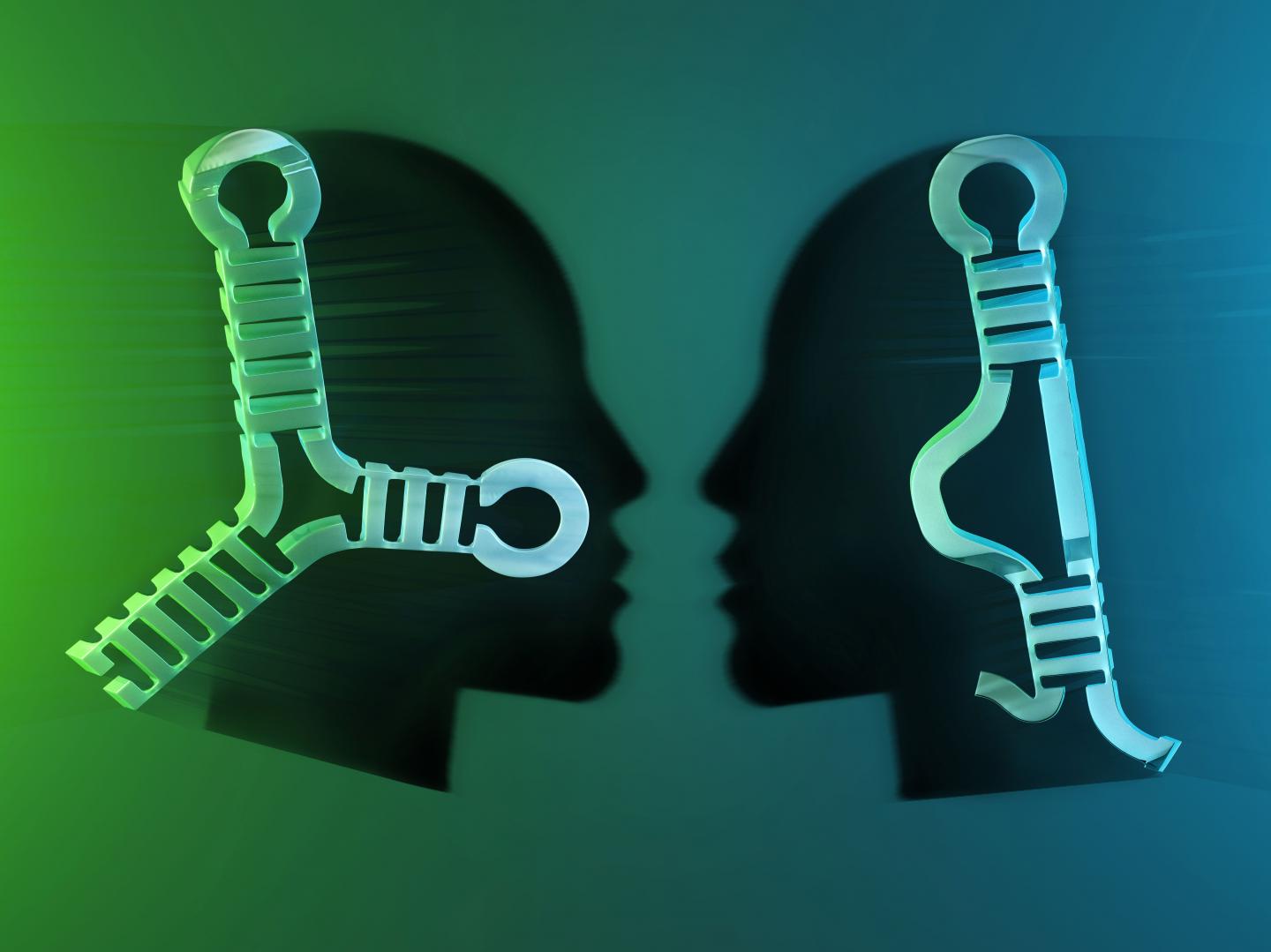 Human cells – like those of many other organisms – have developed mechanisms to protect us from cancer. Healthy cells produce a suite of molecules that stop harmful mutations from accumulating. The most famous guardian of our genome is the protein p53: whenever p53 becomes inactive or is malfunctioning, the risk of developing cancer increases sharply. MEG3, which has been studied in detail by Marco Marcia and his group at EMBL Grenoble, is another cancer-preventing molecule that our cells produce. Its function arises from stimulating p53. However, unlike p53, MEG3 is not a protein and belongs to a class of RNA molecules discovered within the last 20 years, called long non-coding RNAs; lncRNAs for short.

While human cells likely contain more lncRNAs than proteins, the biological importance and mechanisms of action of these RNAs remain largely obscure. Some lncRNAs, like MEG3, are linked to diseases, but scientists have not been able to decipher how they work exactly. This has triggered scepticism among some researchers in the field, says Marcia: “Because of the lack of molecular understanding of how lncRNAs work, many scientists still question the actual functional relevance of these molecules.”

Why shape and function are interlinked

Marcia’s aim was to change this perception, by studying the three-dimensional shape of lncRNAs. He and his group hope that knowing more about lncRNA structures will help to understand how these molecules function.

“3D structures provide the molecular map, the molecular cartography of biological molecules. When one visits a new city, one wants to know where the railway station is, where the city hall, the schools, the parks are, because those are the elements of the city that make it function properly. The same is true for biomolecules: you want to know how they are folded and structured so that you can identify their functional units,” says Marcia.

Using biochemistry, cell biology and single-particle atomic force microscopy, the team studied the structure of MEG3 in great detail. The group systematically removed and modified the building blocks of MEG3, to find out which of them are essential for its functionality. This way, the researchers discovered two elements inside the molecule that are more important for its function as a tumour suppressor than others. Interestingly, these elements form hairpin structures, which biologists call ‘kissing loops’, that interact with each other in three dimensions.

When these kissing loops were disrupted by manipulating the building blocks of MEG3, the tumour suppression function of MEG3 was also disrupted. The findings of the group might have wider implications, explains Marcia: “The fact that the 3D structure of lncRNAs is important sheds new light on these molecules. It shows that lncRNA molecules are much more sophisticated than we thought, because they need to be controlled and folded very precisely to work properly.”

MEG3 is abundant in different mammalian tissues, particularly the brain and endocrine glands like the pituitary gland. Tumours in the brain and the pituitary gland can develop when MEG3 is not working properly. To date, these types of tumours can only be treated by surgery. One way of overcoming the need for invasive surgery would be to stimulate MEG3 activity in the tumour.

Designing drugs that stabilise the MEG3 kissing loops might improve its tumour suppressor function to the point where it can arrest tumour growth. Knowledge about the composition of healthy MEG3 might also help to identify people with abnormally folded MEG3 who are at higher risk of developing cancer.

The unsolved mysteries around MEG3 and other lncRNAs

Despite their meticulous work, the group has not solved the whole puzzle surrounding MEG3, emphasises Marcia: “We still need to discover the precise order of events that lead to MEG3-dependent activation and stimulation of p53.”

The results provided in this new paper, which also includes contributions from colleagues at the Institut de Biologie Structurale (Grenoble), the Department CIBIO (University of Trento) and the Max Delbrück Center (Berlin), present the most detailed molecular insight into a lncRNA to date, but trigger the question whether 3D structures are equally important for the function of other lncRNAs. Marcia and his group want to continue analysing the structure and function of further lncRNAs. However, it will be impossible for them alone to study the many thousands of lncRNAs that human cells produce. “I truly hope that the methods and experimental approach we have followed will stimulate other colleagues in the community to pick up the baton from our study and help us expand the characterisation of lncRNAs,” says Marcia.

This part of information is sourced from https://www.eurekalert.org/pub_releases/2019-08/embl-li082119.php