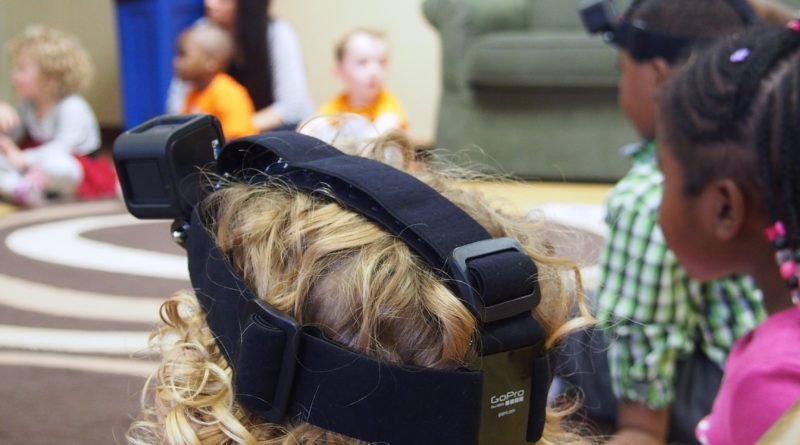 The researchers documented these different experiences using a novel technique in the classroom: They had children wear a video camera on their head for two hours on one day to see what the class was like from the child’s perspective.

In this study, published recently in PLOS ONE, the researchers were interested in the linguistic environment – how were children exposed to language in the class?

“We found that the duration and frequency of kids’ interactions with teachers and peers was very different among kids,” said Leydi Johana Chaparro-Moreno, lead author of the study and a doctoral student in educational psychology at The Ohio State University.

“Overall, children interacted more with the teacher than their peers, but for some kids their peers were an additional source of hearing language.”

This was something that researchers could not easily learn from traditional studies, she said.

Most previous studies observed how teachers behaved in the class, such as how they talked to kids.

“What was missing was the perspective of the kids. Especially in preschool classrooms, each child may not be listening to the teacher at the same time or interacting in the same way,” Chaparro-Moreno said.

The study involved 13 children, ages 3 and 4, who attended an urban nonprofit childcare center full-day preschool located in an urban community.

The children, whose parents agreed to let them join the study, wore the wireless head-mounted camera on a randomly assigned day during a four-day period.  They wore it for one hour in the morning, during which they participated in different kinds of activities: some involving the whole class, and some where the kids were free to choose what to do in various centers around the classroom.

Four children wore a camera each day, as did the master teacher.

Afterward, the researchers analyzed the videos to see how many times each child interacted with the teacher or a peer, how long each interaction lasted, and a variety of aspects of the interaction.

When someone was talking directly to a child wearing a camera in class, 81 percent of the time it was the teacher.

Kids also heard nearly all sophisticated language from their teachers – 92 percent of all complex sentences came from teachers.

But again, there was a lot of variability, Chaparro-Moreno said.

“Teachers may adapt how they interact with kids to meet the students’ learning needs,” she said.

“It is also possible that children’s language ability and personality may play a role in how they interact with the teacher and their peers.”

This study is part of a larger five-year, $4.5 million project called Early Learning Ohio funded by the federal Institute of Education Sciences, said Laura Justice, co-author of the PLOS ONE paper and principal investigator for the project.

The project, which involves students from preschool to grade 3, is “trying to identify those aspects of the classroom experience that are most important to academic development and social development,” said Justice, who is also director of Ohio State’s Crane Center for Early Childhood Research and Policy.

The data from the camera study will be used in future studies to model the social network in the classroom and examine how kids resolve conflicts with each other.

Researchers participating in the project are experimenting with other technologies, such as location sensors to see how kids move around classrooms and interact with their peers.

“Our goal is to map the dimensions of the classroom experience, including relationships with teachers and peers, how much kids enjoy school and whether they are victimized by other children,” Justice said.