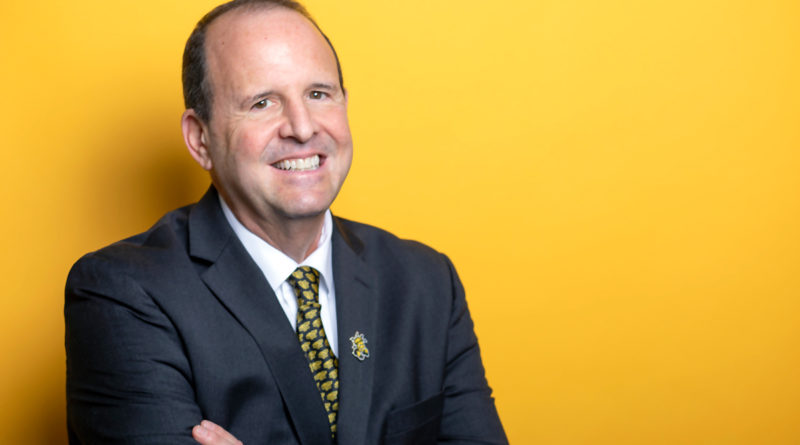 Wichita State University’s new President, Jay Golden, is a leading researcher in environmental sustainability and an advocate for applied learning and economic development.

Golden will become Wichita State’s 14th President in January 2020 during a period of rapid growth for the university and changes in higher education. He brings a background as a leading thinker and national leader on environmental sustainability, applied learning and economic development.

Golden was introduced to students, faculty and staff and community leaders on Thursday, Oct. 31, following his appointment by the Kansas Board of Regents. Golden is currently vice chancellor at East Carolina University, with responsibilities including developing public-private partnerships and building research campuses.

His previous faculty and administrative roles have been at two highly admired universities, Arizona State and Duke. At ASU, he founded and co-directed the Sustainability Consortium, then the world’s largest industry-academia collaboration focused on research and workforce development. It included many of the world’s top 150 manufacturers and brands.

Steve Clark, a Wichita business leader who served as search chair, said, “Dr. Golden has an extremely impressive record of accomplishments in research and higher education that will be invaluable for WSU’s future growth.”

“I have no doubt,” Clark said, “that Jay’s record of proven leadership will result in even greater accomplishments and recognition for Wichita State during what we expect will be his long tenure as President.”

Clark also chaired the search process leading to the appointment of John Bardo, who led the university from 2012 until his death in March 2019. Clark said that Golden, like Bardo, is focused on building upon the university’s history of innovation, entrepreneurship and applied learning.

Golden said he has long admired Wichita State from afar and gotten to know it better through his role organizing an American Athletic Conference Research and Innovation Consortium and through his visits to campus during the search process.

“I see this as an opportunity to dedicate myself to the university and the Wichita community as part of a team that can further transform our university and our region,” Golden said. “We can be the next great public research university in our own special Shocker way.

“That includes,” Golden said, “developing business and entrepreneurial approaches that make a Wichita State university degree more accessible, more affordable and more valuable for all of our students and all Kansans.”

Golden said he doesn’t see himself as a lone change agent, but rather as part of a team that will build on the legacy of President Bardo and the work of many others still at the university.

“It is imperative,” he said, “that leadership commits to an institutional culture at WSU based on respect, collegiality, inclusiveness, belonging and transparency. My personality is such that I thrive in a setting that encourages teamwork and innovative approaches in creating new visions for academic pursuits, research, innovation and service.”

His current institution is part of the University of North Carolina system, as WSU is part of the Kansas Regents system. East Carolina University, based in Greenville, has about twice the student population and three times the budget of WSU. Some of that difference comes from being in a much larger state and having a medical school and dental school.

“In addition to providing the best possible educational experience and learning opportunities, Wichita State University must provide a great value, or return on investment, to our students and their families,” Golden said. “I would task WSU to apply its innovative spirit to find ways to reduce student debt and be a leader in containing the increasing costs of attendance.”

He said he sees similarities between eastern North Carolina and south-central Kansas, in that retaining talented graduates is a major focus for the universities that serve those regions.

He has been working on those issues is many ways very similar to WSU. As vice chancellor with responsibilities including research, academics, innovations, economic development, federal and state relations and industry engagement, he has been responsible for developing new campus locations that bring together university students, faculty and research with business and government.

He has been doing this kind of work throughout his academic career, especially with an emphasis on environmental and corporate sustainability. At ECU, in addition to his administrative role, he is a tenured full professor of engineering, as well as in the marketing and supply chain department.

Golden came to ECU from Duke University, where he was a faculty member and chair of the Business & Environment Program and director of the Duke Center for Sustainability and Commerce.

Golden also served as associate vice provost for research at Duke, which is continually in the top 10 of all universities in research expenditures. Golden also served as executive in charge of the Duke Corporate Relations Office, working with global companies, CEOs and Boards of Directors.

He attended the University of Phoenix and Arizona State University as an undergraduate and earned a bachelor’s in management. He also completed Organizational Mastery of Project Management at Stanford University and the Harvard Graduate School of Education Institute for Management and Leadership in Education.

Author of more than 150 articles, Golden has participated in 100 invited presentations around the world. He has testified before Congress and directed the National Center of Excellence on Sustainable Materials and Renewable Technologies, while serving as a faculty member at Arizona State.

Golden was presented the Faculty Pioneer Award by the Aspen Institute for his leadership in the field of sustainable engineering education and research. He was also named one of the 100 most influential people in business ethics by the Ethisphere Institute. In 2017, Golden was nominated by peers and appointed to the Board of Scientific Counselors for the U.S. Environmental Protection Agency.

Golden brings both an entrepreneurial and business background to WSU, having founded a small engineering services company in Arizona that grew to have operations throughout the West and Southwest. He has also held leadership positions in the private sector including a Fortune 500 international service and technology company. Golden serves on a number of boards, including the North Carolina Biotechnology Center Board of Directors and the Coastal Studies Institute.

Golden is married to Dina Golden. They met while both were students at Arizona State. He was a member of Alpha Epsilon Pi fraternity and served on the inter-fraternity council at ASU. She was a member of the Delta Delta Delta sorority and graduated from the ASU College of Business with a degree in supply chain. She has worked for Fortune 500 companies in manufacturing and mining.

Athletics runs in the family. He was a varsity athlete in high school, competing in basketball and volleyball while growing up in Los Angeles. Golden went on to play lacrosse for Arizona State University and the University of Cambridge. She was a varsity soccer player in high school in Minnesota and continues her passions playing in soccer and tennis leagues.

Their older daughter, Samantha, earned degrees at the University of North Carolina in Chapel Hill in Business and Spanish Linguistics. She is working in high-tech in Seattle and plans to go back to college to earn her Ph.D.

Their younger daughter, Shea, is a junior at Middlebury (Vermont) College, where she is on the volleyball team and is studying neurosciences. Shea plans to go to medical school upon graduation.

Golden said he has a strong appreciation for working adults. Midway through his undergraduate studies, he served seven years as a full-time sworn police officer and hazardous materials specialist in Arizona, leading criminal investigations of state and federal white-collar environmental crimes.

He plans to visit Wichita during the fall and assume the presidency full time by the beginning of spring semester.

The mission of Wichita State University is to be an essential educational, cultural and economic driver for Kansas and the greater public good. Wichita State is a doctoral research university enrolling nearly 15,000 students and offering 59 undergraduate degree programs in more than 150 areas of study in seven undergraduate colleges. The Graduate School offers 45 master’s and 12 doctoral degrees that offer study in more than 100 areas. Wichita State’s Innovation Campus is an interconnected community of partnership buildings, laboratories and mixed-use areas where students, faculty, staff, entrepreneurs and businesses have access to the university’s vast resources and technology. For more information, follow us on Twitter at www.twitter.com/wichitastate and Facebook at www.facebook.com/wichita.state.