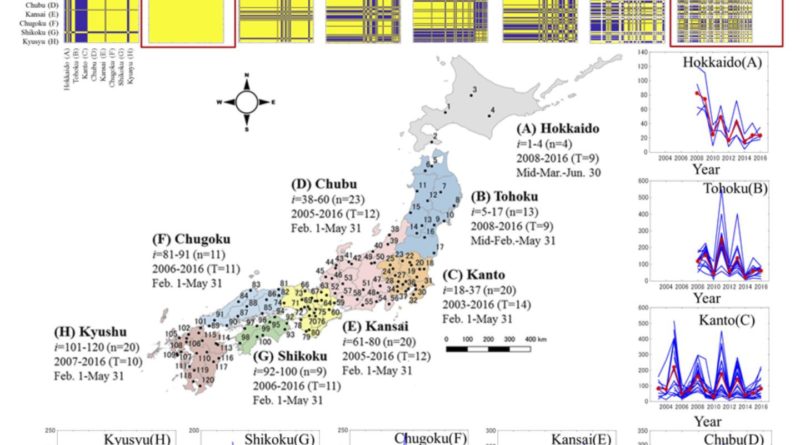 Tokyo, Japan – Complaints of allergic rhinitis (hayfever) are common worldwide, affecting around 17% of the Japanese population in spring and summer (around 20 million people). In Japan, the main tree species causing hayfever are Japanese cedar and Japanese cypress, with a combined land area of over 7 million hectares. Their pollen is dispersed between February and May and causes a range of symptoms from itchy eyes and runny noses through to severe respiratory disorders.

Management of these symptoms is dependent on timely and accurate pollen forecasting. It is known that the pollen from these trees has alternate annual cycles of ON (abundant pollen) and OFF (lower amounts) but it is not yet known how the dispersal of pollen synchronizes across Japan as studies to date have been based on only time-limited and local data.

In a study published on August 7th in

, researchers from Tokyo University of Agriculture and Technology (TUAT) made use of publicly available data from the Japanese Ministry of the Environment’s “Hanako-san” pollen observation system to investigate annual fluctuations in pollen distribution at 120 locations for 15 years and to clarify the spatial synchronization across the Japanese islands.

This research is the first of its kind to study this synchronicity at the national scale and operates across a wide range of academic fields such as nonlinear physics, ecology, and environmental science. “We used a new ‘in-phase and out-of-phase’ approach as an update to the previous correlation-based methods,” says co-author of the study Kenshi Sakai. “We found that the phase synchronizations within and between regions were strong in eastern regions of Japan, such as Hokkaido and Kanto, but the synchronization in western regions was much weaker.”

Remarkably, all 120 sites in Japan behaved perfectly in-phase in 2009-2010, even over distances of over 1600 km. In a dramatic contrast, almost perfect desynchronization occurred in 2015-2016. “We still don’t know what causes these regional differences in the pollen dispersal behavior,” says lead author Akira Ishibashi, “It could be related to correlations in environmental variabilities at the locations of the different tree populations, known as the Moran effect.”

Further research will be needed to pinpoint the specific mechanisms behind the observed synchronicity, but the findings will be useful for application in numerical forecasting of pollen abundance, which is crucial to clinicians and individuals suffering with hayfever.

“These findings and our proposed technique with an in-phase matrix have other applications outside of improving the prediction accuracy of allergenic pollen,” says Sakai. “The new technique could also be used to quantitatively explain other environmental changes throughout Japan.”


About Tokyo University of Agriculture and Technology (TUAT)

TUAT is a distinguished university in Japan dedicated to science and technology. TUAT focuses on agriculture and engineering that form the foundation of industry, and promotes education and research fields that incorporate them. Boasting a history of over 140 years since our founding in 1874, TUAT continues to boldly take on new challenges and steadily promote fields. With high ethics, TUAT fulfills social responsibility in the capacity of transmitting science and technology information towards the construction of a sustainable society where both human beings and nature can thrive in a symbiotic relationship. For more information, please visit

This part of information is sourced from https://www.eurekalert.org/pub_releases/2019-08/tuoa-jts082519.php