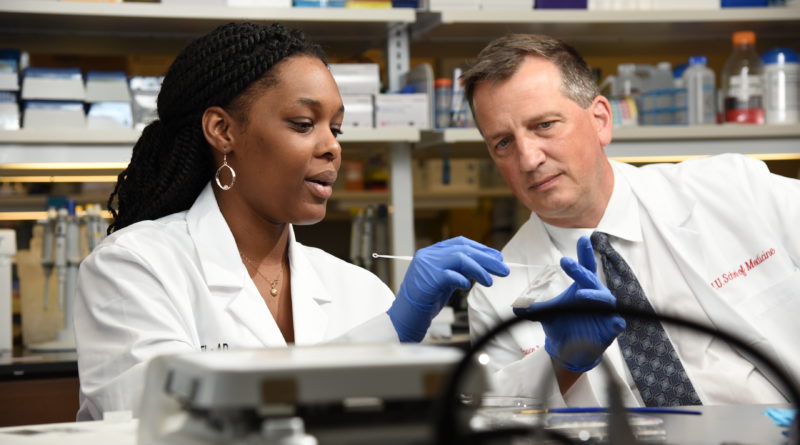 INDIANAPOLIS — Indiana University School of Medicine has been awarded a grant expected to total $36 million over five years from the National Institutes of Health to launch a drug discovery center to accelerate the development of promising treatments for Alzheimer’s disease.

The center is a strategic partnership with the Purdue Institute for Drug Discovery. It is one of only two such multi-institution teams in the nation selected as part of a new federal program intended to “improve, diversify and reinvigorate the Alzheimer’s disease drug development pipeline,” according to the National Institute on Aging, which is part of the NIH and is funding the program.

“There is much work to be done to solve the mysteries of Alzheimer’s and improve the lives of individuals and families affected by this insidious and devastating disease,” IU President Michael A. McRobbie said. “To this end, Indiana University is deeply committed to expediting the development of innovative medications and treatments for Alzheimer’s disease — building upon the leading role our School of Medicine has played in discovering ways of predicting onset of the disease, presenting new therapeutic targets and developing research tools used by scientists around the world.

“We are extremely grateful to the National Institutes of Health for this extraordinary grant that will further IU’s robust efforts to advance the scientific research needed to fulfill our vision of slowing — and ultimately defeating — a disease that has resisted effective treatment for far too long.”

The IU-led center will initially focus on proteins, or targets, related to the brain’s immune system that may contribute to Alzheimer’s disease. They will be culled from an extensive list of potential targets nominated by researchers at elite medical institutions across the nation as part of the NIA-led Accelerating Medicines Partnership on Alzheimer’s Disease.

There is a growing body of evidence that certain genes associated with the immune system may be linked to Alzheimer’s disease, opening a new avenue for research and drug discovery. This focus on the immune system is consistent with IU’s Precision Health Grand Challenge initiative.

The establishment of the NIA-funded drug discovery centers comes at a time when many pharmaceutical companies are scaling back efforts in the area or refocusing their strategies following setbacks of expensive, late-stage drug trials. The goal is to develop high-quality research tools and new technologies needed to broaden the number of targets being investigated, and for universities to conduct the earliest stages of drug discovery, eliminating some of the risk for pharmaceutical companies, biotech firms and other investors.

“The challenges of finding effective medicines for Alzheimer’s disease are numerous and complex,” said Alan Palkowitz, a senior research professor at IU School of Medicine who will lead the center. “It is going to require a very strong ecosystem that is enriched with scientific diversity and new collaborative models. The emergence of centers like this, which can not only perform cutting-edge science but also inform the community with results, are going to be important partners with all groups who are committed to creating breakthrough therapies.”

Palkowitz was recruited to IU School of Medicine through the IU Precision Health Initiative in late 2018 after 28 years at Eli Lilly and Co., where he most recently served as vice president of discovery chemistry research. The center’s co-principal investigator is Bruce Lamb, executive director of the Stark Neurosciences Research Institute, Roberts Family Professor of Alzheimer’s Disease Research and director of the NIA-funded IU/Jackson Laboratory Alzheimer’s Disease Precision Models Center at IU School of Medicine.

Alzheimer’s disease is the most common cause of dementia in the aging population, affecting an estimated 5.5 million Americans, about 110,000 of whom live in Indiana. The national number is projected to rise as high as 14 million by 2050. There are currently no treatments to prevent or slow progression of the disease.

Notably, all data, methods and tools generated by the NIA-funded centers will rapidly be made available to researchers from academia, nonprofit research organizations, biotech and the pharmaceutical industry for use in drug discovery and basic biology research.

The IU-led center will likely result in 15 to 20 jobs being added between IU and Purdue. The five-year grant began Sept. 30. It is funded through the NIA’s Alzheimer Centers for Discovery of New Medicines program.

“We are honored to be selected to provide national leadership as the NIH moves more aggressively into funding new translational infrastructure programs for Alzheimer’s disease and to expand the pipeline of promising drug candidates,” said Dr. Jay L. Hess, dean of IU School of Medicine and IU’s executive vice president for university clinical affairs. “This center complements and builds on our extensive expertise in Alzheimer’s disease research and is a critical piece of the puzzle needed to develop new therapies.”

Purdue University is home to substantial drug discovery and development talent within the Purdue Institute for Drug Discovery. Resources and research facilities within the institute, such as a high-throughput chemical genomics screening facility, have allowed affiliated faculty to define novel disease biology, discover and develop numerous drugs in a variety of disease areas, and launch more than 30 new companies.

The IU Alzheimer’s disease drug discovery center will leverage all of those programs, as well as the expertise and infrastructure available through the Indiana Clinical and Translational Sciences Institute and the IU Precision Health Initiative, both based at IU School of Medicine.

The IU-led center is funded by NIH grant number U54AG065181. Emory University in Atlanta will lead the other NIA-funded center together with Sage Bionetworks in Seattle and the Structural Genomics Consortium in the U.S., Canada and U.K.

This innovative work reflects IU’s extensive expertise and research in curing, treating and preventing chronic illnesses. To build on the intersection of these areas of core strength and to bring precision medicine treatments to Hoosiers, IU President Michael A. McRobbie in June 2016 announced IU’s inaugural Grand Challenge, the Precision Health Initiative.

“Right now is a critical time for Alzheimer’s disease research. It is clear that we need more targets, better targets and better animal models to test the targets. As a result of NIH investments in our programs and infrastructure, IU School of Medicine has all of the components needed to make major contributions to the field. Importantly, everything we learn and develop will be shared with the scientific community.” — Bruce T. Lamb, co-principal investigator and executive director of the Stark Neurosciences Research Institute, IU School of Medicine

“Perhaps the only thing that has become abundantly clear to everyone involved in the fight against Alzheimer’s disease is that finding a treatment has proven much more difficult than anyone could have thought. This unique drug discovery center pools our world-class scientific talent with disease targets and potential lead molecules to help us accelerate the most compelling combinations to the next step.” — Dr. Anantha Shekhar, executive associate dean for research affairs at the IU School of Medicine and founding director of the Indiana Clinical and Translational Sciences Institute

About Indiana University School of Medicine

IU School of Medicine is the largest medical school in the U.S. and is annually ranked among the top medical schools in the nation by U.S. News & World Report. The school offers high-quality medical education, access to leading medical research and rich campus life in nine Indiana cities, including rural and urban locations consistently recognized for livability.