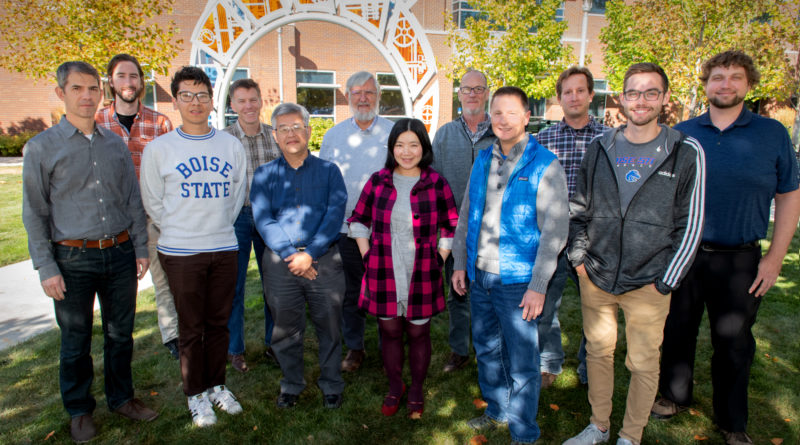 Boise State staff scientist Ryan Pensack and Surface Science Lab manager Paul Davis of the Micron School for Materials Science and Engineering (MSMSE) have a passion for unraveling processes that unfold on extremely fast timescales. How fast, exactly? A millionth of a billionth of a second.

“Physical processes that occur on the timeframe of femtoseconds require ultrafast lasers to track them,” Pensack explained.

Pensack and Davis will be using such ultrafast lasers in their role as co-principal investigators on two recently awarded grants to study quantum computing and entanglement: a Department of Defense Office of Naval Research grant worth nearly $3.7 million over three years, and a Department of Energy Basic Energy Sciences Established Program to Stimulate Competitive Research grant totaling $3 million over two years. If the initial two-year phase of the latter grant is successful, it can be extended an additional four years and supplemented by up to $10 million.

The overarching goal of these grants is to create, corral and control the elusive molecular exciton – a quasi-particle found in the photosynthetic systems of plants, algae and certain bacteria. The research team is pioneering the use of DNA as a programmable, self-assembling architecture to organize dye molecules (like those found in plants) for creating and controlling room temperature exciton quantum entanglement.

“This exciting work has the potential to be a game changer for computing of the future,” said Harold Blackman, Boise State’s interim vice president for research. “The basic science being explored is unique to the outstanding team formed by Bill Knowlton and Bernie Yurke and will further Boise State’s reputation as a truly innovative institution.”

Natural photosynthetic systems create excitons from captured sunlight. These excitons are then transported and used to produce chemical energy, or food, for the organism.

It turns out certain excitons in these natural systems show wave-like rather than particle-like behavior,” Bernard Yurke, a distinguished research fellow at Boise State serving as co-principal investigator and co-lead on both grants, said. “Quantum entanglement allows for very low energy loss during transport; thus, these wave-like excitons can be used for extremely efficient energy transport, as well as quantum computing.”

Associate professor of materials science and engineering Lan Li, who jointly leads the theory effort with Yurke, describes the approach by which the dyes are organized and arranged using DNA scaffolds to ensure exciton wave-like behavior is observed.

The first grant, from the Department of Energy Basic Energy Sciences Established Program to Stimulate Competitive Research will support research on “DNA-Controlled Dye Aggregation – A Path to Create Quantum Entanglement.”

The second grant from the Department of Defense’s Office of Naval Research will support research on “Optimizing DNA-assembled Dye Aggregates for Quantum Coherent Exciton Devices.”

While both grants are focused on wave-like molecular excitons, they use different classes of dye molecules (i.e., material systems), characterization techniques and instrumentation to pursue fundamentally different objectives.

Micron School of Materials Science and Engineering associate professor Elton Graugnard, who leads the single molecule imaging team for both grants, explained the research in the following way.

“One limitation of current quantum computing approaches is that they typically require temperatures near absolute zero to operate, and such conditions are expensive to achieve and maintain. These photosynthetic systems inspired us to seek a possible path to room temperature quantum computing,” said Graugnard.

Associate professor Jeunghoon Lee (joint appointment in chemistry and biochemistry, and materials science and engineering) is co-principal investigator on the Department of Energy grant and leads the dye design efforts.

“The basic scientific question we are attempting to answer is, can we create and control quantum entanglement in molecular excitonic systems and extend how long this ‘quantum coherence’ persists?” said Lee.

“Our preliminary theoretical work indicates that certain configurations of key quantum parameters lead to quantum entanglement,” Yurke added. “We propose that these quantum parameters can be controllably tuned by tailoring dye structure properties, which is what we will be pursuing.”

The team’s research in room-temperature quantum coherence using DNA-templated dyes began in 2010, and steadily has progressed since.

The original research was supported through a variety of mechanisms that allowed the teams to obtain initial results, including the Nanoscale Materials and Device Group, and financial support from individual donors, all of which led to initial funding from NASA, National Science Foundation and the Department of Energy.

Knowlton credited the support of Boise State’s research administration and the Micron Foundation for the success and continued growth of the teams’ research.

“Harold Blackman and former vice president for research, Mark Rudin, have been particularly supportive over the long term and provided key input for these two grants. Student support via the College of Engineering, and the gift by the Micron Foundation to seed the founding of the doctoral program in the Micron School of Materials Science and Engineering certainly have played a pivotal role as well,” said Knowlton.