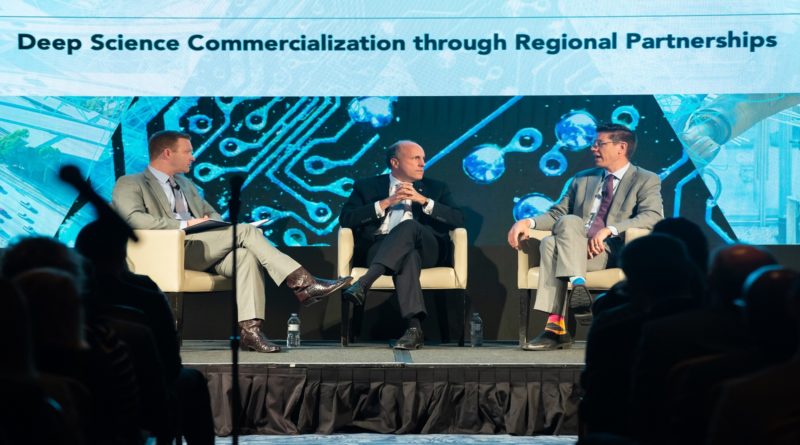 Summit kicks off the conversation between laboratories, companies about how AI can transform society.

Artificial intelligence (AI) is changing the world around us, from making our cities smarter to paving the way for faster drug discovery. As part of the burgeoning effort to connect different key players in AI, the U.S. Department of Energy’s (DOE) Argonne National Laboratory recently hosted the InnovationXLab℠ Summit on AI to raise the profile of the labs’ work in AI and forge new partnerships between industry and the national laboratories.

Held in Chicago on Oct. 2 and 3, the AI XLab summit provided an opportunity for companies around the country to engage with the U.S. Department of Energy’s 17 national laboratories and representatives from other government agencies.

“We have before us a transformational moment, a golden age of AI,” said U.S. Secretary of Energy Rick Perry. ​“We must make the most of it and remain at the forefront of this critical technology.”

“The InnovationXLab series kick-starts our DOE’s commercialization efforts in critical topic areas by allowing the private sector to engage directly with our national labs on technologies poised to greatly affect American lives,” added Conner Prochaska, DOE’s chief commercialization officer and director of the Office of Technology Transitions (OTT). ​“With its track record in high-performance computing and the all-new Aurora exascale supercomputer on the way in 2021, Argonne was a strong choice to host our AI summit.”

Being able to host a conversation around AI, with its power to transform so many aspects of our world, ​“represents a major opportunity for Argonne to demonstrate leadership by bringing talented people with bright ideas together to address challenges in energy, transportation, manufacturing, and health care,” said Argonne Laboratory Director Paul Kearns.

The two-day event featured discussions on the potential for industry collaborations in AI, and the use of AI in fields ranging from manufacturing to optimizing the electric grid. Additional panel discussions involved AI for drug discovery and precision medicine, AI for mobility, AI for advanced materials development, AI for infrastructure, AI for energy production and AI for urban systems.

“At the AI summit, we wanted to open new conversations,” said Rick Stevens, Argonne associate laboratory director for computing, environment and life sciences. ​“There were people from industry who may not have known how to best collaborate with the labs, and the event served to kick-start a lot of exciting discussions.”

These discussions brought together scientists and engineers who exchanged ideas about the most salient or exciting issues that AI can address. ​“At this meeting, industry gained insight into how our AI skillsets and capabilities, which are still growing and emerging, would add the most value to the challenges ahead of them,” said Ushma Kriplani, interim associate laboratory director for scientific and technical partnerships and outreach.

The AI summit was the fourth InnovationXLab event hosted by a DOE National Laboratory, but it was the first to focus on what Stevens termed an ​“emerging” area of science. ​“The previous summits focused on batteries, the power grid and manufacturing, all of which have had decades of DOE investment and many well-established relationships,” Stevens said. ​“AI, in relative comparison, is so new, and the vast majority of its impact will be felt in the future.”

Unlike fields like batteries or advanced manufacturing, where the national laboratories maintain both deep expertise and tools and capabilities that would be unsustainable by any one company, many AI capabilities are already found in industry, according to Kriplani. ​“The exciting thing about partnerships in AI is that the crossflow of both ideas and capabilities is truly bidirectional,” she said.

Transforming these initial discussions into reality will be helped by the creation of a national AI strategy, which will need to be formulated by a consortium of government, academic and industry partners like those who attended the AI summit, Stevens said. ​“Having an event like this is an essential and effective first step, but it is still a first step,” he said. ​“The next step is creating the conditions most favorable for these initial discussions to become full-fledged partnerships, and then for those partnerships to succeed.”

According to Kriplani, one of the initial discussions coming out of the InnovationXLab AI Summit involves potentially using AI to look at remaining battery lifetimes. ​“Both the labs and industry are at the stage of trying to figure out if we’re talking about the same problem and determining whether we can do something about it,” she said. ​“The hard part is figuring out which questions interest both sides equally; that takes the most time and has the most nuance.”

The ultimate success of industry–lab partnerships, for AI and other areas of focus, comes largely as a result of the cooperation between the 17 national laboratories and their joint effort to make their world-class capabilities and expertise available. ​“The event positioned all the laboratories on an equal footing,” Stevens said. ​“The goal of this meeting was to showcase all the labs as a whole for industry’s benefit, and Argonne was honored to be the host.”

DOE’s Office of Technology Transitions partnered with Argonne in developing the program and planning the event.