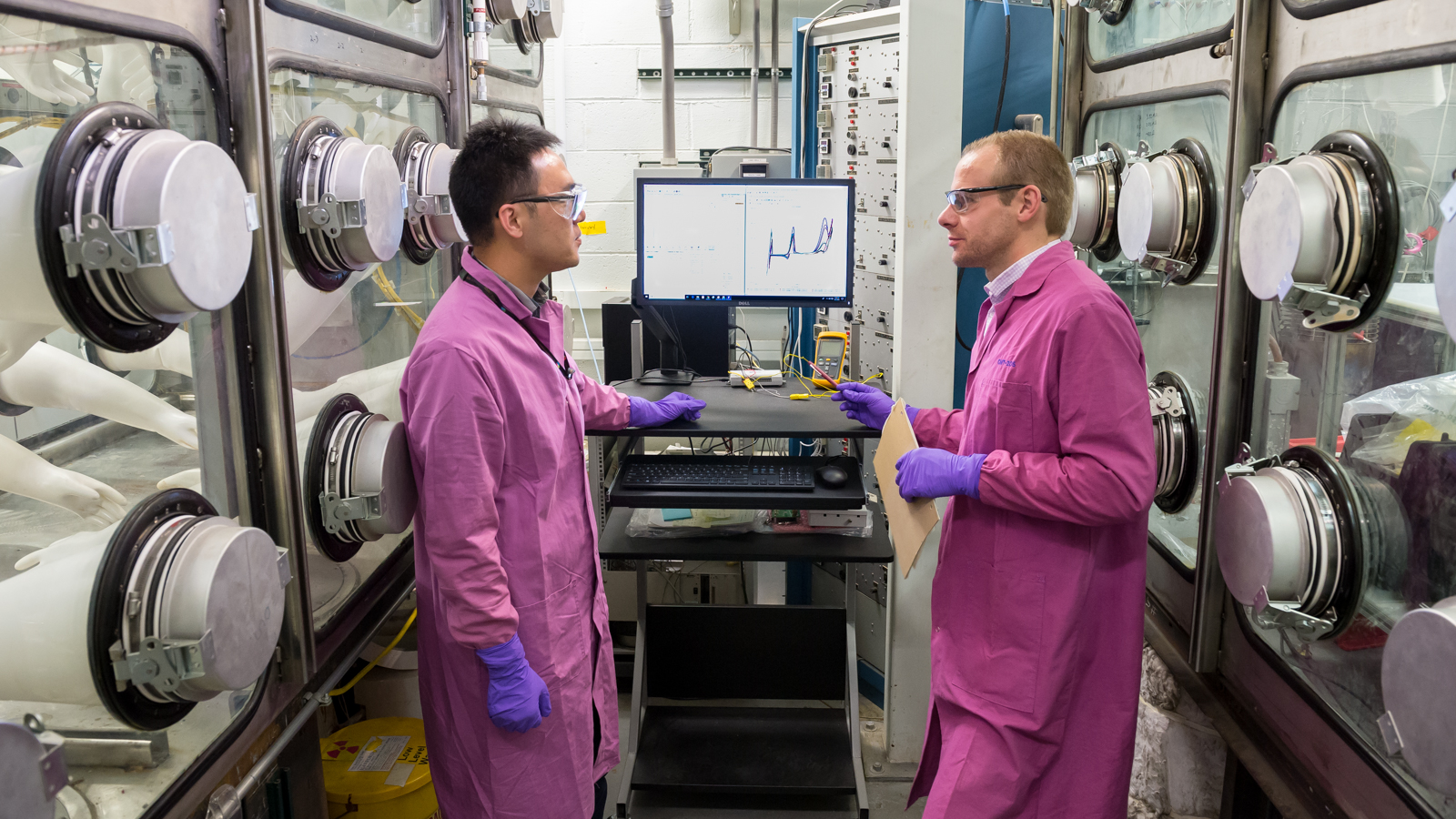 Scientists at Argonne and Oak Ridge national laboratories are drawing on decades of nuclear research on salts to advance a promising solar technology.

Nuclear power and solar power may seem like very different energy sources. Nuclear power stems from the energy released when neutrons crash into uranium atoms, splitting them apart. Solar power stems from the sunlight beaming down on earth. But some solar plants convert that light into heat, which can be used just like the heat of a nuclear reactor to generate steam to make electricity. And both energy sources often share a key ingredient: salt.

Engineers sometimes use molten salt to fuel and cool nuclear reactors. As nuclear fuel, salt is attractive because it withstands radiation and can operate at near-normal pressure and relatively low temperatures. Salt also remains fairly inert and stable within the nuclear fuel cycle. Now engineers from the U.S. Department of Energy’s (DOE) Argonne and Oak Ridge national laboratories are drawing on decades of nuclear research on salts to advance a solar technology called concentrating solar-thermal power (CSP).

Turning up the heat

CSP works when mirrors reflect and concentrate sunlight onto a receiver, which absorbs the light, converting it into heat stored in a hot fluid. Similar to power sources, such as nuclear and fossil fuels, that heat turns turbines, generating electricity.

Scientists are working to make CSP more efficient and cost-effective than competing technologies. Commercial CSP power plants, such as the groundbreaking U.S. Crescent Dunes Solar Energy Project, generate and store electricity by heating molten, or liquid, nitrate salts to 565 degrees Celsius. But that temperature caps the system’s efficiency and makes it difficult for reducing production costs.

Now scientists are turning to chloride salts, which can be heated up to 750 degrees Celsius. At higher temperatures, CSP may yield high enough efficiencies to hit the target cost range — 5 to 10 cents per kilowatt-hour, as opposed to 10.3 to 18.4 cents per kilowatt-hour today — of DOE’s Solar Energy Technologies Office (SETO) within the Office of Energy Efficiency and Renewable Energy. To achieve this goal, SETO is funding research at Argonne and Oak Ridge, as well as several other national laboratories and universities.

“The most efficient CSP systems take advantage of a large temperature difference between the hot leg (the pipe section containing the highest-temperature fluids) and the cold leg (the pipe section that carries salt from the turbines after its heat has been transferred),” said James Willit, principal chemist in Argonne’s Chemical and Fuel Cycle Technologies division. ​“That big difference in temperature lets you generate a lot more electricity.”

Despite its promise, high-temperature molten salt tends to corrode many materials. ​“You need to control what’s going on in the salt to avoid corrosion and equipment failure,” said Nathaniel Hoyt, a chemical engineer at Argonne. He and Argonne team members Mark Williamson, director of the Chemical and Fuel Cycle Technologies division, and Jicheng Guo, a postdoctoral researcher, are working toward a solution.

In 2018, the team joined a collaboration of researchers from Oak Ridge, Virginia Tech, and the University of Utah who are building a CSP prototype for high-temperature molten salt to test the concept’s performance. Argonne’s role is two-fold:

Argonne’s sensors measure electrochemical responses in the salt, gauging its health and spotting possible problems. When salt is exposed to water, for example, hydrochloric acid forms in it, which can corrode the CSP system’s metal pipes. This corrosion leads to the presence of chromium, iron, and other structural metal ions in the salt, which can shorten the system’s longevity.

Once the sensors detect impurities, the system automatically turns on a separate electrolysis system, which adds magnesium to the salt to remove the corrosive elements.

“We actively maintain the salt impurities in a range where corrosion won’t happen,” Hoyt said.

The technology is rooted in Argonne’s founding mission of exploring peaceful uses of nuclear energy. Decades of work with high-temperature molten salts has led to advances in reactor designs and pyroprocessing, a method of recovering and reusing nuclear fuel that was pioneered at the laboratory, noted Williamson.

The work is also part of a larger, five-year program funded by SETO, called Gen3 CSP, to find the best approach to next-generation high-temperature CSP systems. Instead of heating molten salt, for example, why not heat gases like carbon dioxide, and solids, like sand or ceramic particles? Scientists at other national laboratories and universities are working on their own projects to seek answers.

“The most efficient CSP systems take advantage of a large temperature difference between the hot leg and the cold leg. That big difference in temperature lets you generate a lot more electricity.”  — James Willit, principal chemist, Chemical and Fuel Cycle Technologies division

It is too early in the race to pick front-runners, though. The next steps for scientists at Argonne and Oak Ridge are to install the prototype’s major components, operate it successfully, and complete initial testing. If SETO picks Argonne and Oak Ridge’s approach in 2021, the scientists will build their CSP system at an even larger scale, demonstrating both laboratories’ versatility in adapting proven technology from one industry to another.

Argonne National Laboratory seeks solutions to pressing national problems in science and technology. The nation’s first national laboratory, Argonne conducts leading-edge basic and applied scientific research in virtually every scientific discipline. Argonne researchers work closely with researchers from hundreds of companies, universities, and federal, state and municipal agencies to help them solve their specific problems, advance America’s scientific leadership and prepare the nation for a better future. With employees from more than 60> nations, Argonne is managed by UChicago Argonne, LLC for the U.S. Department of Energy’s Office of Science.