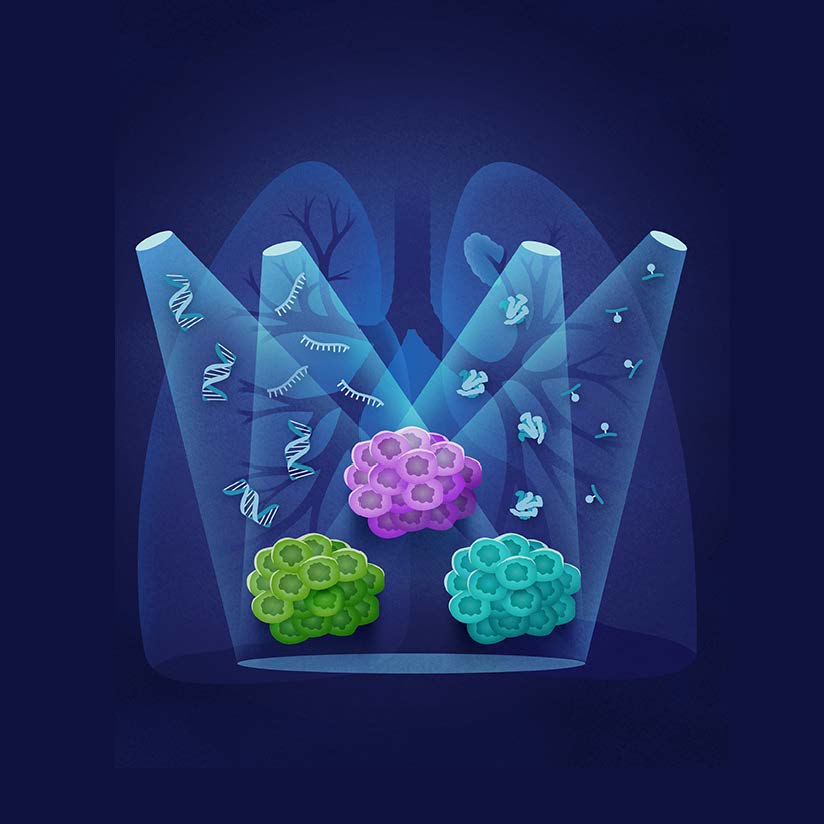 Bethesda, Md. – Lung cancer is the leading cause of cancer deaths globally and a top cause of cancer deaths in the Military Health System. However, the ability to determine which of these patients have aggressive tumors and which will respond better to certain treatments – could soon be available through the collective analysis of proteins and genomes, according to a new study published Nov. 15 in Cell Reports Medicine, led by researchers at the Uniformed Services University (USU).

The researchers sought to make advancements in this highly lethal cancer by looking specifically at the process through which genes (DNA) are converted to the messenger transcript (RNA), in cells, thus making proteins – a process known as the Central Dogma of Molecular Biology. When things go wrong during this process, the signal can change, thus turning healthy cells into cancer. In this study, the researchers analyzed all aspects of this process by applying several large scale technologies – whole genome sequencing, RNA sequencing, and proteomic profiling – to the most common type of lung cancer, lung adenocarcinoma. Ultimately, by bioinformatics data analysis of the DNA, RNA, protein, and phosphoprotein in cells – or what they refer to as proteogenomic characterization – they were able to connect certain molecular features of tumors with patient survivability, which could help better predict a patient’s outcome and inform clinical management.

As a result of this analysis, the researchers also suggest their findings could lead to improved diagnostics, explained Dr. Matthew Wilkerson, one of the study’s co-authors and an associate professor in USU’s Department of Anatomy, Physiology, and Genetics, and Director of the Data Science Division in USU’s Center for Military Precision Health.

“Our results show that patient survival can be well-predicted by protein levels in tumors, which may enable molecular diagnostics in smaller biopsies and tissue available in the clinic, which are otherwise challenging,” Wilkerson said.

Furthermore, the analysis uncovered an entirely new molecular subtype of lung cancer. While previous studies have characterized lung cancer in those who are current smokers and those who have never smoked, this study found a third group, which turned out to be dominated by structural alterations – the disorganized genome – and former smokers. Ultimately, this suggests that not only if you smoked, but when you smoked affects the type of tumor you develop.

The study, “Proteogenomic analysis of lung adenocarcinoma reveals tumor heterogeneity, survival determinants and therapeutically-relevant pathways,” was part of the Applied Proteogenomics Organizational Learning and Outcomes (APOLLO) network, a collaboration that launched in 2016 in response to the White House’s Cancer Moonshot initiative. APOLLO is led by USU’s Murtha Cancer Center (MCC)/Research Program (MCCRP), and is a collaboration between the National Cancer Institute, the Department of Defense, and the Department of Veterans Affairs, and is aimed at incorporating proteogenomics into patient care.

Through APOLLO, additional studies are underway, using proteogenomics to analyze all aspects of the Central Dogma of Molecular Biology in hopes of improving care for many other forms of cancer.

“This work is significant because these are novel findings that have been identified through using multiple molecular platforms looking at DNA, RNA, and protein expression on a highly characterized lung adenocarcinoma sample collection that have led to a new understanding of both the biology of lung adenocarcinoma as well as potential therapeutic targets for the disease,” said Dr. Craig Shriver, co-author on the study and director of USU’s MCCRP.

“A unique strength of this study is the comprehensive clinical data and follow-up from a U.S. cohort,” added Dr. Robert Browning, co-author on the study and a professor of Medicine at USU. “By avoiding potentially wide variations in medical practice with predominantly international cohorts we greatly increased confidence in the survival and outcome results for the study,” Browning said.

“It was the combination of this exceptional clinical data to the unparalleled array of multi-omic analysis that led to one of the major findings of the study,” Browning said. “This discovery of a new subtype of lung adenocarcinoma, associated with former smokers that are often excluded from current lung cancer screening criteria, yet with some of the least treatable lung adenocarcinoma mutations and very poor survival, may provide broad translational applications in potential prevention pathway targets, screening markers and precision treatment in the very near future.”

About the Uniformed Services University of the Health Sciences: The Uniformed Services University of the Health Sciences, founded by an act of Congress in 1972, is the nation’s federal health sciences university and the academic heart of the Military Health System. USU students are primarily active-duty uniformed officers in the Army, Navy, Air Force and Public Health Service who receive specialized education in tropical and infectious diseases, TBI and PTSD, disaster response and humanitarian assistance, global health, and acute trauma care. USU also has graduate programs in oral biology, biomedical sciences and public health committed to excellence in research. The University’s research program covers a wide range of areas important to both the military and public health. For more information about USU and its programs, visit www.usuhs.edu.