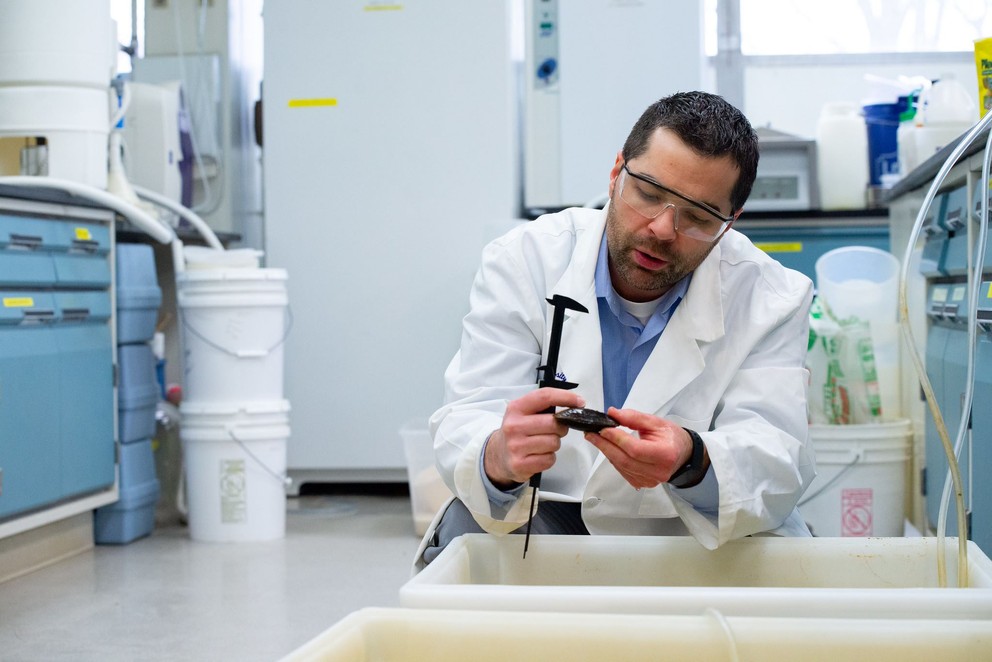 UNIVERSITY PARK, Pa. — Salt levels are rising in freshwater lakes and streams throughout Pennsylvania, leading to higher treatment costs and corroding public infrastructure, according to a Penn State researcher.

To Nathaniel Warner, assistant professor of civil and environmental engineering and recipient of a new National Science Foundation CAREER Award, a lack of available water-quality data and an abundance of potential salt polluters, such as road salting and oil and gas wastewater, makes it difficult to mitigate further contamination.

“We’re getting less data because we’re not investing in understanding how these things occur,” said Warner.

Supported by the five-year $500,000 CAREER Award, Warner will research new methods of collecting water-quality data, including the development of sensors built with open-source hardware and software. These sensors, he noted, can be built at home by anyone willing to learn how to write simple computer code.

“The technology is not that crazy when it comes to measuring salinity,” said Warner. “You’re really just creating a charge across two pieces of metal and measuring how much resistance there is.”

Warner will lead workshops with schools and local watershed associations to teach them how to use the homemade sensors to collect their own water-quality data, which will enable communities to take a more active role in assessing their local water quality and provide a great opportunity to introduce students to research.

Once the data is collected, the citizen scientists will then plot their results onto a map of their local watershed, highlighting locations with higher salt concentrations. Warner can then target those “hot spots” for further analysis by collecting sediment cores and freshwater mussels, both reliable recorders of water quality.

“Freshwater mussels are sitting there, living in the water, recording things,” said Warner. “They are incorporating contaminants into their soft body tissue and into the shell itself.”

Just like rings in a tree, scientists can count the layers in sediment cores and the shells of freshwater mussels to get a sense of the quality of the water during a certain period of time. Warner will be analyzing their chemical composition for certain isotopic ratios and elements, such as barium, strontium and radium, that are associated with specific salt pollution sources.

When this evidence from the past is combined with data collected in present day, patterns begin to form, and the contamination origins are revealed.

“If you establish some of these methods, you can actually say, ‘This has this specific isotope ratio, and with the freshwater shell I can see that something in the river changed 10 years ago,’” said Warner.

Warner joined Penn State as an assistant professor in 2015 and is an affiliate faculty member with the Institutes of Energy and the Environment.