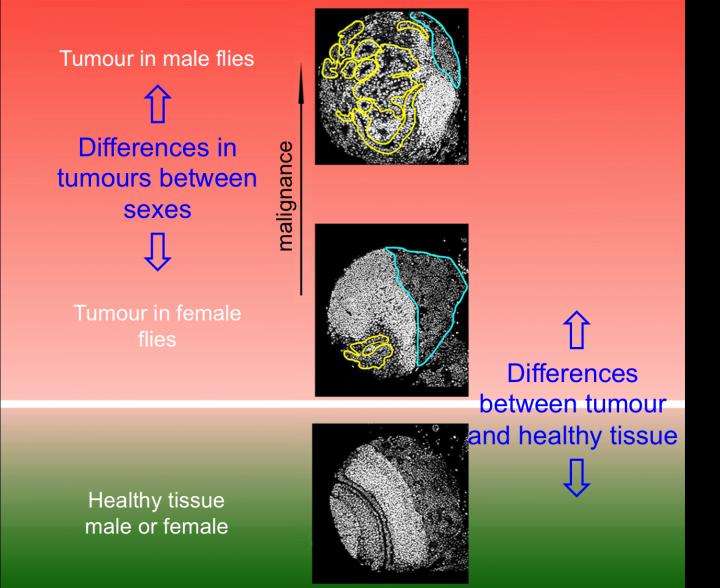 Cancer does not affect men and women equally, but we know little about the molecular causes underlying this difference. Published in

, a study by the Institute for Research in Biomedicine (IRB Barcelona) involving the vinegar fly,

, has identified possible regulators that determine differences in tumours between sexes.

“We have identified possible regulators responsible for tumour differences between male and female flies,” says ICREA researcher Cayetano González, head of the Laboratory of Cell Division at IRB Barcelona. “The results also show that these genes could be potential targets to neutralize their degree of malignancy,” adds the researcher.

Epidemiological studies have shown that there are notable differences in the degree of incidence and survival of cancer between men and women, even in tumours not related to reproductive organs. This is the case, for example, in certain types of brain tumour, and also in the case of children in which the influence of risk habits can be ruled out.

González and his team compared the development of experimental tumours induced in the brains of male and female vinegar flies. They observed that the former tumours were more aggressive and identified numerous proteins whose expression was markedly higher in tumour cells of male flies compared to females.

“Many of the possible regulators of sex-dependent differences in tumours that we have identified in our Drosophila model are highly conserved proteins that are also found in humans,” says González.

Among the proteins identified in this study, the researchers focused on the so-called Phf7, which is also found in humans. Phf7 is present in tumour cells in males, which show more aggressiveness, and absent in tumour cells in females. They found that by removing this protein in male flies, the aggressiveness of the tumours was markedly reduced, reaching levels similar to those present in female flies.

“Our results show that the proteins responsible for the differences in tumours between males and females can be regulated to reduce the degree of malignancy that is associated with the sex of the individual affected,” explains Cristina Molnar, postdoctoral researcher at IRB Barcelona and first author of the study.

“Understanding the molecular basis responsible for the sex-related differences in the incidence and development of cancer may allow us to find specific treatments for men and women,” González adds.

This study was carried out in the vinegar fly

, an experimental model that been used for research purposes for more than a hundred years and that has allowed the discovery of many of the proteins that are of great relevance in human cancer. In recent decades, experimental models of various types of human cancer, such as leukaemia, neuroblastoma, glioblastoma and ovarian cancer, among others, have been developed in this animal model.

This part of information is sourced from https://www.eurekalert.org/pub_releases/2019-08/ifri-iog081619.php