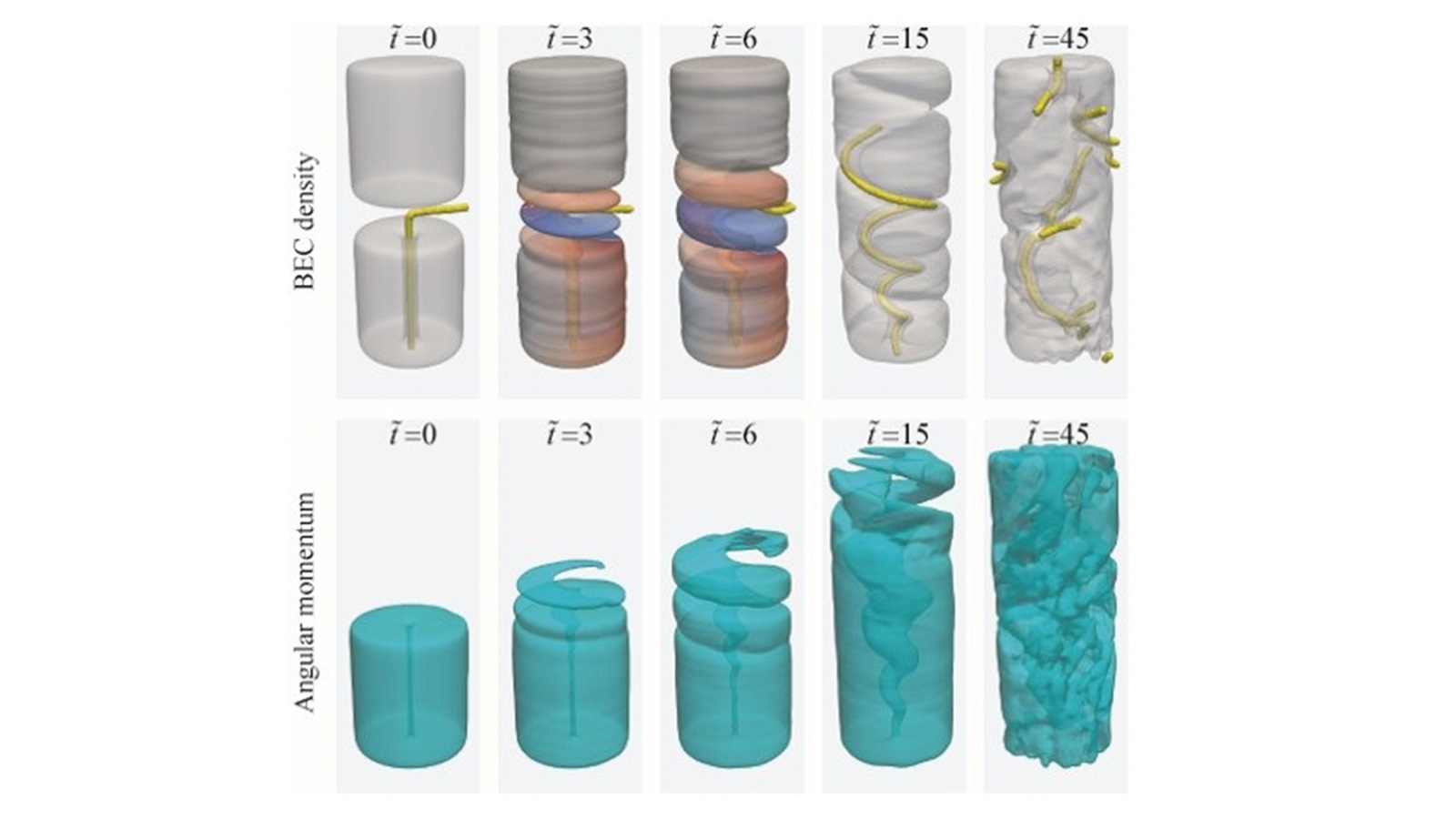 If a drop of creamer falls from a spoon into a swirling cup of coffee, the whirlpool drags the drop into rotation. But what would happen if the coffee had no friction — no way to pull the drop into a synchronized spin?

Superfluids — also called quantum fluids — appear in a wide range of systems and applications. For example, cosmological superfluids meld with each other during neutron star mergers, and scientists use superfluid helium to cool magnetic resonance imaging (MRI) machines.

The fluids have unique and useful properties governed by quantum mechanics — a framework usually used to describe the realm of the very small. For superfluids, however, these quantum mechanical properties dominate on a larger, macroscopic scale. For example, superfluids lack viscosity, a sort of internal friction that allows the fluid to resist and cause motion.

“It doesn’t just look like a corkscrew — its functionality is similar, too.” — Dafei Jin, scientist at DOE’s Center for Nanoscale Materials at Argonne

This lack of viscosity grants the liquids unusual abilities, like traveling freely through pipes with no loss of energy or remaining still inside a spinning container. But when it comes to rotational motion, scientists struggle to understand how rotating superfluids transfer angular momentum — a quality that speaks to how fast the liquids will spin.

In a recent study, scientists from the U.S. Department of Energy’s (DOE) Argonne National Laboratory collaborated with scientists from the National High Magnetic Field Laboratory (MagLab) in Tallahassee, Florida, and Osaka City University in Japan to perform advanced computer simulations of merging rotating superfluids, revealing a peculiar corkscrew-shaped mechanism that drives the fluids into rotation without the need for viscosity.

When a rotating raindrop falls into a pond, viscosity enables the drop to drive the surrounding water into rotation, generating vortices or eddy currents in the process. This viscous drag reduces the difference in motion between the two bodies. A superfluid, however, allows this difference.

“The atoms stay roughly in the same place when superfluids transfer angular momentum, unlike with eddy currents in classical fluids,” said Dafei Jin, a scientist at Argonne’s Center for Nanoscale Materials (CNM), a DOE Office of Science User Facility. ​“Rather than through the convection of particles, it’s more efficient for superfluid atoms to transfer angular momentum through quantum mechanical interactions.”

These quantum mechanical interactions give rise to a mesmerizing effect, exhibited in the team’s simulations performed using the Carbon computer cluster at CNM. The scientists simulated the merging of rotating and stationary drops of a superfluid state of matter called a Bose-Einstein Condensate (BEC).

“We chose to simulate Bose-Einstein Condensates because they’re relatively general superfluid systems that display characteristics shared by various other quantum fluids,” said Wei Guo, a professor at Florida State University (FSU) and a researcher at the MagLab.

Toshiaki Kanai, a graduate student of Guo’s in FSU’s Physics Department, led the design of the simulations, which model the interaction between two BEC drops from the moment they come into contact until they merge completely. Tsubota Makoto, a professor at Osaka City University and expert in quantum fluid simulation, also contributed to the project design and interpretation of the results.

“We were particularly fortunate to work with Dafei Jin at CNM, who helped us solve many technical challenges,” said Guo, a long-time collaborator with Jin, ​“and Argonne has computer clusters and other computational resources that allowed us to efficiently perform the simulation many times under different conditions to obtain systematic results.”

As the drops draw close to each other, the corkscrew shape spontaneously appears and extends into both drops, growing in size and influence until the two drops are mixed and rotating at the same speed.

“It doesn’t just look like a corkscrew — its functionality is similar, too,” said Jin. ​“It transfers angular momentum by twisting into the samples, causing them to speed up or slow down their rotation.”

The simulation result is applicable to many laboratory BEC systems of various sizes, from tens of nanometers to hundreds of microns — or millionths of meters. The results also hold true for larger superfluid systems. Despite differences in scale all superfluid systems exhibit common fundamental properties linked to their quantum nature.

“Although we focused on a very small system, the results are general,” said Guo. ​“The insight we gained into how these interactions occur can help physicists inform models of systems from nanoscale ultracold atoms to cosmological-scale superfluids in astrophysical systems.”

For example, superfluid helium can exist at the centimeter and meter scales, and BECs in neutron stars can be, well, astronomical in size. When neutron stars merge, they act as two very large, rotating superfluid drops in some respects, and the discovery of the corkscrew mechanism could inform astrophysical models of these mergers.

The scientists hope to test their theoretical discovery of the corkscrew mechanism through experiment. Quantum liquids have implementations in cold atom systems, superfluids, superconductors and more, and basic science research of their behavior will aid in development of applications of these systems.

A paper on the study, titled ​“Torque and Angular-Momentum Transfer in Merging Rotating Bose-Einstein Condensates,” was published in Physical Review Letters in March.

About Argonne’s Center for Nanoscale Materials
The Center for Nanoscale Materials is one of the five DOE Nanoscale Science Research Centers, premier national user facilities for interdisciplinary research at the nanoscale supported by the DOE Office of Science. Together the NSRCs comprise a suite of complementary facilities that provide researchers with state-of-the-art capabilities to fabricate, process, characterize and model nanoscale materials, and constitute the largest infrastructure investment of the National Nanotechnology Initiative. The NSRCs are located at DOE’s Argonne, Brookhaven, Lawrence Berkeley, Oak Ridge, Sandia and Los Alamos National Laboratories. For more information about the DOE NSRCs, please visit https://​sci​ence​.osti​.gov/​U​s​e​r​-​F​a​c​i​l​i​t​i​e​s​/​U​s​e​r​-​F​a​c​i​l​i​t​i​e​s​-​a​t​-​a​-​G​lance.