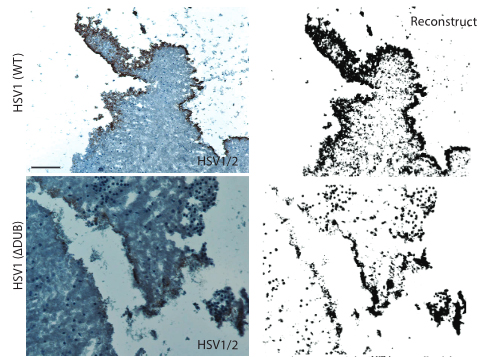 Herpes simplex virus (HSV1) infections are initiated at mucosal surfaces where the virus infects epithelial cells. When HSV1 spreads from the peripheral nerves and into the central nervous system, it can infect the brain and cause herpes simplex encephalitis, a rare disease with high mortality if left untreated. In most cases, the innate immune system prevents HSV1 brain infection, but HSV1 is sometimes able to evade the brain’s defenses. A research team from Aarhus University, University of Oxford, and University of Gothenburg, led by first author Chiranjeevi Bodda in Søren Paludan’s lab, discovered a molecular mechanism that helps HSV1 infect the brain, which they present in a study that will be published May 8 in the Journal of Experimental Medicine (JEM).

The stimulator of interferon genes (STING) protein plays an important role in immunity, and it is activated by a virus’s DNA during viral infection. STING initiates a cascade of cellular actions that help fight the invader. Those initial efforts include gene activation and production of cytokine proteins such as type I interferon (IFN) that boost the immune response. “HSV1 has evolved multiple mechanisms to evade the host cells’ induction of type I IFN,” Bodda explains, “but how HSV1 evades the type I IFN response in the brain were not well understood.”

The research team worked to identify proteins encoded in HSV1’s genome that promoted HSV1’s immune evasion in the brain. They infected mouse brain cells grown in culture with HSV1 mutants that were missing key genes, or whose gene activity was altered, and found that a HSV1 containing a mutated VP1-2 gene showed increased innate immune responses. Mice showed a similarly robust immune response against HSV1 with mutant VP1-2. This indicated that normal VP1-2 suppresses immunity.

The key difference between normal VP1-2 and the mutant VP1-2 was the mutant lacked its ability to remove a post-translational modification, called ubiquitin, from other proteins inside host cells after it infects them. Ubiquitin is one of several post-translational modifications known to modulate the STING cascade’s immune response. The team found that VP1-2 was targeting the STING activity in brain immune cells, known as microglia. The team further showed that VP1-2 can directly remove STING ubiquitination, which prevented STING from being activated for signaling. “Before this study there was no knowledge on viruses altering ubiquitin in the brain’s immune response,” Paludan says.

“Our study shows that HSV1 targets STING ubiquitination in the brain to promote viral infection and potentially progression to herpes simplex encephalitis,” Bodda says. “A drug that inhibits the virus’s ability to remove ubiquitin could allow brain cells to mount an efficient antiviral response against HSV1. This could especially benefit immunocompromised patients with severe HSV1 brain infection, particularly in cases that are resistant to the standard acyclovir treatment.”

Paludan adds that though the study focuses on herpesviruses, there are parallels to the coronavirus and relevance to the COVID-19 pandemic. “Our results lead us to hope that if we can prevent viruses from blocking STING, then we can prevent the virus from replicating. That could pave the way for new principles for treatment of herpes, influenza and also the coronavirus.”

About the Journal of Experimental Medicine

The Journal of Experimental Medicine (JEM) features peer-reviewed research on immunology, cancer biology, stem cell biology, microbial pathogenesis, vascular biology, and neurobiology. All editorial decisions are made by research-active scientists in conjunction with in-house scientific editors. JEM provides free online access to many article types from the date of publication and to all archival content. Established in 1896, JEM is published by the Rockefeller University Press. For more information, visit jem.org.