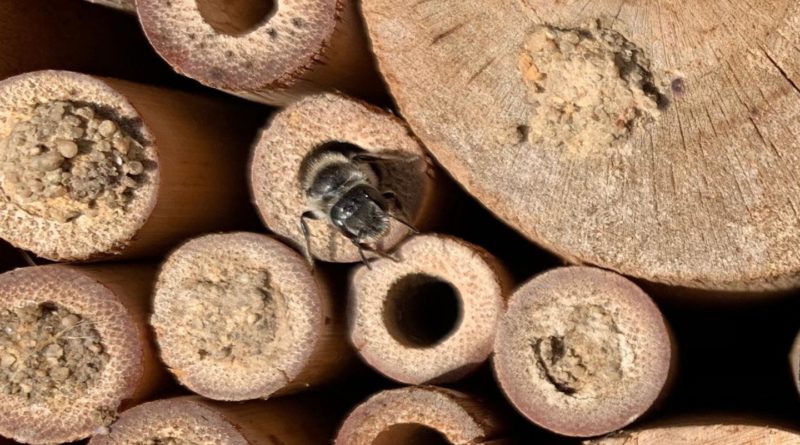 An apple plantation in spring. The trees are in full bloom. But to ensure that they also yield in autumn, workers have to do a real fluff job for weeks: each individual flower is manually pollinated with brushes – because there are no bees left to do the job. Not a nice vision of the future. But in some regions of China this is already reality. And the disappearance of the bees is reported all over the world.

The exact reason for the bee mortality is not known. Pesticides from agriculture, destruction of habitats, pathogens – probably several factors play together. A research group at Julius-Maximilians-Universität (JMU) Würzburg in Bavaria, Germany, is now focusing on another factor. It is the bacteria that live in and with bees. Many of them are important for the health of bees. If they suffer, so do the bees.

Many relationships between bees and bacteria

The intestines of honeybees, for example, contain bacteria that help digest food and stimulate the immune system of the insects. The beehive also contains useful microbes, some of which produce antibiotics, thus preventing the spread of harmful fungi.

“Most research in this field is devoted to social bees, especially the western honey bee Apis mellifera,” says Dr. Alexander Keller of the JMU Biocenter. Solitary bees would have experienced only little attention. These are pollinators of great ecological importance for the environment and agriculture. More than 90 percent of the 17,500 bee species known worldwide are solitary bees.

Honeybees only suitable as a model to a limited extent

According to Keller, considerably more research is needed to better understand the relationship between solitary bees and microbes and thus perhaps better combat bee mortality. Many species of solitary bees are threatened or already extinct.

Until now, research has been based on the assumption that the knowledge gained from honey bees can be transferred to solitary bees. However, this is only possible to a very limited extent, despite some fundamental similarities. This is the conclusion reached by the JMU research group in a review article published in the journal “Trends in Microbiology”. It summarises the current state of research on bees and their microbial associations.

The central finding is that solitary bees are much more strongly influenced by environmental factors and human-induced changes than socially organised bees when establishing their relationships with microbes. The consequences of climate change, agricultural changes and habitat degradation, for example, have not yet been clarified and require research specifically adapted to solitary bees.

Alexander Keller and his team are currently working with the JMU Chair of Zoology III (Animal Ecology and Tropical Biology) and international partners to investigate the landscape ecological factors that influence the microbial associations of solitary bees.

This part of information is sourced from https://www.eurekalert.org/pub_releases/2019-08/uow-hbl082719.php